as in pulling his baseball card from a pack.

That's what I did today when I picked up my first Series 2 cards. I always like opening a pack of baseball cards on the day of a baseball game.

The top card was tonight's starter for the Tigers, Drew Smyly, and a very good baseball card it is: 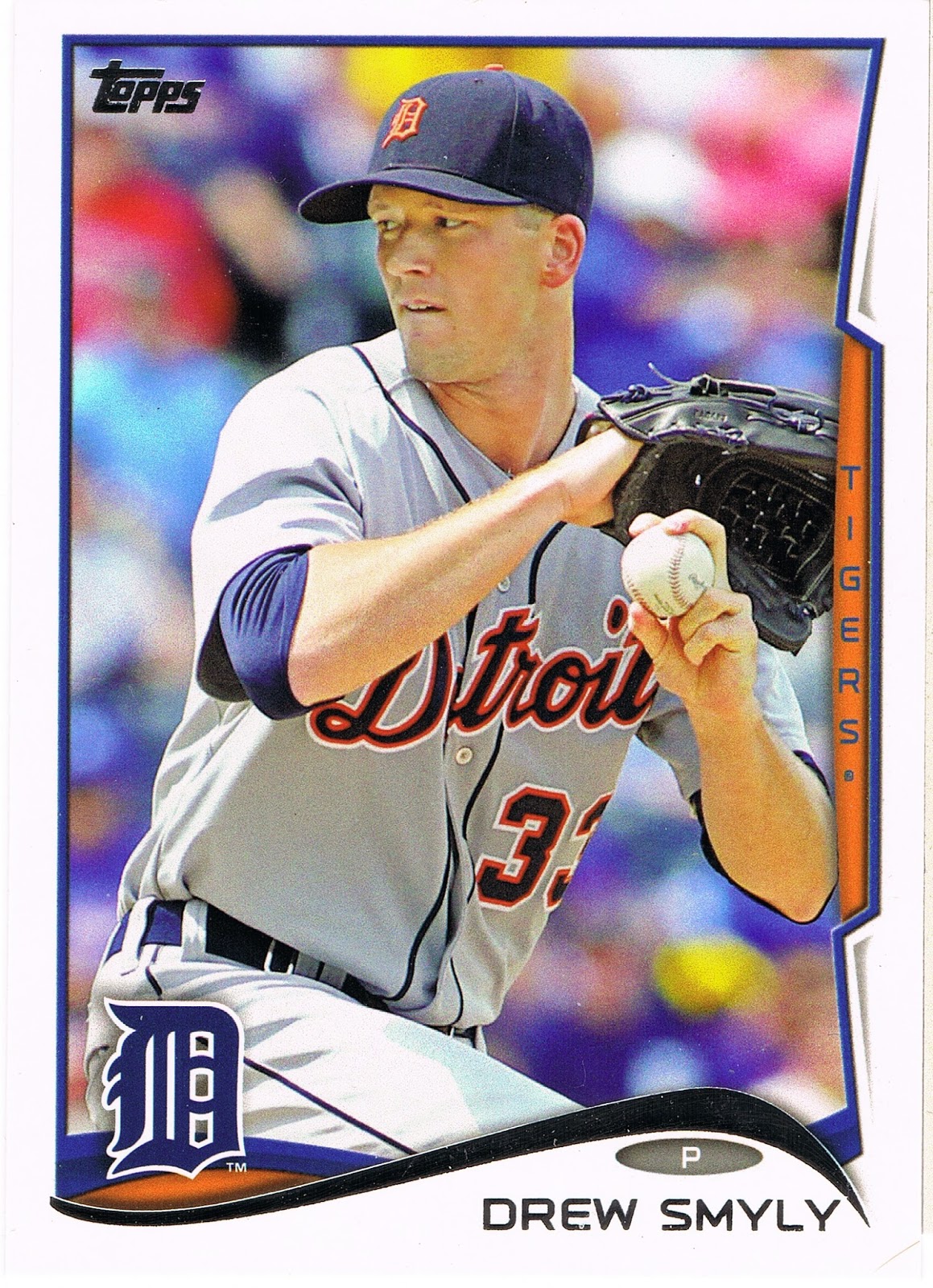 This is probably the best "pitching grip" card I have ever seen. That is because it is a live-action image, so that is a real, game-used grip on display there. The card has plenty of imminent motion built into it, as your brain connects the dots on what Smyly's arms are about to do next. I think the foil wave (has anyone named this set yet?) of the design works especially well with the lines set up by the right forearm, and the line of his eyes focusing on the plate.

All those nice composition elements working together on yet another zoomed-in torso card - sometimes this approach to making a baseball card does work out very nicely.

I thought it was also serendipitous that I pulled Drew's card on his birthday today. Unfortunately the Topps Voodoo was not strong enough to make a happy ending to this post with a W for Smyly and the Tigers, as Drew took the loss despite giving up just a single Home Run and 3 other hits over 6 innings.

I pulled a more traditional "grip" card in my other baseball card purchase today. The tradition with these cards, going back to the 1950s, is to include the grip on a posed shot, like this one: 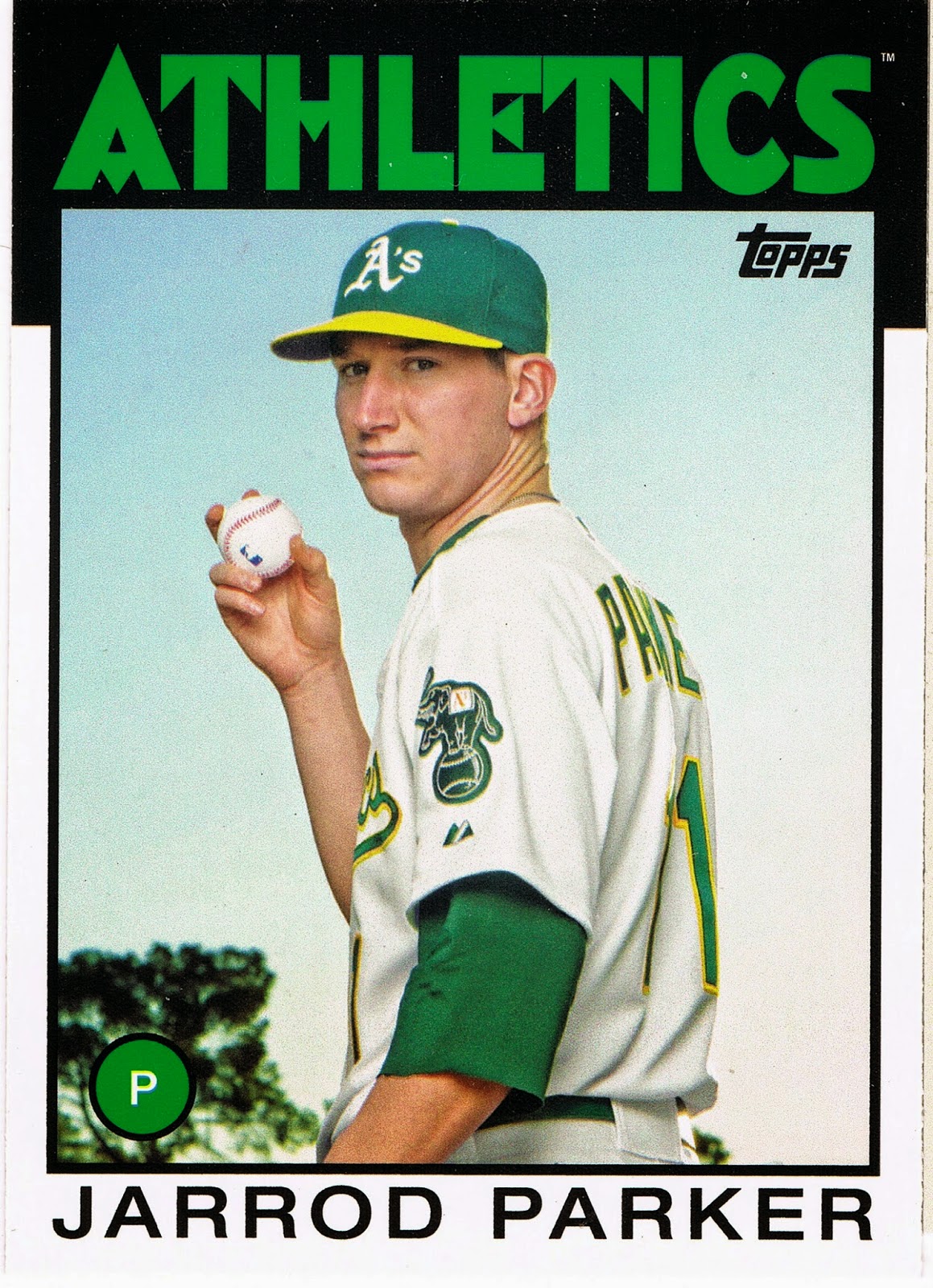 I'd have to say I'm about as excited about that card as Jarrod appears to be. Though I do like black borders on cards so I can be amused by all the whining about the terrible chipping. I also like Oakland's elephant appearing on cards, and I also like mysterious trees on baseball cards. Probably this card will grow on me over time.

It took me quite awhile to ever find any Archives for sale this year. I have been traveling for work waaaaaaaay too much with no time to stop at an LCS, and 2 of the 3 Big Box stores that I frequent for my plastic-y foil ripping fix don't seem to be carrying Archives at all this year. Only Target seems to have them - and I have also only found Opening Day cards at Target this year as well. Topps seems to have probably lost a few truckloads worth of sales to Wally World, I think.

I picked up some Archives because I like the 1980 design and will probably put together those 50 cards. But of course what you desire and what you pull out of 'packs' of baseball cards are two different things. From 72 cards I should have ended up with 18 of the '80 base design. Instead I got 6 - way off.

At least I got the Cabrera and the Kinsler I wanted; even a double of the sweet Miggy card.

As always I'm looking forward to sharing some more cards with y'all, but I will be back on the road tomorrow. I will be able to get a few trade packages out first, and that will be about it for baseball cards until July. 162 games is a long season, and I admire the baseball players that travel all year to entertain me. After working in 9 different states so far this year, I certainly know parts of what they go through. At least my cards wait patiently in all their little stacks for that nice day when I can finally un-stack them into their binder pages…what a relaxing day that will be, someday.
Posted by BaseSetCalling at 12:29 AM
Email ThisBlogThis!Share to TwitterShare to FacebookShare to Pinterest
Labels: 14 Archives, 14 Series 2