Bad news in the Base Set

Hello there, nice to 'see' you. I am fine and still collecting baseball cards. Not much actual news for me; it is still hard to keep up with cards and particularly, blogging, while I travel around for Forestry work all the time. But I figured right now at another one of the very peaks of Aaron Judge mania would be a good time to check in with y'all.

I am, however, pretty disappointed with some new baseball cards I just purchased.

Ever since the 1960 Topps Baseball card set, Topps has seemed very proud of their "All-Star Rookie" teams, originally "selected by the youth of America." I don't have a 1960 Topps All-Star Rookie Cup card to show you unfortunately, though I hope to some day as I collect such cards. But I was happy to find this in a pack of cards I purchased in 2008: 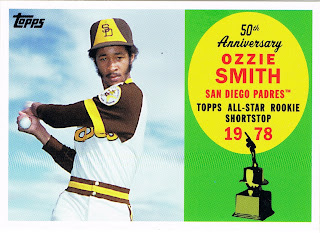 Which is a great representation of the 1960 cards, issued as an insert set in 2008, and one of the rare insert sets I will be collecting to completion. There were 50 years to celebrate in 2008 because the 1960 cards actually honor the performance of the Rookies in the 1959 season. This can always cause a little confusion when discussing Topps All-Star Rookies.

They even used the Rookie Cup to run a contest that year: 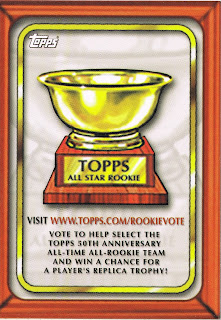 I have always enjoyed collecting these cards. Usually falling as a player's second card in the "flagship" Topps set, they aren't expensive in this Rookie Card driven Hobby. So I collect them a bit randomly; I found this one in a re-pack product at the $1 store just a few months ago - 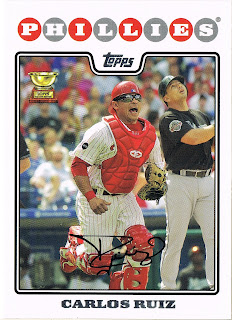 Eventually, I hope to assemble the whole "team" for each year, like this: 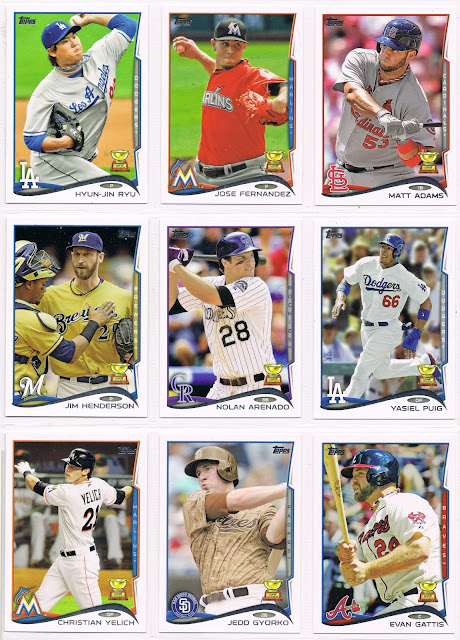 (with apologies to Jose Iglesias and Wil Myers, as 11 cards don't fit; a bit of a vexing problem for storing these cards)

There have been gaps in the history of placing the Cup on the cards over the years, but if I recall my web references read just a few minutes ago, it has been a constant on the cards since 1987.

This year started off the same, with 2 cards featuring the Cup on the very first 'page' of Series One (Corey Seager and Gary Sanchez), and also one on the last page - 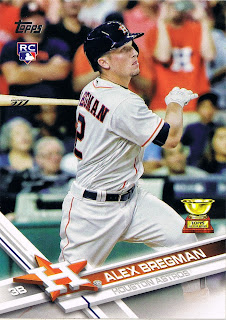 But after the Series One release, things started to change: 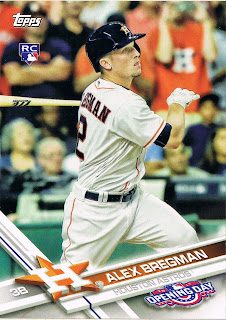 At first one might think this was a conscious decision, to just use the Rookie Cup in the regular set, the "Flagship" (I am not a big fan of that term). But that wouldn't make a lot of sense, to remove the Cup from a cheap set still theoretically aimed at "the youth of America." Normally, the Cup is part of Opening Day, and other products using the base cards, like this one - 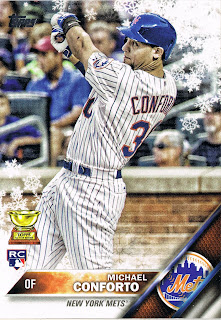 I like these 'double dip' cards for a player that was called up and played like gangbusters before Topps could even issue an RC logo card - probably another new small specialty collection I will chase and 'binder up' together. I don't think there are very many such cards.

The Opening Day set of course gives you a 'sneak peak' at the cards still to appear in Series 2. Sometimes these are unique cards with images all of their own; the Gary Sanchez Rookie in 2016 is a good example of one that may become slightly sought after, as it was his first true pack-issued RC I believe, with an image that varies from his Series 2 card (though only in the zoom/crop). Generally however Opening Day cards are almost completely ignored by $$$-obsessed collectors.

Still, it is nice to get an early look at all the stars of the game, during Spring Training, 3 months before Series 2 is released, like this very exciting young player: 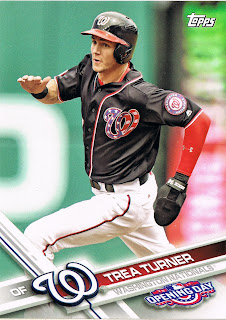 And this is where I believe a problem crept into the production of my brand new Topps 2017 Series 2 Baseball Cards: 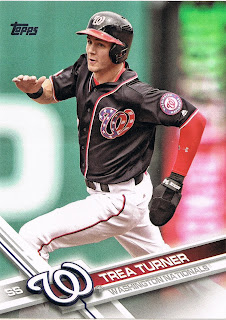 Because back in January or so, the full 2016 Topps MLB All-Star Rookie Team was announced as:

And now we are left with a 2017 Topps Baseball Card team of just 5 of the 11 All-Star Rookies, in terms of being the oh-so-desirable "on card".

And there will always be errors in the production of a set of over 1,000 cards now, across Series 1, Series 2, and Update, like this card: 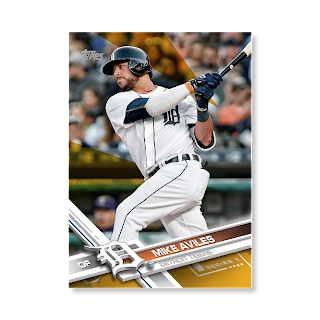 Aviles was traded, at a level just barely above a DFA transaction, to the Braves last --- August! 2016! On the back of this card it says "ACQ: TRADE WITH TIGERS 8-16-16" - quite a neat trick, acquiring a player by trading with yourself. I know Topps never pays much attention to the Detroit Tigers and I really wish they would give us some new Alan Trammell or Kirk Gibson cards in the inserts and subsets instead of yet another inevitable round of Kaline/Verlander/Cabrera. Though it is not really Topps' fault that few of the Tigers' personnel decisions have been working out lately and no one really wants cards of scrubs/commons aging out of the game. Like Mike Aviles.

Such small errors are to be expected I guess, and the New York Mets will always get more Topps Love than any other team too, most likely.

Right now though, Topps is making a lot of money. They have finally, and not entirely unpredictably, moved into the memorabilia market as direct sellers of individual cards, rather than just issuing them as parts of cases and boxes. Selling autographed, limited edition Topps Now cards directly to collectors has got to be extremely profitable. And I am very happy for Topps, because what is good for Topps is good for me and my collections of those cheap "low end" baseball cards most collectors completely ignore.

So baseball cards are still fun for the people who derive their enjoyment from buying a card for 25 cents and watching it grow in value. I am also very happy for those types of collectors, because again what is good for people who collect 'financially', let's say, is also good for me.

I just hope with all this money being made, the ultimate cost of the "worthless" cards I actually keep and enjoy can remain low. I doubt there will be very much 2017 product on the discount shelf next year.

And more importantly, that certain key details can be covered correctly. Perhaps there is still time to do so in the Update set, which should have plenty of room amidst all the padding in that product.

It's a small world, after all, and I can continue to daydream that some of the small things can still be delivered, for the small collectors, like me.


Posted by BaseSetCalling at 1:32 PM
Email ThisBlogThis!Share to TwitterShare to FacebookShare to Pinterest