I missed baseball cards so much a few times this year that I was glad to find a sweet, sweet stack of 100 cards that came out of a $5 repack sometime last year. Though I had enjoyed the cards when I first purchased them, I hadn't really finished absorbing ALL of the treasured details they held, like this one: 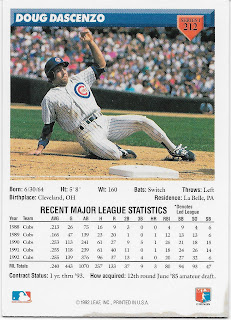 That's a 100% worthless off-center water damaged 1993 Donruss "common" with a wonky corner. Until I flipped this card over, I would peg several early Upper Deck sets as the champions for including a good photo on the back. But this is an excellent application of the idea and I will be paying a little more attention to these card backs when they randomly appear in my hand now. I also always like Donruss card backs that include 'Contract Status' - a key detail for every player that I am always interested in, but Topps never (?) is.

This image though - what is Dascenzo up to here?

I just don't think he is going to reach Third Base safely there. Which made me nominate him for the post title up there.

There is a hint of a shadow of the actual third baseman showing in the bottom right corner of the image. Now my first hunch is that Dascenzo is trying to break up a Double Play perhaps. Is another runner on his way to 2nd behind him? If the ball was hit somewhere, why isn't the batter showing on his way to First Base on the other base line off in the distance? Is this a Steal?

Yet if the Third Baseman is so far off the base that his glove is nowhere near the base - why is Dascenzo so far offline with his slide? Attempting to break up a Double Play is expected of runners coming in to Second Base, and that makes for many a good baseball card.

But here at Third ... wouldn't your team rather have a man on Third, safely, even if that allows a runner to reach Second or First afterwards?

This card also makes me wonder if the "Neighborhood Play" is allowed at Third Base, with the newest version of it, or however that was called (was it?) twenty-seven years ago.

Overall neither the base runner nor the anonymous Third Baseman seem very interested in the actual base that should be the goal of the action here.

One of my new 2020 Series Two cards supplies a more expected view of this baseball action vignette: 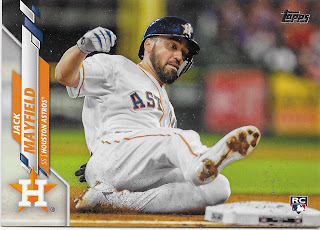 Now that is how to make a horizontal baseball card. No matter how I feel about any given design of any Topps set, those sets always do manage to include baseball cards I like very much. Even for a Rookie I have never ever heard of and suspect I will never ever hear of ever again.

Now in all fairness to Doug Dascenzo here, I should show the front of the card: 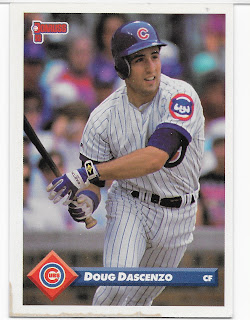 Overall I have never really warmed up to 93 Donruss even though it is a clean functional design with nice colors and a nice combination of baseball iconography (the base) and team logo. But the whole thing just says so plainly "Look Ma, I bought a Personal Computer" that clearly pegs it to a time in my life when I was walking away from personally computing and starting to embrace living and working outdoors instead.

So like all of the random sets that appear in random stacks of "re" packed cards that I like to purchase when I can (very difficult this year, of course), I have just been filing away all copies of 93 Donruss cards I run across until I get such a huge supply of Free Time that I can pick out my 9 favorites to file away in my personal baseball card archives. Except for this set, I am starting to lean towards placing them in the binder page "backwards."

Posted by BaseSetCalling at 10:25 PM
Email ThisBlogThis!Share to TwitterShare to FacebookShare to Pinterest
Labels: 20 Series 2, Horizontal, How Not To Do It