But I made it all the way home finally, for the first time in 5 months. To where the bulk of my baseball cards live.

And my scanner, as in an actual sheet of glass with a cover real-deal scanner. So I scanned a card for you to ponder: 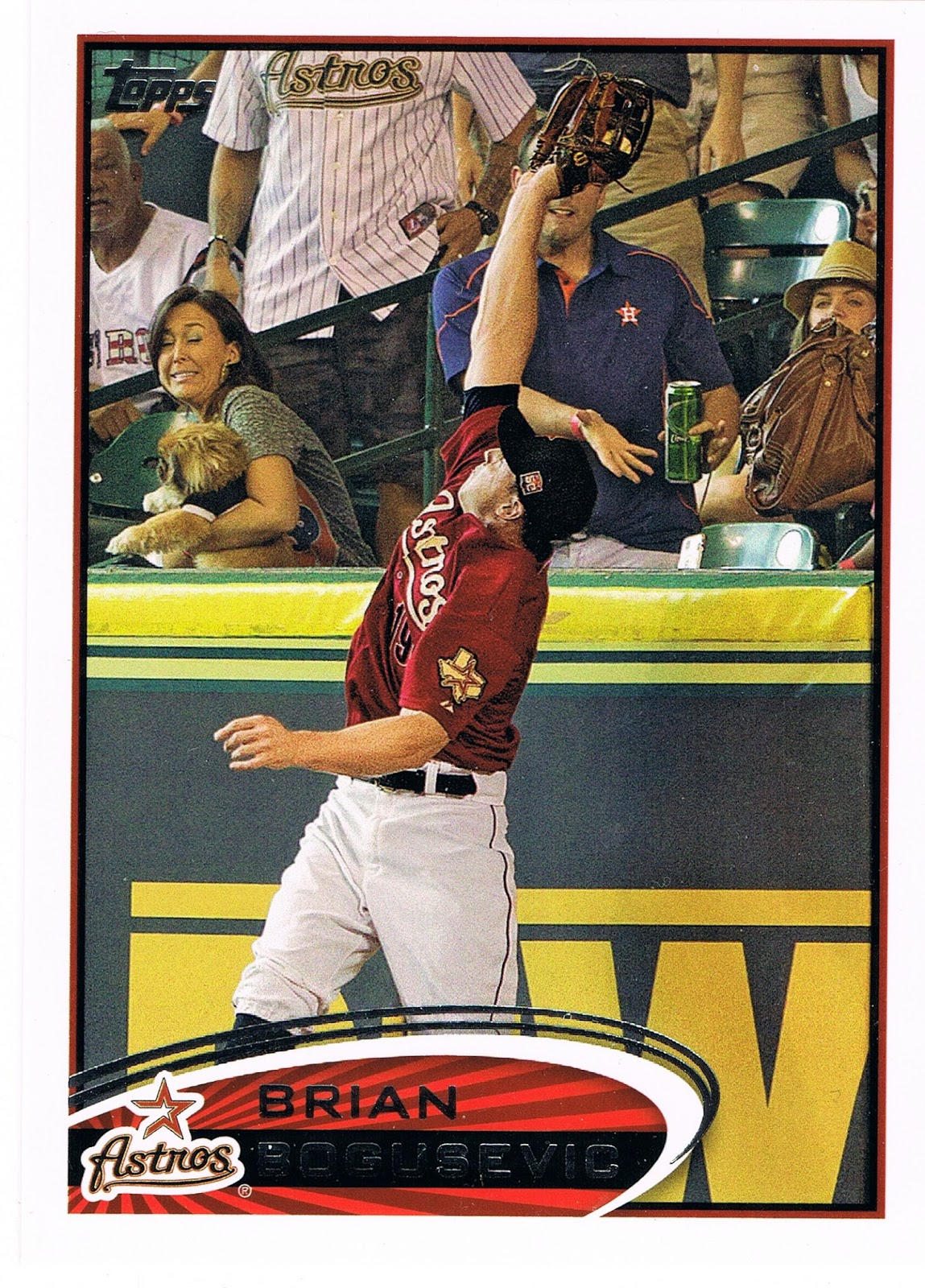 I have loved this card since the day I pulled one from a pack. Because of course, it has A Lot Going On.

At this point though, I have to stop and acknowledge a source I borrowed for the format of my blog; awhile back I noticed one of my other main card blog reads just over to your right there doing this. Repeating a post title with a sequential # is of course borrowed from the card blog that got me blogging, which else but the inimitable Night Owl Cards.

I really liked 2012 Update for some reason. I put it together by simply purchasing pack after pack. I can't remember what I was chasing in it, or why, but looking back on the binder pages now, well that is an enjoyable activity. It is definitely binder worthy. I am starting to have my doubts about that on a few other collecting efforts I have ongoing.

That's Brian Bogusevic there on that card, as even my sorta pro scanner can't handle foil-on-black. Bogusevic had been traded to the Cubs not long after '12 Update was released, though of course he still ended up on an Astros card in 2013 Series One. Which begat him a Cubs card in '13 Update. Perhaps that created the mojo that had him shipped to the Miami Marlins last November, in exchange for the ice-card man Justin Ruggiano. Topps seemed to know the future on his career as he was left out of '14 Series One and he reportedly had a tough go of it in Spring Training this year. He is currently "raking", as they call it, back down in AAA, but Miami is loaded with young outfield talent and I'm not quite sure why they felt the need to trade for Bogusevic to start with.

Be that as it may, this will always be one of my favorite surfboard cards. I always like cards showing the railings in the stands - they set up a great sense of the lines of the image.

What is that exec up to anyways? Drinking a beer in the stands? How many baseball cards show an actual container of beer? It looks like a tall-boy of Heineken to me, but let's go to the Zoom and find out: 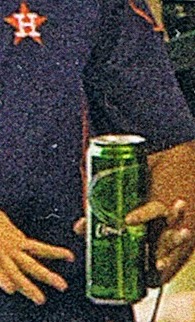 Hmm, could be one of those energy drink things the kids today are all so addicted to that they can't figure out why they don't have any money to spend on sensible things like baseball cards. I'll just always presume this is a can of beer though. Beer and baseball, mmm-mmm.

But that is just ho-hum compared to what else is happening on this card. Over to the left of the would-be drinkin' exec, it appears a now somewhat frightened fan brought her dog to the game. A dog on a baseball card? I know that happened in those wacky 90s, but in the stands? Let's make this laptop in my lap earn it's keep: 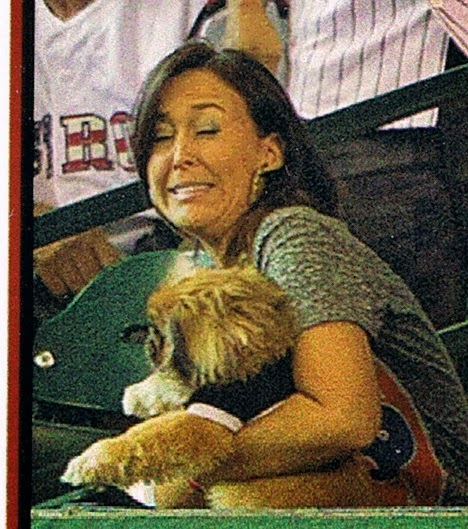 Rover's arm looks a little stiff there, must be … stuffed. ? A stuffed animal on a baseball card? Surely even the 90s couldn't have accomplished that?

And what is going on with that stuffed dog anyway, it appears to be wearing something. It has multiple colors and some sort of number or icon, much like a … baseball uniform. Four uniforms?

And that older gentleman calmly checking out this sweet catch by Bogusevic (the baseball appears on this great card too - it is snagged safely in the glove), he is wearing something that sure looks to have an S-T-R-O on it - A-S-T-R-O-S = another uniform. Five different uniforms on one card? That has to be some sort of record. Four from the same team, even an All-Star Game card couldn't achieve that.

Then we have a final mysterious element: 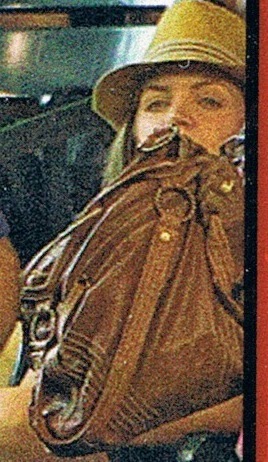 So What IS That? A coat? A purse? And what's in there? If Bogusevic doesn't make this catch, is this person going to bring the pain down upon him somehow?

And Who IS That? Looks nicely "Chinese-Eyed", an expression from my youth which had nothing to do with ethnicity. Is there a bong in that coat-purse thing? Is Lindsay Lohan a let's-go-to-the-stadium baseball fan? Nice hat.

I like cards with lots of mystery elements; I still like the very first one I found, and I must admit one reason I finally got around to blogging up this 2012 card is that I want to simply show-off a recent acquisition of a special edition of the card I wrote up in the first installment of this series. I didn't make it on time for an apropos anniversary posting a few days ago, but I am just tickled, of course, pink: 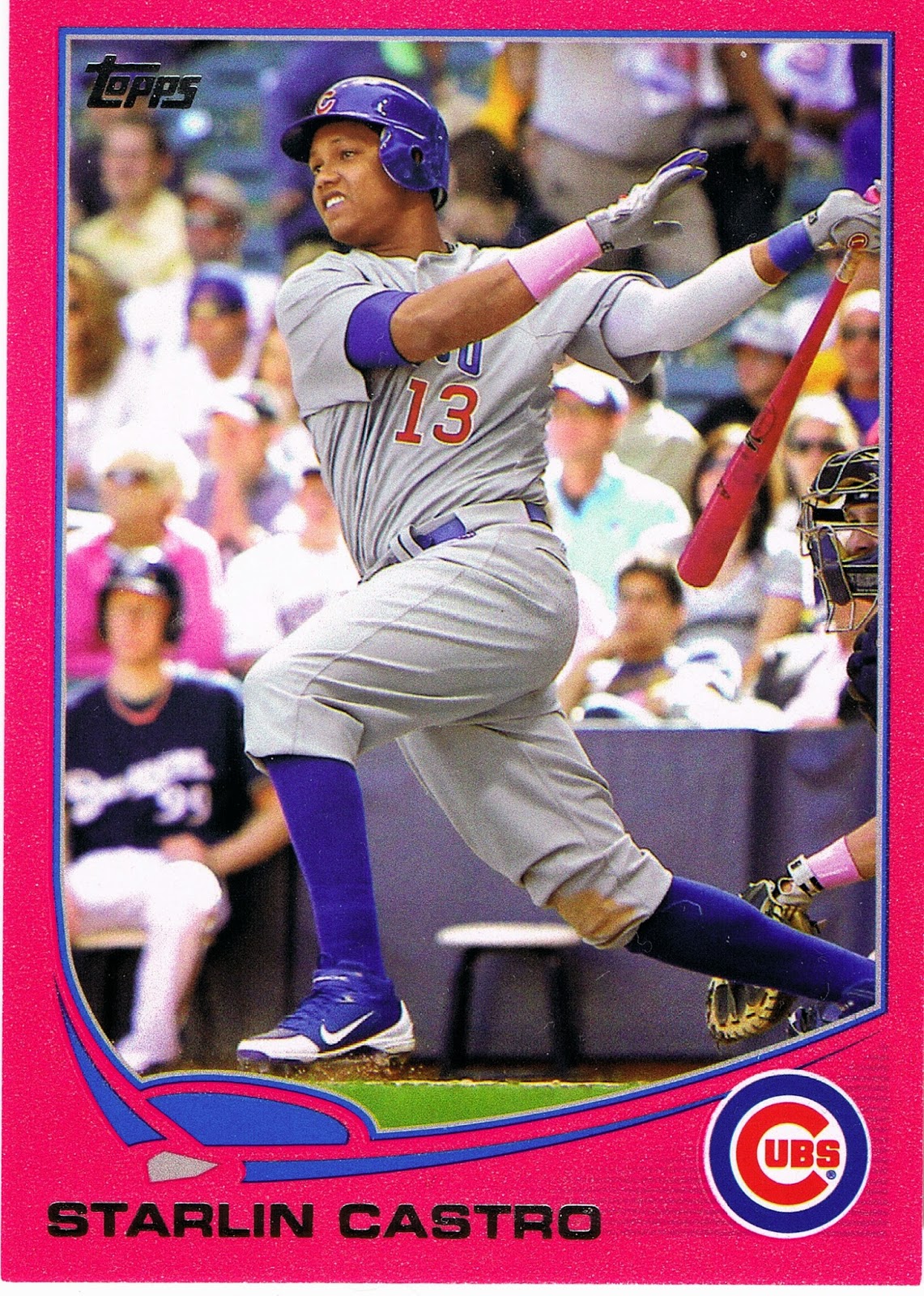 Posted by BaseSetCalling at 1:12 AM
Email ThisBlogThis!Share to TwitterShare to FacebookShare to Pinterest
Labels: 12 Update, 13 Series 1, A Lot Going On, Lines, Parallel Problem, What IS that?