Collecting baseball cards is always idiosyncratic. That is, it's uniquely personal. This page of my 2013 All-Parallel collecting project illustrated that to me well, as this was a key page that led me to decide on the color 'rules' for this project as I discussed in the last post in this series, #5.

Why is this post #7? Because of idiosyncrasies. It was time to match up the post # with the page #s I have completed, as the stars and moon weren't aligned on those any more; i.e. the #s didn't match.

May I present Beguiling Binder Page #7: 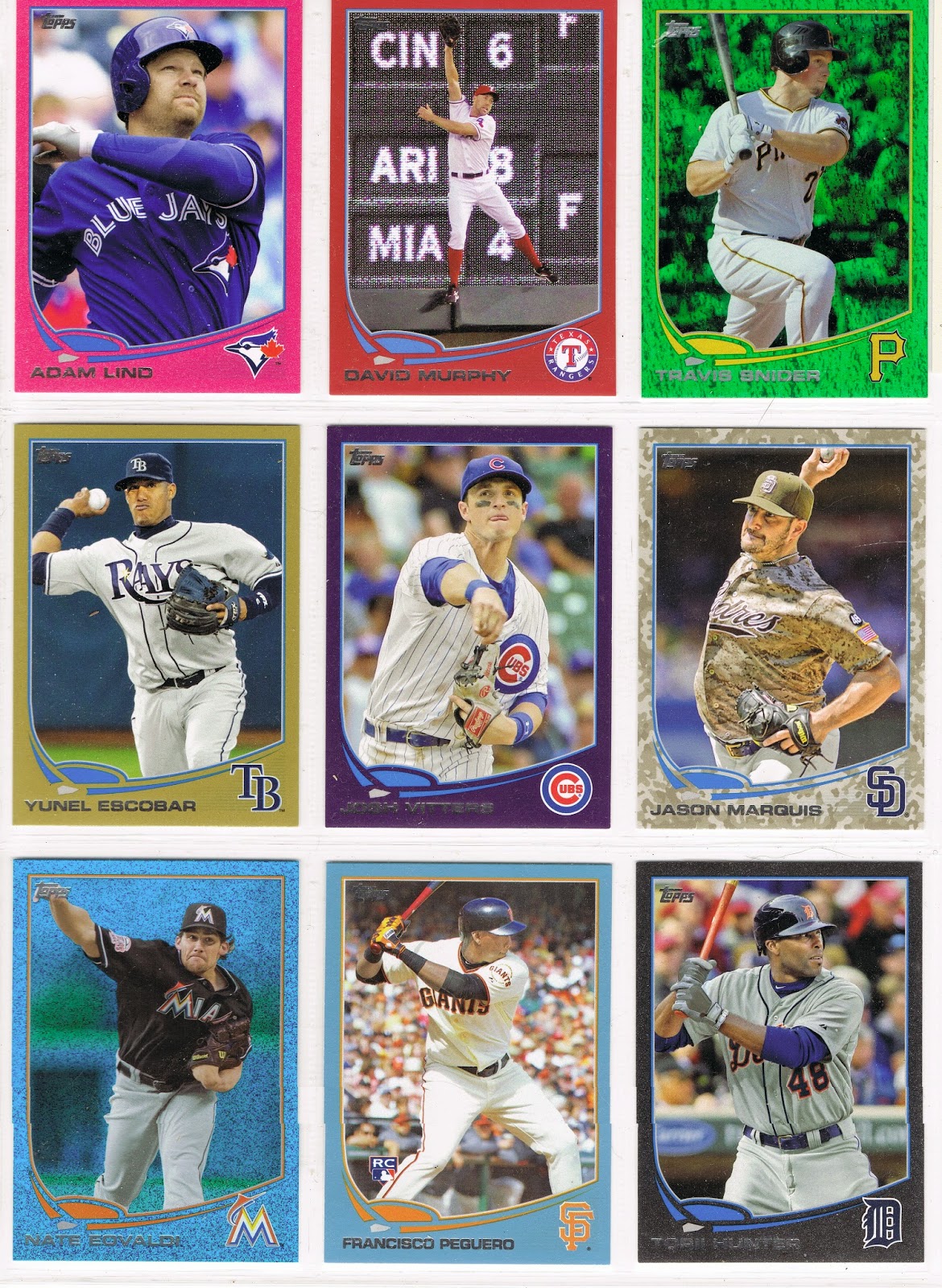 As always, don't forget you can click on an image on a Blogger blog page for a bigger view of the pretty colors.

I had to re-acquire two cards on this page to conform to those color rules - the David Murphy, and the Torii Hunter, which became the 'keystone' card on this page. When I first started picking up the wonderful "Blue Sparkle" parallels Topps produced last year, I knew I would want Murhpy's edition in that style to see how the scoreboard backdrop looked. And it was (and is) a cool card for the potential Legend of Cardboard. But it was a blue Sea Turtle on a blue parallel - broken color rule. Start over.

I had a worse problem with the Torii Hunter card - it was the only one on this page included in the Opening Day set and available as a "Blue Foil" parallel. Even worse, there were 6 blue Sea Turtles on this page. Really start over.

Fortunately, the Jason Marquis card decided itself as I automatically went for the Camo-Camo combo on any Padres card I could. (I still need the Ian Kennedy Camo from Update). It is also fortunate that I really like the Cubs on Purple even though that is a little similar to their blue Turtle diamond. And I like Pink for the Blue Jays as they are both easy to acquire from Americans who have a hard time shipping singles to Canada, and it works out well with their solid-blue alternate home uniforms as on the Adam Lind card there. I'm also happy to assign Nate Eovaldi to Sparkly world as I generally like his cards. Finally a month or so ago on a rare, short visit home I was able to surf eBay a little and pick up a hobby-only Black border copy of Hunter and the page was complete.

My project is a long way from complete in terms of pages, though many pages are at 8 cards. But it will still be a long project, I know, especially as I am about to enter another baseball card slowdown. I am moving tomorrow and some family is coming to visit my town for a week. I'll be playing with some cards, but they will be Magic:The Gathering cards as my nephews are little wizards at that game. Not my thing, but they were pretty stoked when I showed them binder pages last summer, so I know they are bringing their decks this summer. So the blog will go back to it's now usual slow pace for a bit, sigh. I have a lot of fun things lined up to bloggle about, as soon as I can.

In other blog news, I had to correct an error in my last post about the Junichi Tazawa cards, so I just used the Update function to sort all that out. I spent 20~30 minutes with Google and various websites researching that one, but that didn't quite get-er-done, as I discovered while wandering card blogs the next day.

Ahh well, you win some, you blog some, you lose some. See y'all again soon.
Posted by BaseSetCalling at 12:30 AM
Email ThisBlogThis!Share to TwitterShare to FacebookShare to Pinterest
Labels: Beguiling Binder Page