Beam Me Up, Scotty

I've been half-heartedly looking for this card for a long time. I knew I would find it, but I had no way to know which card it would actually be: 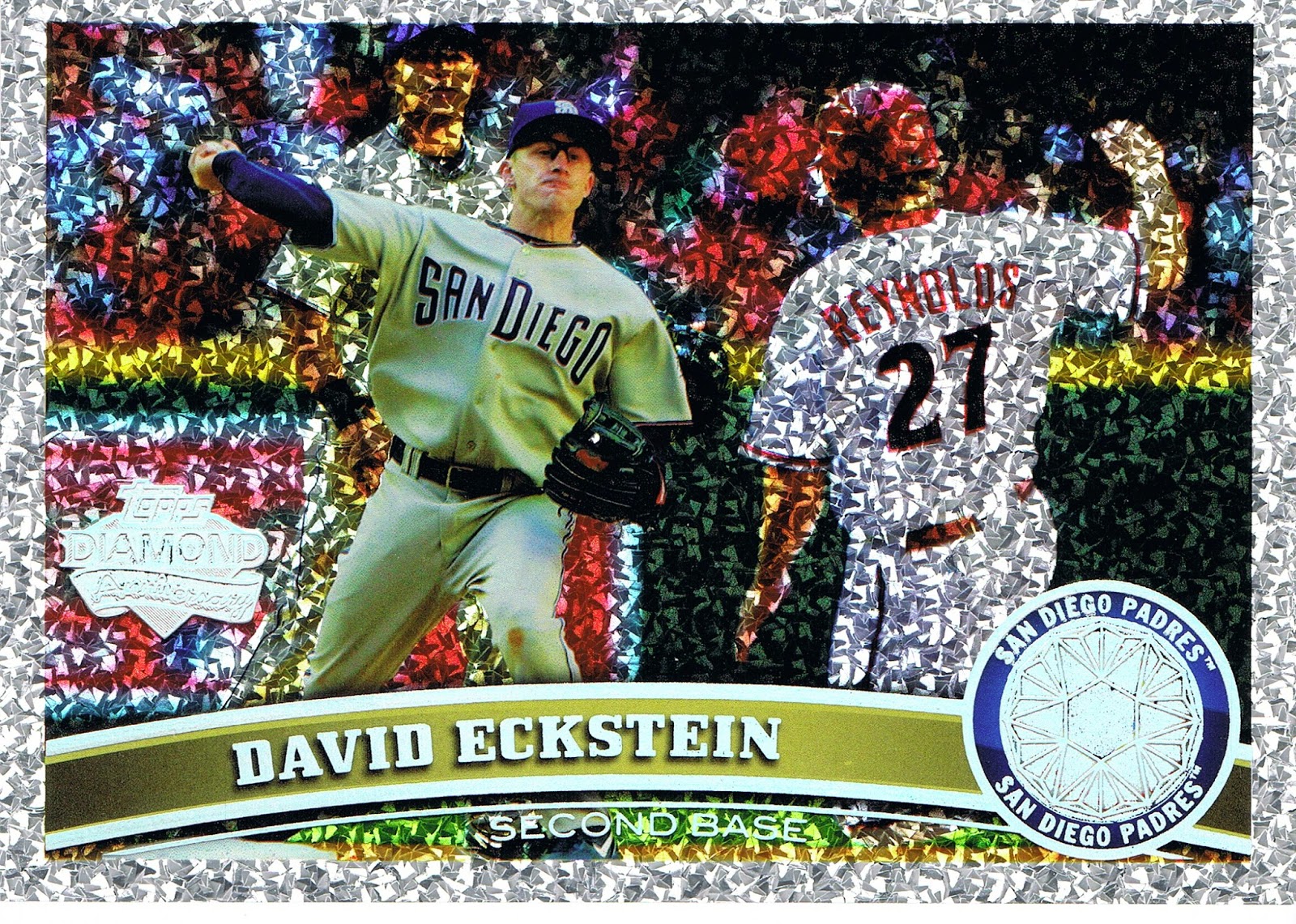 I think you can probably connect this card to the title of this post. Unless, perhaps, you are also too young to not understand the reference when a bald guy says "Make it so."

That's Strike-Out King Mark Reynolds starring on this card as he is about to be whisked aboard the USS Enterprise, from back in the days when he played for the Diamondbacks. Reynolds surfaced on First Base in Milwaukee this year, another marcher in the long parade of nothing at the position for them, outside of the years it was manned by someone named Cecil, or the son of someone named Cecil. Lately the ennui of that carousel is even affecting the guy just across the chalk line attempting to guide the players from the Coaches Box, as they told their 1B Coach to hit the road recently. Though when you think about it, how you can screw up relaying signs from the home dug-out to right-handed hitters bad enough to get fired? What else does a First Base Coach even do?

But I digress. I'm sure you're not surprised. Of course, this is actually a David Eckstein card, and the last thing I ever want to collect, or one of the oh so many such things these days, is David Eckstein cards. The man who seemingly single-handedly destroyed my beloved Tigers during the only World Series this century where they managed to win a single game. It's not easy watching your team being beaten by a guy who is only 5' 7" tall. When Jose Altuve finally achieves his Free Agent freedom from Houston and does this to your team in some future World Series somewhere, you'll know what I mean.

So I like how the 60th Anniversary Diamond Parallel is soooooo sparkly and shiny with lots of shiny colors, too, and you are starting to wonder just what Reynolds will say to Captain Kirk when he meets him, that you forget all about David Eckstein on this card. Well done, Topps. Or, perhaps, Scotty picked the wrong guy, though by 2010 it was too late for Scotty to fix things for me. Unless he activated some sort of time-space flux distortion field….the Enterprise was always good for messing around with Time. Maybe there's hope for the 2006 Tigers yet.

I hope to find more of these cards. Normally the baseball players that get sent to some bizarre tale in outer cheese-fi movies all in the mind of some demented baseball card collector, well they are much more anonymous, as on another recent acquisition: 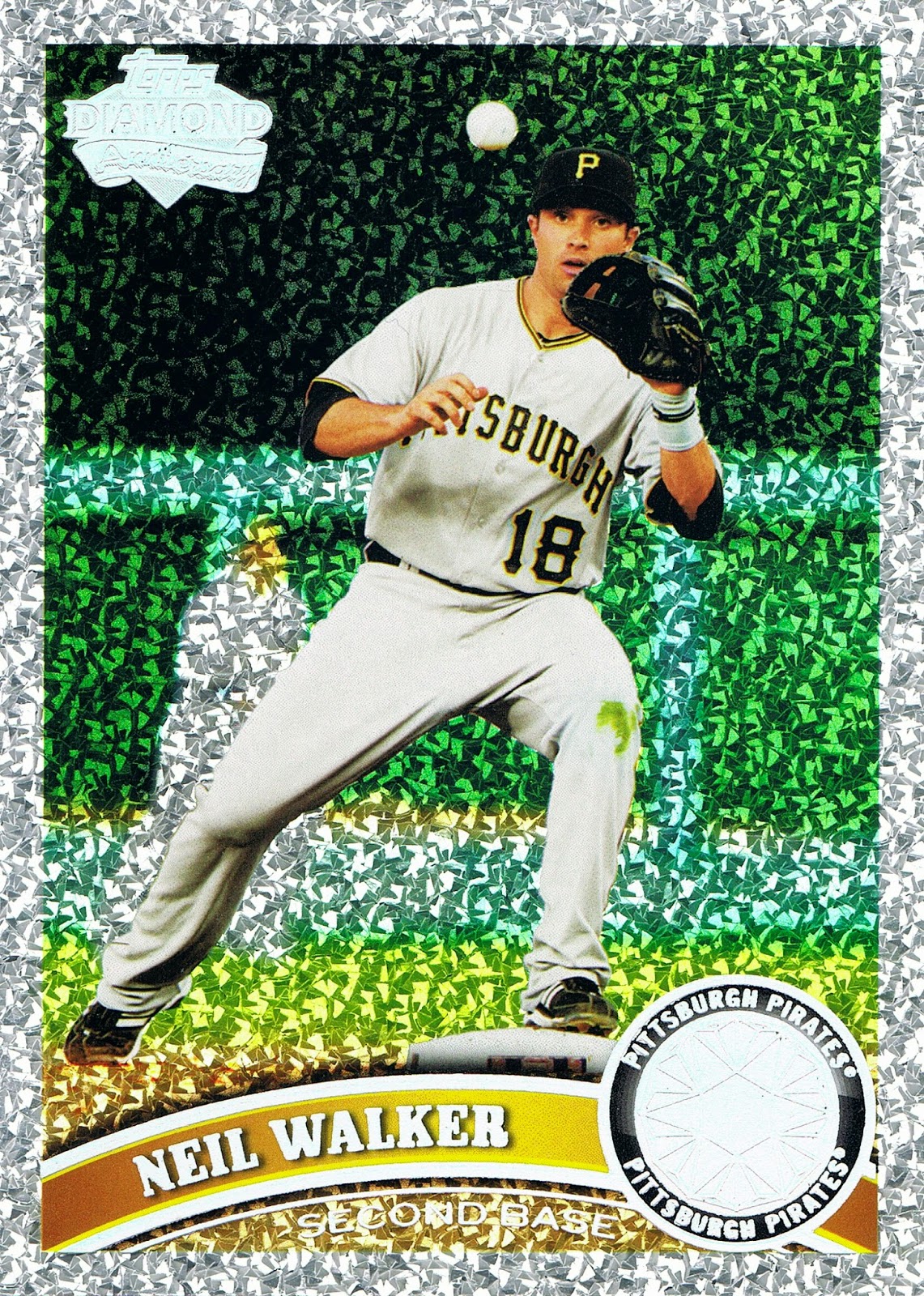 Though I must admit that lurking Pirate center fielder is pretty much completely amorphous on the regular issue base card as well.

Other times, Scotty can't seem to lock onto just one baseball player amongst all the oh, the humanity on a baseball card, and their baseball kidnapping victim has to stay in another mundane baseball game watched by the Topps photographer: 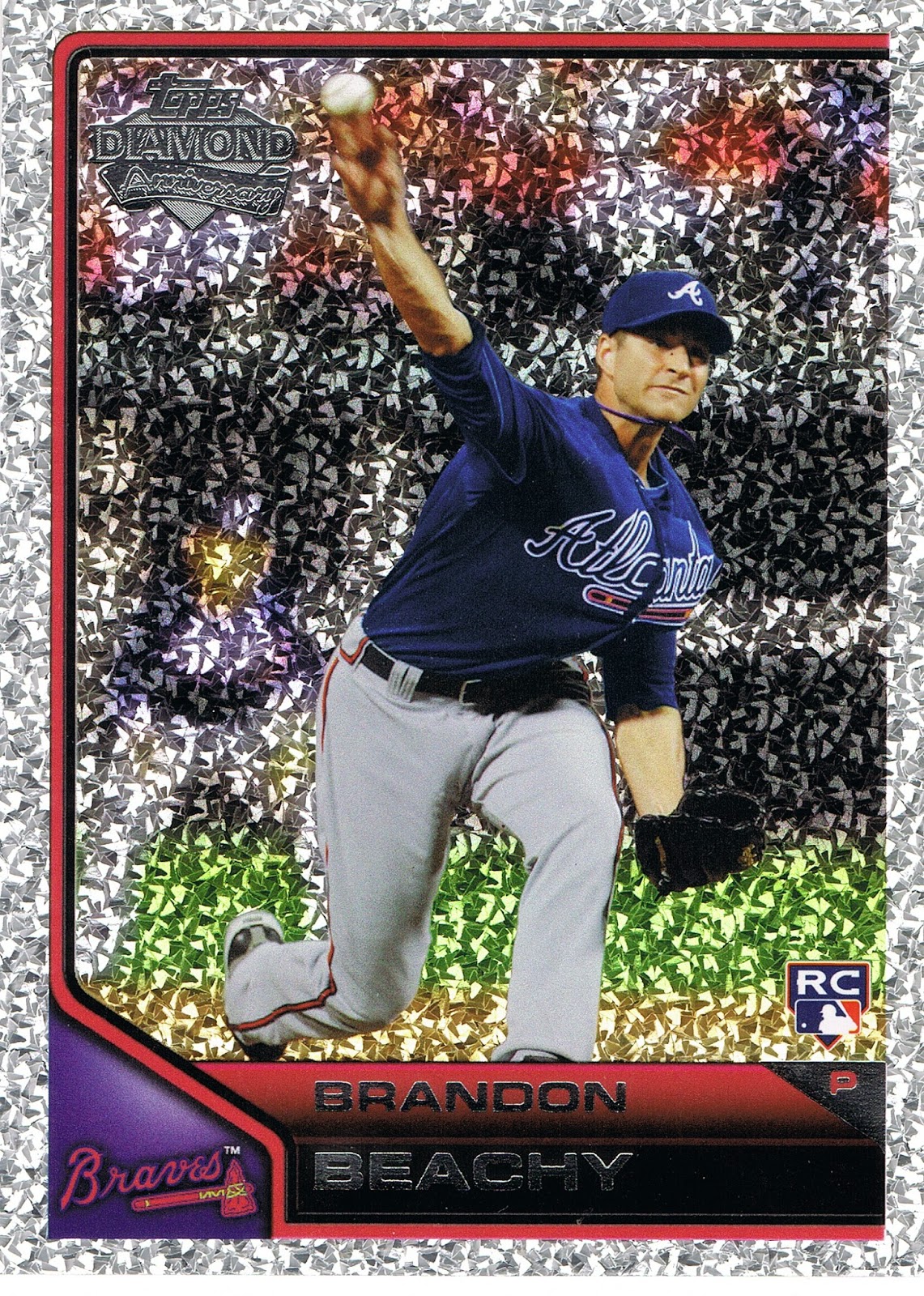 And then still other times, no matter how much Spock re-modulates the tri-corder or Jeordi re-configures the deflector array (writing a Star Trek episode must be the easiest thing ever - when the characters get painted into a plot corner, you can just make up new technology to solve their problems), they absolutely can not seem to even detect an Umpire, who I guess have pretty much always seemed to be fairly impervious to modern technology: 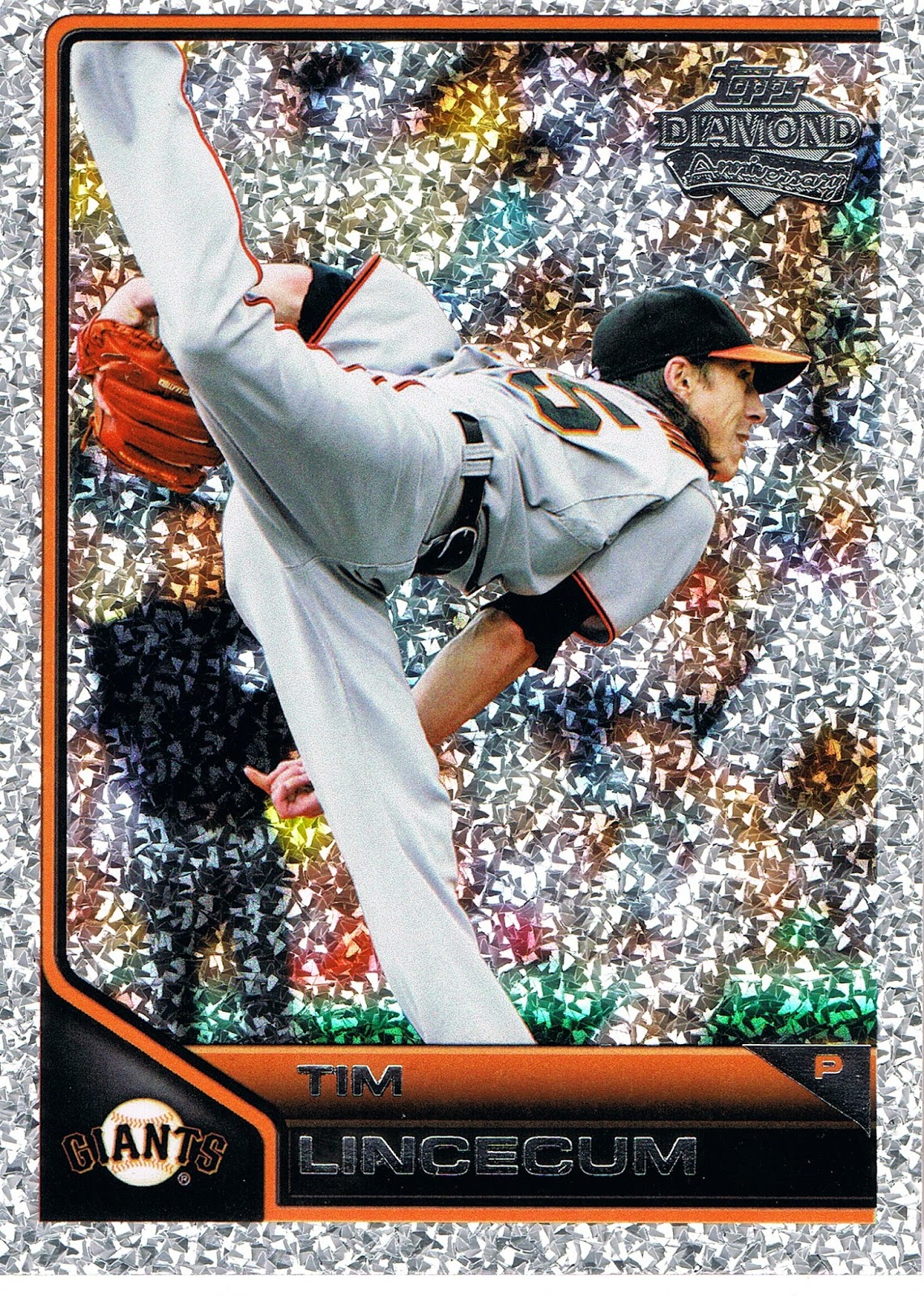 Maybe after this season and the success of instant re-play, they should try again.

Now I must confess I have been a bad blogger and I haven't even perused my ever increasing stacks of these cards for the best examples of these. Which has many reasons - my collection of recent cards that I actually have access to as I type, is in an extreme state of disarray as I prepare it for hibernation again in the coming off-season, and I select cards to finally beam-up to COMC and make all that ripping the last several years be a little more worthwhile. And thus I will soon have some more trade list pages for you to peruse over there to your right. So I did happen to have all my Lineage inserts and parallels sitting around when the wonderful Mark Reynolds Beam-Up card showed up recently. Err, the David Eck .. no, screw it. Hands down, the best Mark Reynolds card evah.

And I have had all this fun tonight with just a baker's dozen of these diamonds at hand, while declining to share a totally faaaaahbulous example of a Diamond Tatooine Card, because that would be the wrong parallel universe for this post, and I'm saving that up for a possible homage to a Legend of Cardboard.

Imagine what I could do with hundreds of these things sitting around. Oh yes, I can imagine that….

Sometimes, these cards don't make me wander off into my relatively minor affair with sci-fi make believe. I've never actually watched all the episodes of Star Trek (I heard that gasp from the hardcore Trekkies that wandered in here at random). I did that on purpose as I watched friends obsess over the whole deal, so I could always enjoy the idea of catching an episode I've never seen before, knowing this TV show would be "on" the entire rest of my life. And now more than ever I suppose, when I could summon the complete checklist of episodes with just a few clicks on the track-pad and check off all the missing boxes whenever I wish.

So please don't think I will be wandering off into the many worlds of cards with aliens on them (though I do pull the very best ones from some of the stacks I do have), nor will I be getting into ordering up printed Customs like this one: 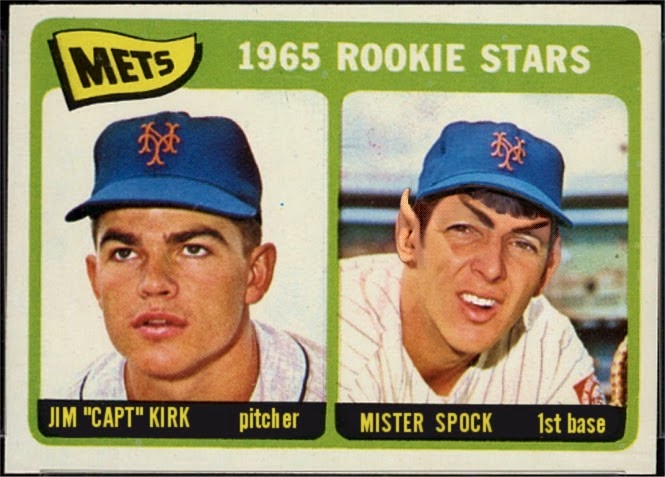 With that one, I am content to enjoy a cribbed digital version from this neat-O blog: http://metsfantasycards.blogspot.com

These Diamond Anniversay cards don't always whisper "sci-fi" to me because sometimes, they are  straight-up magnificent baseball cards: 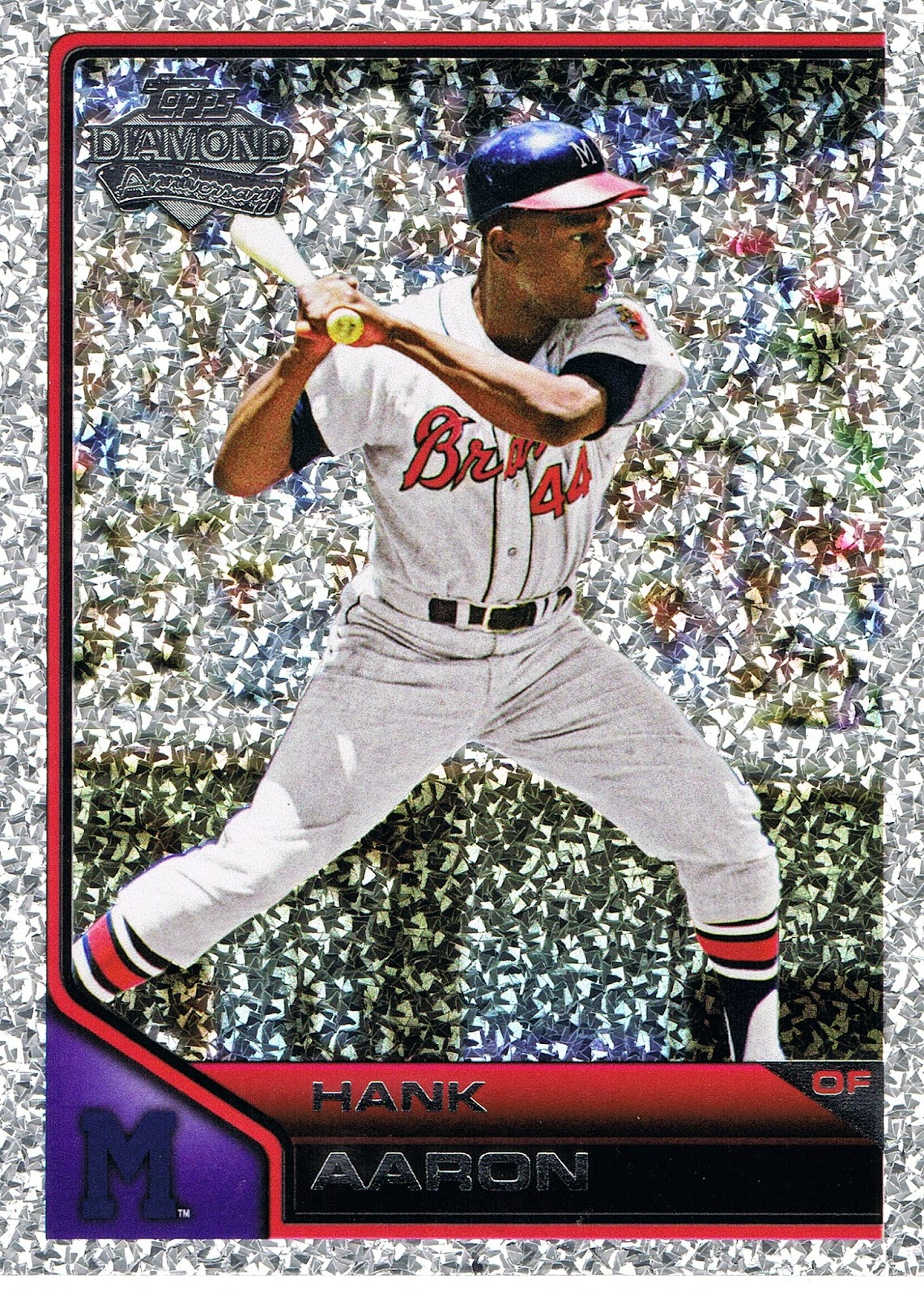 And this from a collector who's just not that into Chrome, or Rainbows (despite building a Rainbow Set, go figure) or especially anything Bowman, where this kind of stuff is all the rave,  though I know I probably I like these because I like actual Rave accessories quite a bit. Sometimes Ooohhh, Shiny + Hall of Fame just simply works.

As I sort my acquisitions of the last several years I have reached one conclusion about these chimerical diamonds of relaxation, and that is: I'm keeping all the ones I have. I had thought I could make a wicked cool looking binder page of the very best ones. Then I thought what the hey, I could make a couple three of those pages. I mean, with 2011 Series 1, Series 2, Update, and Lineage, I would have 1,190 of these to pick from. But soon I realized what would be coming….something to do with that COMC credit left over the glorious day I finish the Rainbow Sea Turtle project. A way to help all my fellow bloggers who have their own little stacks of these, quietly curling their way towards making the stack fall over, who could instead send them to me for safe-keeping, and proper straightness training bound up properly, in an Ultra-Pro Platinum binder page.

Yes, there have been a few things I have found useful in life I learned watching Star Trek. Such as this one:

Collect Long, and Complete
Posted by BaseSetCalling at 1:51 AM
Email ThisBlogThis!Share to TwitterShare to FacebookShare to Pinterest
Labels: 11 Series 1, Beam Me Up Scotty, Lineage, Lurker, Parallel Problem, Psychedelic