A Tale of 2 Card Backs

It was the best of times - the team had arguably the best outfield in the National League.

It was the worst of times - the team had lost it's young, cost-controlled #1 Ace in a tragic accident, spiraling it into a season of despair.

It was the age of wisdom - a reviled owner agreed to sell the team to a group fronted by a future 1st ballot Hall of Famer.

It was the age of foolishness - the decision was made by the Hall of Famer to trade away every piece of that incredible outfield.

It was the epoch of belief - Milwaukee felt it had some players on its way to a spring of hope.

It was the epoch of incredulity - Miami fans had no belief left.

Milwaukee would move on to a season of Light while Miami would remain in the Darkness.

The baseball fans could do little but wonder over the superlative degree of comparison, which arrived soon enough, with their brand new baseball cards.

They were soon cooing over the numbers found on this card: 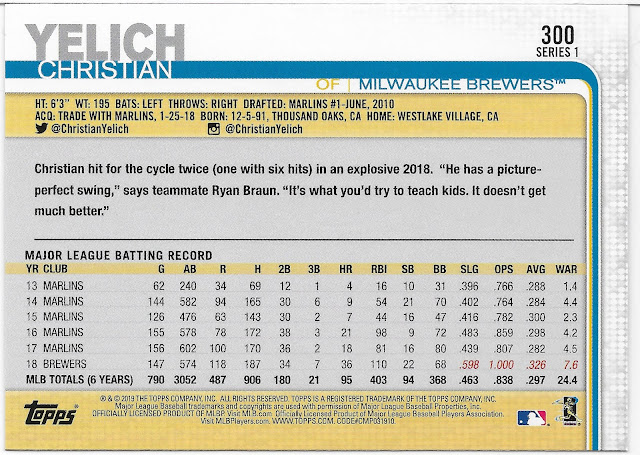 Rarely had a more impressive set of league leading red stats ever begraced the back of a baseball card in such pleasing OCD simplicity, which helped greatly after the OCD triggered when an explanation that the Italics equated to a League Leader was left off the card, though most baseball card readers were more than well-trained in the nuances of the genre to understand.

Few had even bothered to turn over a card found just a few cards before, in their nascent stacks of the brand new baseball cards. Despite the front of the card's evocation of another player famous for wearing only one orange sleeve in the famous city of Miami.

The cards had one eery similarity - identical "vitals" of 6'3", 195#. A striking coincidence, perhaps, two players of identical size - two players, destined to be linked throughout eternity itself, as if one's success had depended on the sacrifice of the other.

One small fact that could, perhaps, become the core of a brand new explanation of the future of the player with the one orange sleeve? Something that could help, somehow, adorn the back of a card with stats like these: 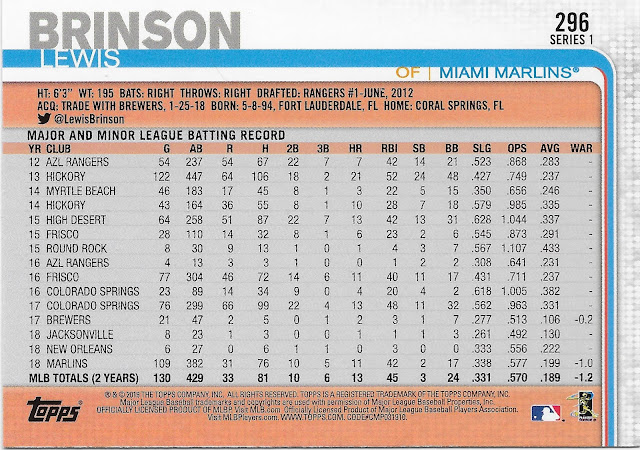 "Nah boss, I'm still stuck on trying to figure out something for that Brinson card. I got bupkis here; it's just, like, totally impossible! How about we just go back to printing full stats and call it good?"
Posted by BaseSetCalling at 8:25 PM
Email ThisBlogThis!Share to TwitterShare to FacebookShare to Pinterest
Labels: 19 Series 1, Yeah I Read The Backs