So the other day I was happily ripping some 2017 Series Two. Why was I ripping packs of 1.5 year old baseball cards? Too much time away from home, sigh.

It was a very enjoyable rip; it is fairly rare that I feel like I have sufficient financial liquidity to splurge on an actual Hobby Box of baseball cards, but I did that summer. Then I probably promptly disappeared back into living and working in a county without any stoplights. I like those, although they don't usually have baseball cards. Maybe this year I will luck into being in and around such country but still be within striking distance of a Walgreens, we'll see...

I did set aside some fun cards to share with you. But I also found a card that ties in with a subject I have written about a few times on this blog, including just recently: what is going on with the Umpires on the baseball cards? 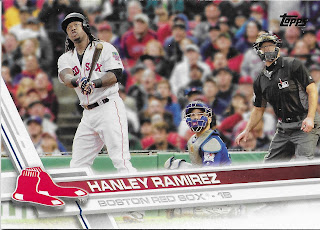 This is a fun card all the way around. I hear it saying "Everybody Watch Now" before a music bed kicks off where other people hear "Everybody Dance Now." I vaguely remembered it from 2017 Opening Day, but when Opening Day is appearing in my grocery bags, I am generally working all 8 days a week, till dark:30, usually.

That post in turn helpfully lead to an even more revealing post on Night Owl's blog, a full decade ago. I definitely recommend checking out that one.

Now you have probably noticed the feature I noticed on this nice Hanley Ramirez card. I have been looking forward to scanning it - Topps can't hide much from a high resolution digital scanner. First, I wanted to see the Catcher: 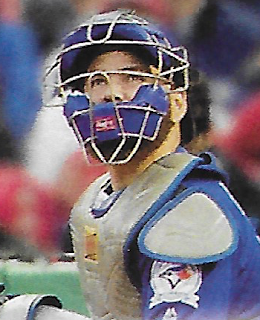 Though I thought a scanner could figure it out, that is either Russell Martin, or Josh Thole, I can't conclude a positive ID here. But I can confirm it is a regular human being baseball player.

Here is the Umpire standing next to him: 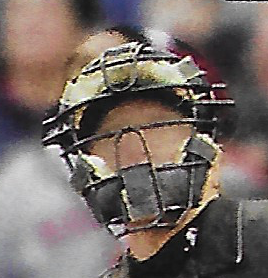 Have you always thought certain Umpires were so terrible as to be not quite human? Maybe here is your proof, complete with a poorly done paste of the original image now with a bonus not-matching halo, though that is difficult to discern, in-hand. Until you see it, and then you can't un-see it.

This card does definitively answer something I was trying to figure out on a 2018 Update card just recently - was the Umpire deliberately blurred when Topps created the card? Ironically, on the card in that post, I couldn't decide for sure - but I could still figure out which actual Umpire it was, even before I just asked Getty Images to spill the beans for me.

Doing that for this card quickly leads to this image:

Posted by BaseSetCalling at 12:56 AM
Email ThisBlogThis!Share to TwitterShare to FacebookShare to Pinterest
Labels: Umpire