While you await your irregularly scheduled Topps products

Please enjoy these other Topps products. 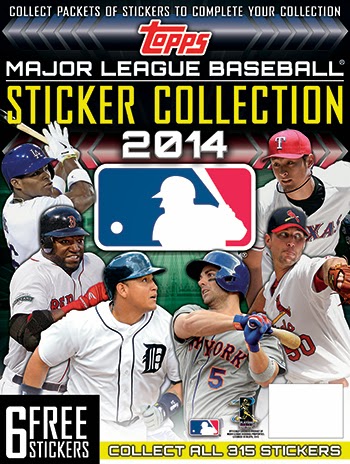 I have been waiting patiently to dive in to Heritage this year. I want to mostly purchase blister packs from Target, for those cool black parallels only available inside. Topps sure knows how to push my buttons, I must admit.

But Excell, the subcontractor for Topps over Tar-jhey way (a fine French store, oui?), is pretty slack sometimes. So I have been in Target admiring the fine scenery several times the last couple weeks, awaiting Christmas morning, errr, the arrival of some 2014 Heritage.

Instead I ended up with this year's stickers. Which sated my jones at least a little. Lately I hear Opening Day has hit the shelves. Except of course, at the Target I have been driving by of late (and today's Wal•Mart for that matter).

And also except I haven't always been driving much. What better excuse not to blog than … my truck was hit by lightning. Yep, while I should be on my way north to suave life in hotels for a few nights, I am instead still stuck in a mostly internet-less condition for several more days. Except when I borrow my friend's car and park down the street by the hotel, so I can hang with yous guys at least a little bit, and forget about the hopeless task of trying to source a used PCM for a 2000 F250 7.3L for a little while.

And I also must admit I did finally get into some Heritage, courtesy of my #1 winter-time Friendly Local Card Shop. But my scanner, baseball cards, laptop, and brain are having difficulty all arriving at the same location in the evening, thanks to that lightning strike.

Luckily for you I did scan in some of my new stickers. Let's take a look. 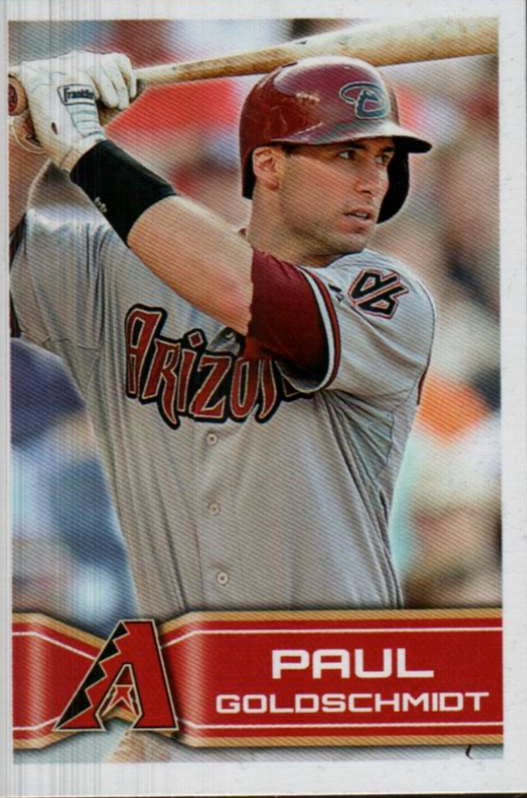 Now, I frequently whine about Topps' fetish of late for cropping their images to a never-ending series of torso shots. Which would make an astute reader wonder just why in the heck I would want to fool with Heritage, a set in which for the mid-60s styles, a torso shot is like pure Action Jackson compared to all the straight-up head shots. I think I'll answer my complaint on that soon, when I can wander you through what I have found so far in Heritage.

In the sticker set, Topps has every reason to use simple torsos only. It's not like they have the full regulation 2.5" x 3.5" to work with after all. So torsos can be just fine on these stickers, which are of course, supposed to be for children. Right?

In the end, it all depends on the photo the Topps editor selects. Some somehow really do work well: 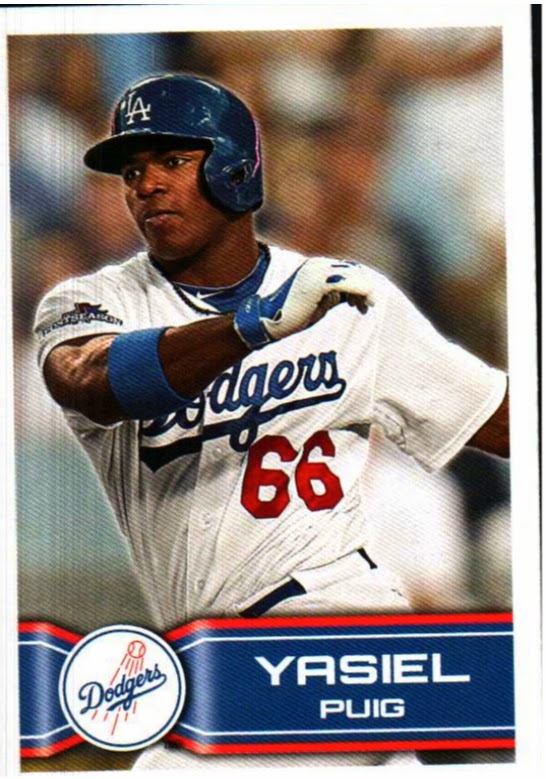 Such a nice sense of motion on that one. And he doesn't even look fat yet either.

And upon further review, i.e. editing my boo-boos after I post the first time, I discover this mystery image: 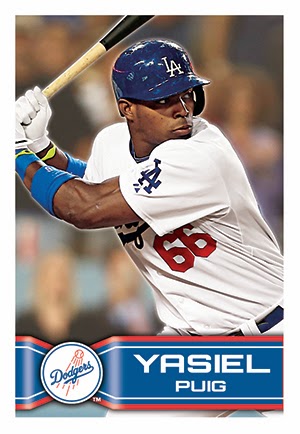 WHAT's THIS!?! Topps you fiendish Fiend. A sticker short-print. Of course my immediate first thought is - hey, maybe I pulled a Puig short-print and the rest of you kids will get this one I just downloaded from Cardboard Connection. Or maybe that second one is a pre-release mock-up that didn't make it off the drawing board (or out the Back Door in an employee's pocket, hmm?). Don't worry, Base Set will be on the case. Eventually. Work base is still pretty intense right now.

Anyhow, generally the non-pitchers are shown at the plate; I'm thinking fielding shots might be a little more rare this year, though they do exist: 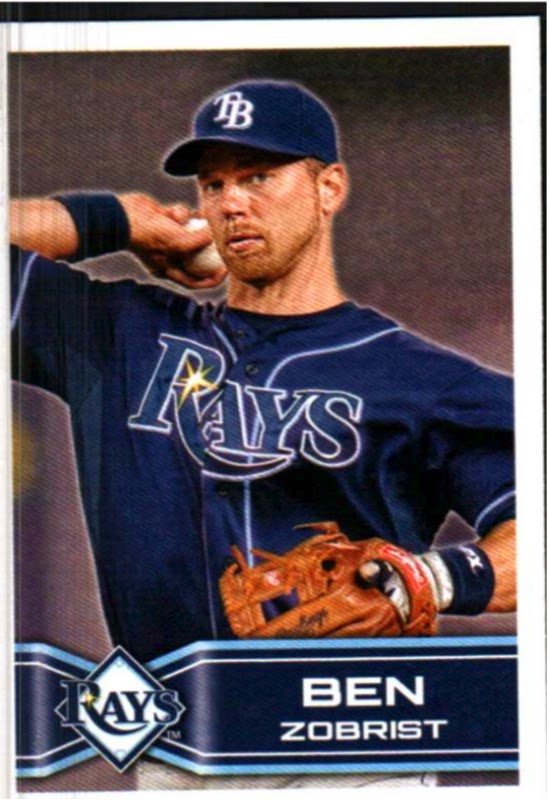 Perhaps these are rare because the usual subjects of fielding shots in baseball player image products are the more light-hitting players, and what kid wants a sticker of players from the bottom of the line-up? But then Zobrist did sort-of make the All-Star game last year, so he has to have a sticker this year.

Pitchers can get just as repetitive as hitters when it comes to torso views. But even with pitchers (who don't often make the sticker set), gems can still be found: 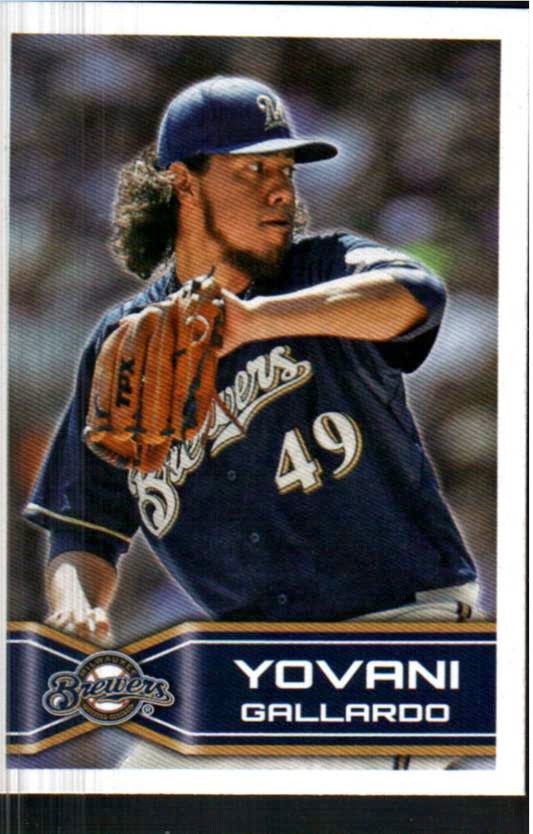 Topps seems to like Yovani, or he has very good luck when a photographer is pointing a camera at him. He had a sweet, to-be-featured-here-eventually card in Series 1 last year, and also one of my favorite stickers in 2013 - it made it into my permanent collection, stuck right to the cover of a binder of baseball cards.

Of course the sticker set includes at least one All-Time Great for each team, and they frequently come off well, as well: 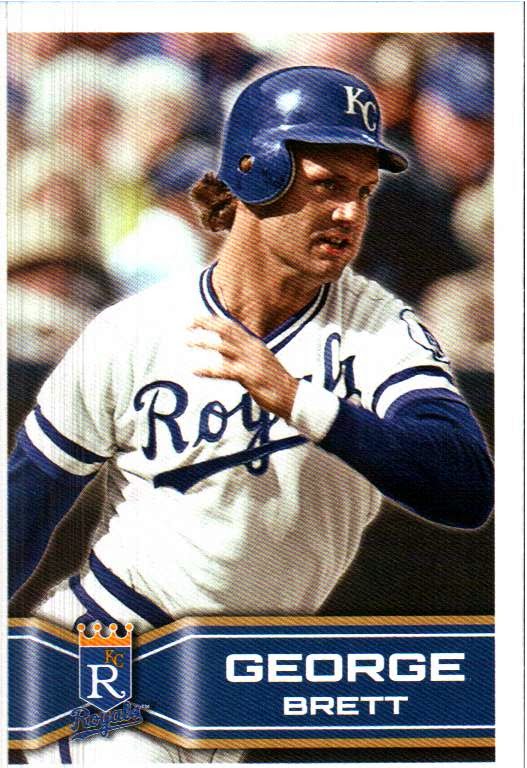 That one has just a hint of this somewhat frightening sticky image of another All-Timer: 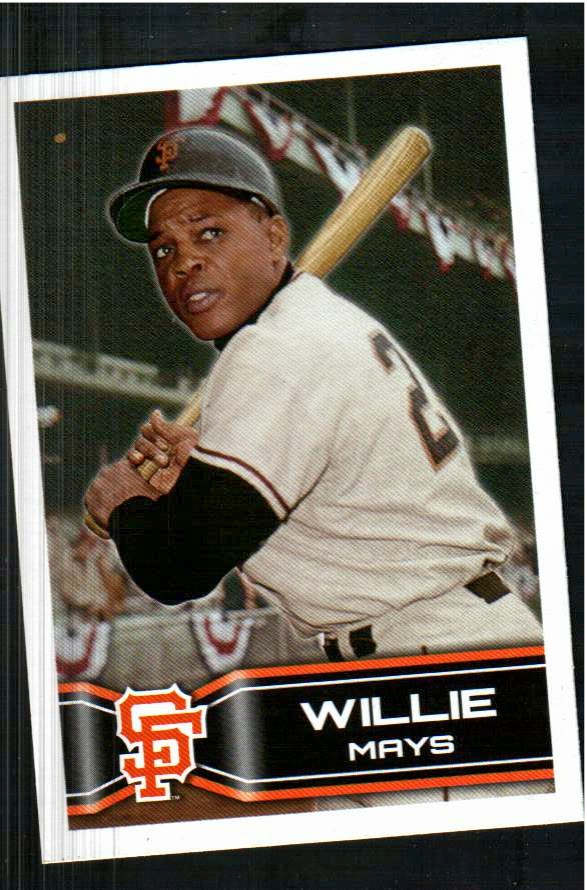 Be afraid, Willie, be very afraid. I'm not sure just what the high-end photo software at Topps HQ is up to either. I think I'll be saving this scan for some more photo critique later.

And at this point I must apologize for the so-so scans I'm presenting. My Neat-O mobile scanner isn't really worthy of such Topps masterpieces as this one: 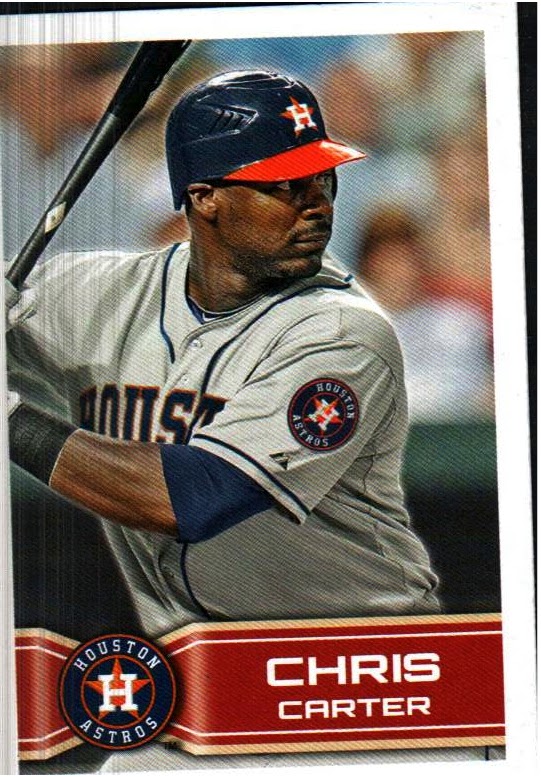 A photo Topps likes so much they've already used it twice. Is there a statue of limitations, err, legal limit,  for these? Though Chris has a long way to go to catch Ted Williams in this department, among others.

The sticker set also wouldn't be the kid-centric set it is supposed to be without the mascots. Topps added an odd wrinkle to them this year, up there in the right corner: 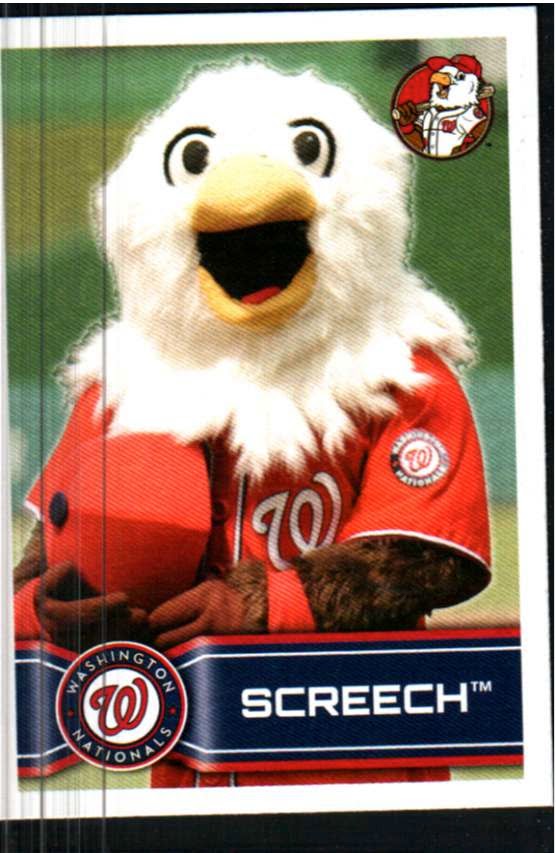 That odd bit of illustrated-mascot-logo-thingie has pushed a button once again as now I absolutely must find out what Paws looks like in a small drawing, for some reason I'm thinking only my readers here might possibly know, because I sure don't.

I even got a kick out of my first Photoshop score of 2014: 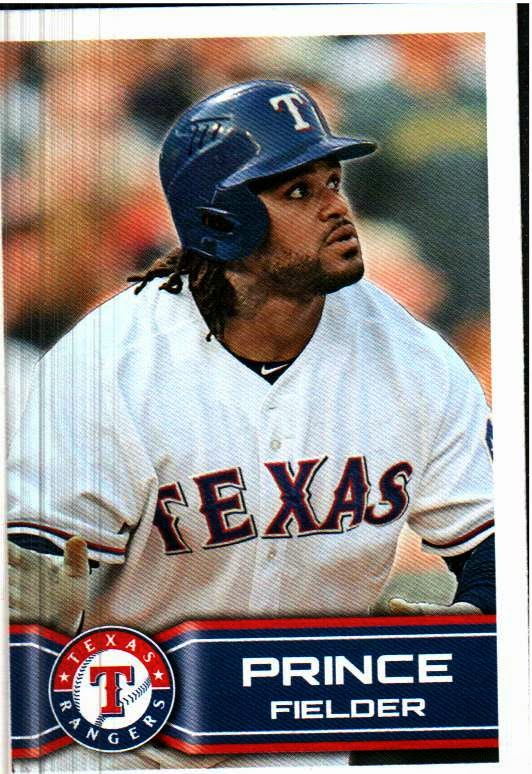 I just love this one. It makes me laugh. When I look at it, I can't help but sing this song in my head -

So I have to give out mad props to a 15¢ product that makes me pleasantly jumble up lyrics to a pleasantly jumbled-up classic song. And I do look forward to picking up some more of these, because who knows what song they might make me sing next, and because I am ALWAYS on the hunt for this one, which Topps absolutely positively should repeat every single year:

Because, you know, I like to get the lower half of that one … and stick it on things.
Posted by BaseSetCalling at 10:35 PM
Email ThisBlogThis!Share to TwitterShare to FacebookShare to Pinterest
Labels: Topps Stickers