There are Umpires at the baseball game?

Because I just don't see them on my baseball cards much any more.

I received this card recently; not in trade, but as a bit of packaging protection in a shipment from an eBay seller. The fate of early 1990s baseball cards... 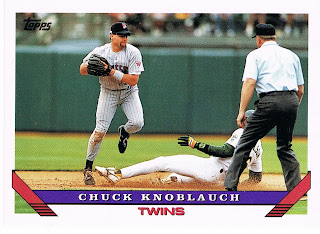 A nice, basic, horizontal baseball card. A Turning Two card, most likely selected out into many collections of such cards.

But what immediately jumped to my attention is the Umpire there. You just don't see many cards like these. We still receive brand new Turning Two cards from Topps, but the Ump is so often edited completely out of the picture.

Now I'm not suggesting Umpires should be on baseball cards. They shouldn't, generally. Baseball picture cards are supposed to feature the players, and oh how well they do now. I just prefer baseball cards that depict the game of baseball, rather than make fetish objects out of the players. Baseball card collectors are always saddened by the size of "The Hobby" today, and wonder why more people aren't interested in it. I'm beginning to think the steady banishment of baseball pictures in favor of the ego-gratifying celebrity-worshipping products that baseball cards generally are today, is one, albeit small, part of the reason.

When I started pondering this toppic the other day I knew I should compare my old-fart complaints about those kids today to cards of years past. But I don't really have the collection for that, with my wonderful 70s/80s cards in a secure remote undisclosed location for the time being, and only large portions of 1991 and 2001 Topps sets to check out. 2001 proved to have a whole lot of live action photos, but no Umps; the images were all sensibly cropped down to a single baseball player, as they should be. You do usually get to see their feet however, which allows in more glimpses of that game context I crave. And again, the cards should be about the players, not the Umpires.

I knew 1991 likely held few of the action shots I seek. That led me to the set that brought me back into everyday collecting, the 2011 set. I fondly recall some Umpires on a 2011 insert set, the Kimball Champion minis: 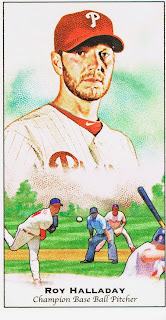 I like those little cards, where it looks like the Major Leaguers are playing on some small town ball diamond with a forest in the background, but am only saving 2 binder pages of 15 each, rather than collecting all 150 of them. I am down to 8 entries on my want list and have about 50 left over, which I would like to find a good home for. They're not worth sending to COMC.

Now the 2011 set has standard cropping very similar to the 2001 set, but far more horizontal cards, and those are usually dramatic entries in the set. It didn't take long to find one: 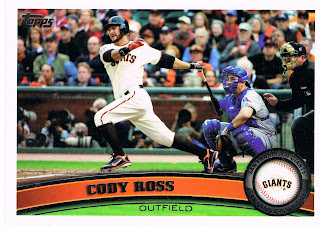 A complete slice of baseball action there. I always like cards that capture the press pit there in the background for some reason, though they make me wonder who Topps hires to get such shots, as they obviously aren't over there with the rest of the media.

But let's see what happens when we apply the 2013 zoom style to a similar card I know you all probably remember from Series One this year: 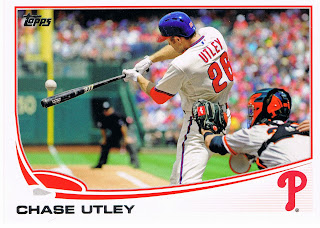 Now the Umpire is just a lurker? No, though even lurking umpires are few and far between on the backs of the Sea Turtles. They can be found on the Ben Zobrist I-just-murdered-the-catcher card, and the spectacular Pedro Alvarez card.

There on the Utley card, the Home Plate Umpire is still present, with just his fingers on Buster Posey's back there, which I found quite touching. Ouch. The Utley card is still a pretty good card, but despite all my bitching about the zooming in to the all torsos, all the cards this year, I have never liked cards that don't show a player's face, no matter how spectacular the game action we receive in exchange. It just seems disrespectful, to me.

But that's about it for Umpire Action in Series 1 & 2. A couple blurry lurkers, and one headless umpire that I was very grateful to have on a card, as I used his uniform # to determine the results of the bunt on the wonderful Erick Aybar card. 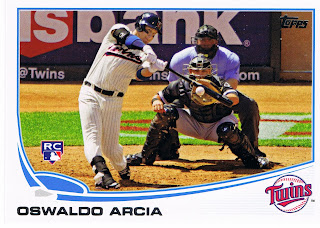 Now to me, that is already a great baseball card. Arcia is still a promising young Major Leaguer, but if he hits 30 Home Runs next season collectors these days will be scrambling for all his shiny photo-shopped serial #d relic autograph cards....every card but this one.

I'm not sure how Topps gets these photos. Maybe all that digital / optical zoom technology they overuse now has it's advantages I guess; perhaps these are even stills from the video feed of the standard baseball-on-TV vantage point. I have never fully understood that view; I have always wanted to watch a game from the Umpire's vantage point. I sat 7 rows directly behind Home Plate at Comerica Park once, watching each pitch come right at me, and I've had a bit less desire to go back to a baseball game ever since; unless I could return to that simply awesome vista of baseball, which is how the game should be seen.

However these photos arrive in my packs of baseball cards, Topps certainly deployed it to good effect on the live-action All-Star cards this year: 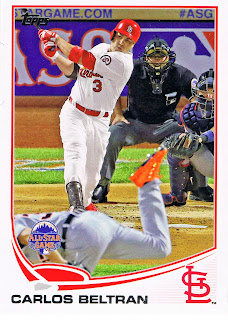 There are several of these shots used for the All-Star cards, and I have already featured another great one. Whatever the technology at play, it's only a tad better than the TV cameras at handling Max Scherzer's max out the tint orange shoes there. Is this his hint that he hopes to play in Baltimore in 2015?

Topps does get their photo equipment dialed in to deal with more great orange shoes on an actual Oriole player, Adam Jones: 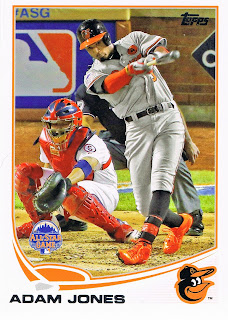 Though here we are back to an obscured Umpire, I added this tonight because I certainly flubbed not including this one last night ... where else are you going to find two memorial patches for two baseball legends, Stan Musial and Earl Weaver, on the same card but on an All-Star card. (The O's Weaver patch is moved to the left breast to accommodate the All-Star Game shoulder patch). I love the lines on this card created by the MLB logo, the umpire's torso, and the space betweem Molina and Jones. They lead you right to those wonderful shoes. Though lines trending down aren't good for baseball cards, they work out just fine here.

A few more of those cards shot from the same point are used for the All-Star cards in Update, and I am just fine with that, as these make for excellent baseball cards. Overall the Arcia card is probably my favorite Umpire Card this year, at least among the base cards.

But my actual favorite baseball picture cards including an Umpire appeared in an insert set in Opening Day this year: 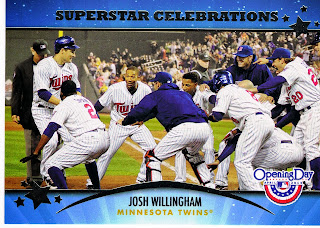 The game is over, for everyone but the Umpire, lurking there to make sure Willingham steps on the plate after his Walk-Off. I'm not the greatest fan of these cards, or seeing this at a regular season game, though I guess some teams need to celebrate when they can.

Another card in those inserts actually is a home run though, for many reasons. A copy of it will probably make my Airborne binder pages, for one, and even though the card features the vast majority of the Washington Nationals - perhaps these are better than staid team checklist cards - I can't seem to find Bryce Harper anywhere on it, amazingly enough, though I have no plans to look too closely: 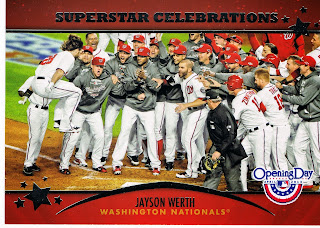 Now I had hoped to deploy my own digital technology to figure out which Umpire this is and give him some props here, by zooming in on the scanner results, but that didn't work out. Just not enough pixels available, I think.

Whichever Ump it is, I love this shot of the Umpire, an integral part of every Major League Baseball game, all the way to the end. Whether Topps ever notices them or not.
Posted by BaseSetCalling at 12:04 AM
Email ThisBlogThis!Share to TwitterShare to FacebookShare to Pinterest
Labels: 11 Series 2, 13 Series 1, 13 Update, Baseball on the TV, Lurker, This Card Is Watching Me, Umpire