Though this blog has enabled me to launch my first baseball card trades of the 21st Century, I have had real baseball player trades on my mind lately. I'll have a question on card trades in a bit.

So I have been listening to the Tigers Spring Training games some and the big question is whether their rookie Bruce Rondon can become their closer for 2013. I did miss today's broadcast with Rondon's turn to pitch unfortunately. He did well this time, with a couple strikeouts I think.

But it remains to be seen if he will be The Closer on the 25 man roster on April 1. Has there been a baseball card listing a player's position as "Closer" yet? There are DH cards, how about Closer cards? Maybe the first one made could make a nice tribute to Mariano Rivera.

Will there be another Closer in his 40s? It seems to be trending the other way...how long till a teenager strides to the mound in the 9th to strike out Bryce Harper?

But if Rondon doesn't work out for this year, the Tigers will have to make a trade. I would sure hate to be a GM needing to fill holes on a club this time of year. Cough, cough, Brian Cashman, cough cough. They'd better hope the players at Scranton were good last year....

One potential for the Tigers if they trade for a closer would be the player on the card above, by random chance the blue parallel version of his 2012 Topps Update (this card was on the top of the box I opened to retrieve him). It's almost surprising Miami could consider trading away anything else at this point, but perhaps so.

Topps came through for me with that card. I had never heard of this player, but the back of his card backed up my favorite radio announcers on their thinking: 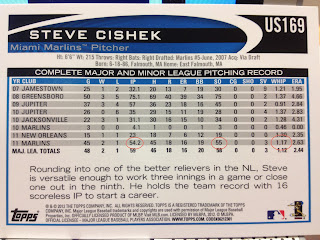 Now I don't know much about the Marlins bullpen and the depth of it and what they hold on the farm, etc., but baseball cards sure helped me follow what Dan and Jim were saying about this player. He looks like good potential closer material to me. Maybe the Marlins need a young starter or a young outfielder, we'll see.

But what about trading baseball cards? My question is do you blogger reader types ever pull off 3 way trades. Such as the blockbuster a few years back that sent Granderson to the Yankees, Kennedy to the Diamondbacks and Scherzer & Jackson to the Tigers.

Let's say I finally get around to putting up a Trade Bait post of 2 Carlos Gonzales goodies I picked up this spring - his '13 Heritage Short-Print and his Silver Slugger "manu-relic" (one heck of a strange English construction there). A Rockies collector sees that and knows I want one of the Miguel Cabrera Triple Crown die-cut autos that are a redemption item from Topps this year. The CarGo PC guy knows someone else who has it, and has something that third General Collector wants. Voila!

Does this ever happen? Just curious.

And droopy eyelids make me all warm and fuzzy thinking about the Yankees having to play people under 30 this year. Good night.
Posted by BaseSetCalling at 2:18 AM
Email ThisBlogThis!Share to TwitterShare to FacebookShare to Pinterest
Labels: Dan and Jim, Great Sox, Spring Training, Trades