I probably wouldn't be writing this blog if it wasn't for a card shop. The owner didn't point me towards blogging or anything like that; the owner has simply kept his shop open long enough for me to visit enough times to start collecting baseball cards again, simple as that. 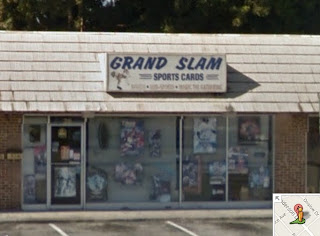 I have worked in eastern North Carolina for the past 21 winters. Very busy work, with 80+ hour weeks not uncommon. But sometimes, it rains....and I can spend a little time shopping.

One fine rain day probably in 2001, I noticed this store. I bought a few packs of cards. I went back.

I ended up collecting the Topps Base Set, Heritage, Stadium Club, and Topps HD that year as a result; those last two at the recommendation of the owner based on hanging out talking cards, chosen from the blurry array of sets still on the market back then. I finished none of those sets and forgot about baseball cards the next year for some reason. Probably spent too much time too far from Jacksonville. Unless it rains, I usually can't get into your average retail store during average business hours.

I did return to cards at an extremely low level in 2003, when the Tigers attempted to not break the record for losses in a season. They succeeded in that by losing only 119 games. I was intrigued by rock bottom I guess, listened to a ton of games on the radio and bought an olde English-D hat that year, so it would be perfectly broken in when the Tigers returned to the World Series and everyone had a shiny new hat to ride on the bandwagon with. That worked to perfection in October, 2006.

However I didn't return to owning enough cards to stack them up in a stack until 2011. Probably a quick visit with Paul, the super-nice owner of Grand Slam Sports Cards, for that year's sample pack, brought me back somehow.

This year was the same. I disagreed with 2012's sample pack in mid-winter at Grand Slam (story coming soon, I promise), but for some reason bought a pack of '12 Update late last year at a Big Box. That led to a few more packs, and a visit to Grand Slam just before Series One came out. Talking it over with Paul, I asked for a Hobby Box upon release. I had a hunger for baseball knowledge I wanted to retrieve from the backs of baseball cards, not from some website. Paul had my hook-up.

So I will occasionally post some details of all the card shops I visit. Maybe when you travel, you can visit one. Maybe an idea one shop is trying, could help your local shop. Maybe you are reading this while working at a card shop. Maybe you will amble down to your Friendly Local Card Shop, I'm sure they'd like to see you. Here we go...

Collecting Supplies - Plentiful, and quality. Ultra•Pro Platinums easily available, everything else you could need.

Space to rip your purchases - I feel this is a key element of a shop. Paul has a counter with barstools for customers to hang out at while they check out their new purchases.

Baseball Cards : Other Cards - 60:40 perhaps on the sports. Basketball is big in NC. Hockey is not. NASCAR is from North Carolina, but the cards didn't hang on here any better than Hockey.

21st Century Survival Strategy - Magic: The Gathering, Yu-Gi-Oh, etc. Half of the store is dedicated to gaming cards. Perhaps more than half, in that Grand Slam hosts a weekly tournament, with plenty of spacious tables and a soda machine.

Cool Customer Service - A good portion of Paul's customers are Marines stationed at nearby Camp Lejuene. Given the crazy wait times involved with redemption cards and the crazy life schedules for military personnel going on overseas deployments, Paul lets customers have their redemptions sent to his store, where he will hold them until the Service Member returns. He keeps a special rack for them behind the counter with a little box for each one, and notes of the details on card company, card expected, date mailed, etc. I thought this was a very nice touch for his customers, and even nice for his suppliers (the card companies) as well.

Memorable Quote - "You read the backs?"

Treasure Wistfully Not Obtained - The last time I was able to visit Grand Slam this year, a shoebox of cards had walked in the door a few hours earlier and I was allowed to hunt for treasures therein. I'm sure the hardest part of owning a shop is explaining to people all day long that the vast majority of the baseball cards they own are not worth anything. I saw this in action once at Grand Slam when a 20s something guy came in with a Babe Ruth baseball card. Babe Ruth! Paul led the customer through an eBay search from the terminal on the counter to show him it was worth about a dollar, having been manufactured in the 1990s. The deflation on guy-from-the-street was both audible and visible.

So anyhow such cards are frequently donated to Paul, and he donates them back to regular customers who want them. That last lot I saw shortly after arrival had a set of 1980s Topps Glossy All-Stars, a mail-in set that featured just Baseball Picture Cards. A picture of an All-Star, with his name in tiny type at the bottom. No design/graphics/etc. Clean. Tasteful. Baseball. I could have had them all....

Instead I picked up 3 1975 commons that I missed very, very, much. Then I went 'home' that night and discovered a truly Dy-No-Mite Blog. The rest is history.


Posted by BaseSetCalling at 2:14 AM
Email ThisBlogThis!Share to TwitterShare to FacebookShare to Pinterest
Labels: FLCS