Happy Canada Day! I'm even resisting adding a bonus vowel there, to show a little respect. Besides, I did that last night.

I always thought this card in my collection would be the card with the most Maple Leafs on it: 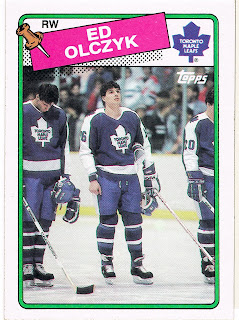 3.5 Maple Leaves, and 3 hockey players. That guy on the left there, somebody should poke him. You're supposed to look up, optimistically, when they are playing O, Canada on your home ice. But then if you played for the 1980s Maple Leafs, you'd look down at the ice a lot too.

I tried to find some vintage Maple Leaf cards to celebrate Canada Day with you, but I think my vintage vintage Hockey Cards are on safari with my terribly missed 1970s baseball cards. This was as good as it got in a box of Hockey Cards nearly amazingly Maple Leaf-less, but then it was an all-Topps box, mostly from the 80s. I'm sure O-Pee-Chee would have given me way more Leafs. I've always wondered if Canadian collectors chase Topps cards to complete their player collections: 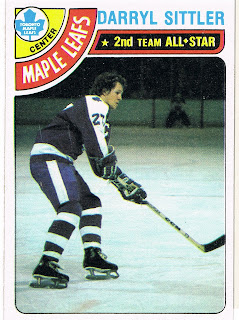 A '78-'79, old school no-helmet edition there. Who knew Hockey Cards had Night Cards too? Maybe the Leafs were saving a few bucks by only lighting the side of the arena with the puck in it. You just don't normally think of finding a goalie lurking in the shadows on a Hockey Card.

I was in Canada last year on Canada Day. It was wonderful. A few days later, while my hometown hardly wanted to even celebrate pre-USA Day in the baking 100+ heat, I got to watch these big puffy white things drift down from the sky while I was working. Yep, I could almost say I got to see it snow on the 4th of July. Missed it by a day. Still totally wonderful though. I'm no fan of the Heat.

I had received an awesome career educational opportunity from a nice contractor who let me work up there, illegal-alien style. This year, I could secure neither a work visa, or a job. To get a job, I need a work visa. To get a visa, I need a job. Those Canadians. On the obscure chance a real Canadian could help me get around this empty-net type problem, please get in touch. I had many other things on my brain ... like working on a tree-planting crew with more women than men. Oh, how different my life would have been in Canada. I would probably own 1000x more hockey cards than baseball cards, for example, rather than the reverse situation found in my current collection.

Now, I wish I had a sports card story for you from Canada, but, alas I do not. Actually, I forgot to even look for cards the one time I got to visit Canadian Tire (yes, I think there was a good chance cards were in there, even with the word "Tire" in the store name), but I do have one outstanding sports memorabilia (I really dislike that word) story.

When I reached Edmonton, on my way much further northwest deep into the Blue Canadian Rockies, I stopped at a book store for a little extra reading material out there in the bush. And when I opened the front door of the place, I was greeted by a life-sized piece of awesome cardboard that looked very similar to this image: 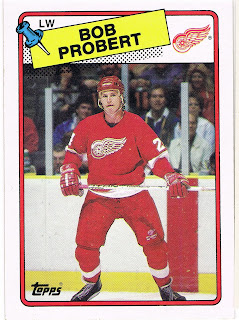 That's right, this bookstore was darn proud. We've got Bob Probert's book, bitches. In Edmonton. The city that hated Bob Probert, and the scene of one of his many fuck-ups one night before a playoff game for the finally somewhat successful mid-80s Detroit Red Wings. What an impressive sports fan country.

To my great regret (along with not staying in Alberta longer in the company of someone with huge tracts of land), I didn't buy that book on the spot as I had a long shopping list in my head already. I really need to fix this situation. So if you see a life-sized Bob Probert (RIP) cut-out anywhere....

But what about the Baseball Cards? That's what we signed up for. You can get almost anything you want with a maple flavored version in Canada - baked beans, breakfast cereal, donuts, even whiskey now (where else but Canada). In fact I think you can accurately judge how far north or south you are in North America by how many maple flavored products are for sale. Try finding one in a grocery store in Georgia. Good luck.

But the Maple Leafs don't play baseball, everyone knows that. So this year I have a new contestant for the most maple leaves on a card, on a Baseball Card: 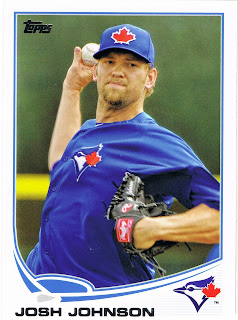 Don't ask me to 'splain it. Oh, OK, I will try. That is the point of a Baseball Card blog, isn't it? Even the Rajai Davis walk-off card doesn't have that many maple leaves on it, though it has a whole lot of players, but no Maple Leafs. Stay with me now.

That cap is a new cap this year for the Blue Jays. Technically, they wear it for batting practice, though I would wager it gets a pretty prominent display in the gift shop at the Rogers Centre. So it sure was nice of Topps to put it on a baseball card. I'm sure the Topps-always-sucks-all-the-time conspiracy forum posters would wonder what Topps got in return for publishing this card. I don't care, I just wish I had one, I would surely wear it today. Maybe it would get me a little better luck on getting one of those visas.

And of course technically, there are several cards in Series 1 that have three maple leaves depicted on them. Such as the final card in the Series, #331 Jose Reyes. Which is of course a horrible Photoshop crime against the sanctity of Baseball Cards. Hey, wait....if they Photoshopped (I love how the automatic spell checking these days accepts "photoshopped" as a real word) Jose Reyes, what about Josh up there....things are starting to look suspicious. What's Topps' cut on hat sales in Canada anyway?

But I don't think so, because we also have this card: 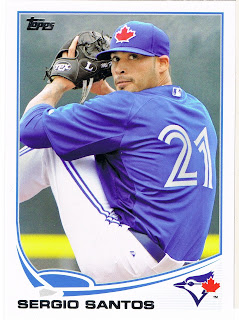 Sergio actually played for the Jays in 2012, so Topps would have no need to photoshop a card for him, particularly in Series 2. (If your favorite National League team is due to face the Jays at home after Santos returns from the DL, you might want to read the back of his card before you start puzzling out late-inning pinch hitting strategy. I can't give away all Baseball Card secrets.)

Anyhow, both cards have that same yellow line, probably the top of the short Spring Training ballfield fence. Like in this picture, taken in warm-ups for a Spring Training game at Dunedin: 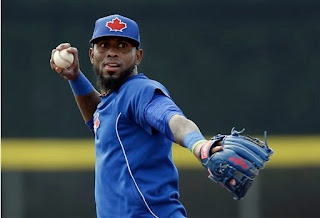 That would have made a nice maple leaf Baseball Card. He just hit a home run as I type, though he did it on the radio. I'm Blacked-Out of watching a free game on MLB.TV, even though I am 350 miles and one international border away from the likely sold-out Canada Day Jays-Tigers game. Brilliant.

So Topps appears to have taken pictures in 2013 Spring Training, and put them on 2013 Baseball Cards. Something I regularly wish for, and a sentiment I have seen obliquely on other blogs as well. Why can't Topps do some more of this? Would it have been so tough to just print a nice safe Jose Bautista card in Series 1, as he is signed through 2015, and issue an all-new-and-shiny Jose Reyes card in Series 2 instead? That wouldn't have changed the stars mix for either series. And no, I can't explain why Josh Johnson gets a card in Series 2 AND Series 1, rather than __________________ insert-your-favorite-player-you-must-now-wait-till-October-to-see-in-Update. 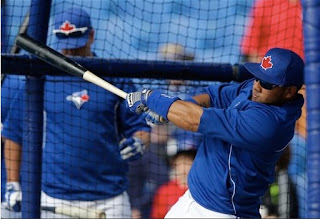 Especially since Melky's card didn't come out until Series 2. I wish I could remember who pointed out the other M. Cabrera's orange batting gloves on his new Series 2 card. Figures Melky would wear the abysmal flat-brim version of this new cap. Fits.

It's becoming clear to me this year, Topps just isn't a purist about those Baseball Cards.

Fortunately, it's Canada Day, and I hope you are having a happy one, even if you might have likely celebrated over the weekend, so you can get back to work by the time it's USA Day here shortly. And fortunately in Canada, one can still find purists, such as for this famous hairstyle that I have always thought must have originated there, likely in Hockey Falls (fails?): 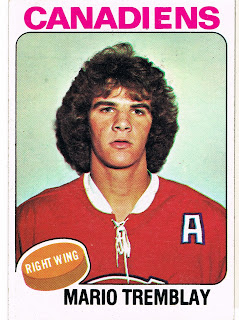 This is a rarely seen variant, the Teased Curls Mullet, and is probably a famous card in Canada, a country of good spirits. Maybe this is why Hockey teams need enforcer players. Don't laugh. I'm warning you. You can't laugh at Canada, Canadians, or Canadiens on Canada Day. Even Bob Probert would agree with that. Let's not make Bob mad now.

Posted by BaseSetCalling at 2:13 PM
Email ThisBlogThis!Share to TwitterShare to FacebookShare to Pinterest
Labels: 13 Series 2, Alternate Cap, Baseball on the TV, Hockey, Lurker, Yeah I Read The Backs