When will the first Tweet be printed on a baseball card?

Or even the first Twitter handle? Those are all listed on Baseball Reference player pages already, which is of course yer average fan's 21st Century baseball card, sans nifty photo. Here is perhaps an obvious card image to show from Series 2 on the subject of Twitter... 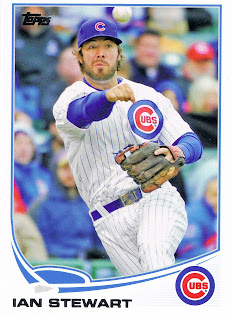 ...given the role Twitter played in his career arc. He even looks like he is launching a sneer visually too. Though of course, he gets the last laugh with his 2 million dollars this year for flunking out of MLB, as he reminded all the Twitterers and all the rest of us that just read news "papers."

That story isn't in and of itself why I flagged this card for a blog post while collating my Series 2 cards. That happened when I read the back: 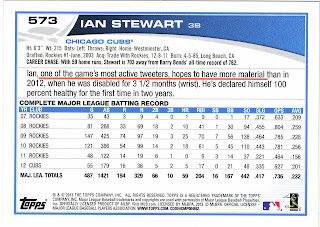 Looks like the Topps Voodoo strikes again. Ole Ian certainly got some more material going this year, but it sure didn't turn out how he hoped. Well played Topps, well played.

I'm neither a fan or foe of Twitter. It's just something I don't have time for. If I were to start absorbing Tweets, I'd have less time for .... Baseball Cards. Ya gotta have priorities in life.

As someone who enjoys writing, one might think I would be opposed to reducing communication to 140 character bursts. I find that to be both positive and negative. Forcing my thoughts into strictly limited lengths might be a good thing for me. But for nuance and grown-up conversation, it is decidedly not.

I suppose I might get dragged into tweeting some day. I resisted "the 'book" for a long time too. Although I have enjoyed cutting-edge technology my entire life, that lifetime of electronic communication (typing at people on a screen since '84 or so and experiencing both angels and devils the whole time ever since) has lead me to appreciate 3D life a bit more than many folks I know.

I would like to connect that sentence to 3D Baseball Cards that I love, but that is too much a stretch for really just a shameless plug for my desire for those little pieces of 2.5" x 3.5" plastic-coated cardboard.

So the essayistic meanderings should probably draw to a close for tonight. I told you that Twitter might be good for me.

And whenever an @handle or a #hashtag or even the little blue bird itself finally does appear on a Baseball Card, intruding yet another incessant reminder to look at a 2D screen into my 3D life, I predict it could be on a Yankees card. They seem perfectly fine with full contact social media (and always have, really). Getting back to Ian Stewart up there, my electronic headlines (tweets, basically) show me the Yankees have expressed some interest in the sacked third sacker. This is just exactly perfect - the Yanks just can't seem to get enough recently injured third basemen who used to be able to hit their share of Home Runs and can anger their bosses 140 characters at a time.

I'm also sure that anyone who can read tweets as a sort of legitimate part of their job, such as Baseball Card-back authors, will soon be unable to resist borrowing a little content from that increasingly ubiquitous little blue bird. Tweet Tweet!

Posted by BaseSetCalling at 12:00 AM
Email ThisBlogThis!Share to TwitterShare to FacebookShare to Pinterest
Labels: 13 Series 2, Topps Voodoo, Twitter, Yeah I Read The Backs