I Don't Know, It Must Have Been The Roses

All I know I could not leave this card behind: 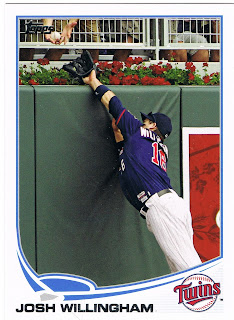 I'm sure they are on some non-sports cards I have, and some I don't have.

I spent some time poking around the internet for some details on this photo, but couldn't find any. The Twins don't seem to have a solid color road alternate uniform, so this has to be from Target Field. I have seen some identical white grating in some photos of the ballpark. It figures that one of the friendliest, classiest states in the country, Minnesota, would decorate their ball-park so tastefully.

It would be great to know who hit what appears to be a Home Run here. Or maybe it is a new special subset of cards, the "Fan Interference" set. Can't say I've ever seen that on a baseball card either. Such a mystery here...what did the Umps have to say about this one? Let's just hope no roses were harmed.

That picture is of course from the short-prints distributed with 2013 Series One. The subset even had it's own name, and unifying theme - the "Out of Bounds" cards. The short-prints in Series Two have at least two different themes, and no name for the collection. The Out of Bounds image theme itself was not applied that consistently across the Series. Buster Posey's short-print image variation is the same exact action shot as Geovany Soto's regular base card, for example. But then when is Topps ever completely consistent?

I like the Series One cards, and am working on a set of them. I currently hold 5, with 2 more on the way. I bought my first one a few days ago - Andre Ethier, for only $3.50. I am hoping prices on them continue to drop. It will be a long time before I ever purchase the Bryce Harper card on this checklist, although I have his '12 Update short-print to miraculously find a trade partner for.

I got the Willingham card in a trade with the Chipp 'n' Dale blog; I'm pretty sure I approached James with an offer to trade for the Willingham. I can't recall if he posted having the Willingham available, or I just asked for any short-print he might have. I'll post a trade bait post of all the other non-'13 short prints I have up for trade eventually.


I would like to collect a complete set of the 'Sea Turtle' cards this year, across all the sets they appear in. But I know I never will, because I don't like non-baseball Baseball Cards. Press conference cards, San Francisco trolley cards, etc. If they were regular commons worth a nickel, sure, fine. Even a quarter, OK. After that there is just no way I am that collectorly of a collector to pay real money for a picture card that doesn't show someone wearing a baseball uniform.

The card I traded away to get the Willingham is probably worth more than the Willingham on both the supply & demand sides of the "what's it worth?" equation. It was from the 2012 Update set which theoretically would have a smaller print run than Series 1, though us lowly customers are never privy to the true production statistics of the overly expensive glossy picture cards we buy over and over again.

And I am sure the player I traded for will always have far higher demand for his cards than an OK outfielder who probably peaked in run production last year (which probably earned him a spot in Out of Bounds more than fielding prowess). Even though the card I traded away has great lurking clouds and is actually a nice card you can't help but like, I am very happy to have a baseball card with roses on it instead, and also have been thinking well how it will live happily ever after in all good company.

Posted by BaseSetCalling at 12:24 AM
Email ThisBlogThis!Share to TwitterShare to FacebookShare to Pinterest
Labels: 12 Update, 13 Series 1, Cloud Card, Out Of Bounds, Short Prints