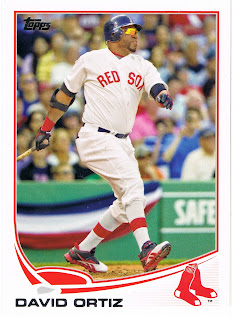 Amidst a baseball card full of old — throwback uniform, Americana bunting decoration — and new — Those Sunglasses, elbow pad — we have another mystery item there in Big Papa's back pocket.

I still don't know what is in Starling Marte's back pocket either. But I think it is probably the same thing.

Since Ortiz isn't playing in a hillbilly family reunion old-timer's game here, I have to rule out a flask for a little celebratory nip upon reaching first base. While I wouldn't have ruled that out for players playing in a century with a number 2 less than the current one, I'm sure an image of that would have been temperantly kept off the little tiny baseball cards back then.

So I'll have to go with sunglasses case, though I'm not sure why. I'm still not used to seeing batters with shades on, but then I don't actually watch much baseball; just baseball cards. I guess it would be nice to have a case for your glasses if it gets real cloudy by the time you reach first base. A lot can happen while Ortiz goes from home plate to first base I guess.

Or, a case for switching out batting gloves for running gloves. I have heard that batters are particular about their batting gloves and switch them out upon reaching first base. That Ortiz might end up doing a Charlie Hustle slide somewhere on those base paths, you just never know. Best have the right gloves on.

I will never understand why anyone would want something that big in their back pocket while running the bases. But then of course no one really expects David Ortiz to leg out infield singles.
Posted by BaseSetCalling at 11:07 AM
Email ThisBlogThis!Share to TwitterShare to FacebookShare to Pinterest
Labels: 13 Series 2, What IS that?