I found a Manager on a 2018 Baseball Card

Where have you gone, Joe Maddon? Do I have to buy a Topps Now card that I don't really want to see a Manager on one of my baseball cards, ever again?

Or do I have to buy a couple cases of Archives to eventually tease one of the Fan Favorite autographs out of the 2018 release?

Yes, there were some actual Topps Manager cards produced in 2018, via those 2 products. Both active, and retired. But not very many.

So I was quite pleased when I noticed something on this particular baseball card that I set aside, destined for a date with the scanner. 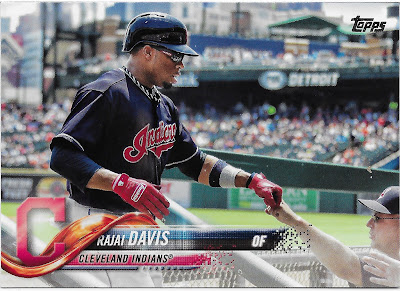 I took note of that one for a really long running side-collection type project I am always working on, and you will see here, someday, I hope. But no, it is not for a collection of cards shot in Detroit, as much as I like those. And I like that card, a nice horizontal of an only very occasional Action Image baseball card motif - Returning to the Dugout After Scoring a Run. Well, most likely, thought it might have been a successful Sacrifice perhaps too.

And pondering that idea, I noticed just who was congratulating Rajai there - one Terry 'Tito' Francona, Cleveland's Manager.

On a 2018 Topps baseball card. It's not, of course, "his" baseball card. And the few examples of Managers on a Topps Now card or the 2018 Archives cards were probably produced with a contract just for that card - because they all had Autograph versions. So those cards don't quite answer one of the miscellaneous questions about current, up-to-the-season baseball cards that I always have about them:

Does Topps need a special contract with the 30 MLB Managers, apart from their contracts with MLB and the Major League Baseball Player's Association, to include them on baseball cards?

I have no idea.

Sorting some cards the other day in my often one-season-behind approach after always working too many Away Jobs, I noticed a Terry Francona card in 2017, too: 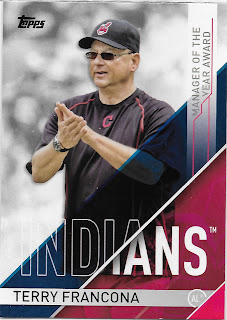 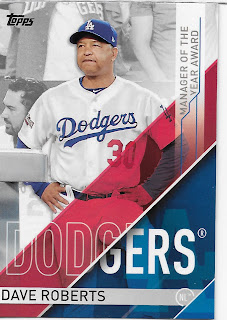 And as far as I can tell, these 2 cards did not appear with any autographed version, though of course they definitely have a Red parallel, and a Blue parallel, and maybe a Silver parallel, or maybe no one can tell the dumb Silver parallels apart from the regular version, and nobody cares, because I doubt even obsessed Super Collectors really want a parallel of an insert card, even though they probably track them down and buy them for some reason that the rest of us will never understand (do they themselves?), anyway.

So without the de rigueur "Auto" edition of these, there probably wouldn't be a singular contract between Topps and Francona or Roberts for those 2 cards either.

And again as far as I can tell, those were the only 2 Active Manager cards Topps produced last year, too, except also for a scattered amount of Topps Now cards as in 2018, and a couple Retired Managers in 2017 Archives, with normal base set cards even, and some Fan Favorite Autographs checklist entries for the Managers, which also had some Umpires on it. Wait, what? Yup, some Umps on a Topps baseball card, too ... stay tuned ....


Posted by BaseSetCalling at 6:36 PM
Email ThisBlogThis!Share to TwitterShare to FacebookShare to Pinterest