I dunno what it is, technically. I just know that I like 'em. So my plan is simple - collect 'em, trade 'em, just as Topps has advised all my life.

I am talkin' here 'bout some cards from the brand new for 2018 Topps product "Big League", which I enjoyed. Particularly these, uhh, baseball cards: 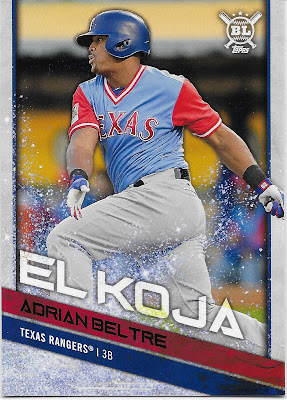 The reason I waffle on what to call them is the back: 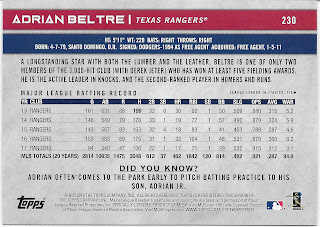 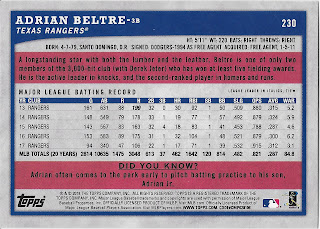 err, uhh, or mostly not. It does have the same card #, so the easy way to 'catalog' this card is as a parallel. But what about the front ? 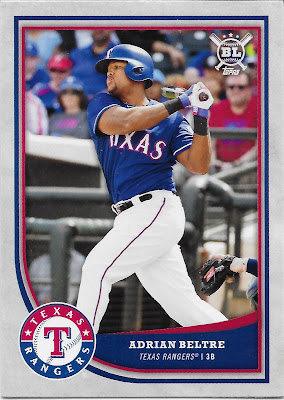 Just another pretty nice red, white, & blue baseball card of a player playin' baseball. But clearly a different card than the El Koja card up there.

I like nicknames in baseball. Is there anyone that doesn't? C'mon now. The Nickname parallel-insert are also called the "Player's Weekend" insert-parallel. Oh dear, now we have 2 names for the same subset. Wait, I thought we ruled that out.

Anyhow, these weren't the only Nickname parallel-inserts Topps produced this year. The other day I stumbled across these scans of some 2018 baseball cards: 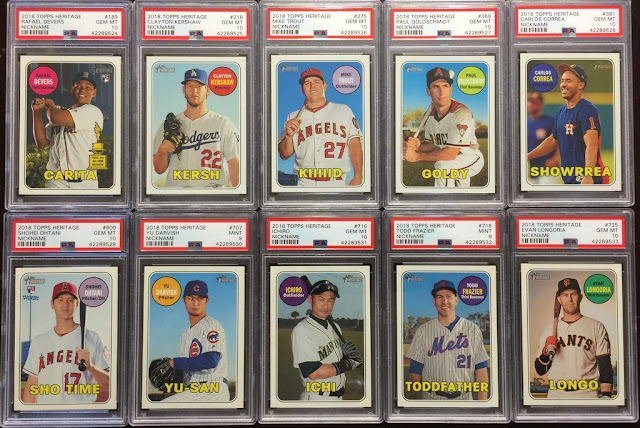 How much did those baseball cards cost? I went with the tried and true concept of - if you have to ask, you probably can't afford them. (Full disclosure - kind collector allowed me to share the results of his well done collecting effort with us, here).

Although those probably share the nicknames with my kid-price Big League cards, they are not from Player's Weekend, nor do they sport unique images - just alternate (wait, I thought we settled this already) names on the front.

And my allowance-friendly Big League insert-parallel cards are not the only Player's Weekend cards this year; Topps also made a run of special Commemorative MLB Player's Weekend Patch Cards issued in blasters with 2018 Series One, commonly called a 'Manufactured Patch' or a 'Manu-Patch', which always sounds faintly disgusting, but at least we don't have to argue about whether it is an insert or a parallel. Do we? Is it part of any "set" at all? Let's not go down that rabbit hole, I'm already confused enough.

It's not easy to feature the Player's Weekend nicknames on a card. The nickname is on the back of the uniform of course. Do we want a 'set' of cards like this one 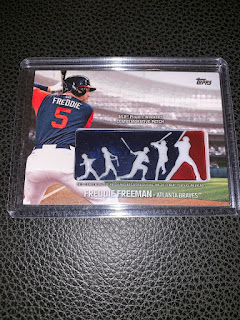 I don't. (Full disclosure - not my card; image stolen from online sale site somewhere.) But hey, look, it's "Freddie" Freeman's butt. And Freddie Freeman's nickname is "Freddie" - who knew? Do we need a special card for such an exciting nickname, when most every player in MLB had a 'nick on their uniform, but we only get 25 or so cards in a special checklist for them?

And the Player's Weekend featured special uniforms for the 3 game set - who doesn't like seeing a special uniform on a baseball card? I mean, besides Chris Sale.

But that "Freddie" card doesn't accomplish that very well, now does it? Of course, that never stops Topps from making a Special Uniform card that doesn't really show the Special Uniform. Don't make me show off quite rare and expensive Heritage parallel-insert-variations that I don't actually own, once again.

To show the special uniform, we pretty much need to see the front of the player. But then we don't get to see the nickname on the back, and Topps can't be bothered to print it on the card for us. You already bought the blaster and paid extra for the Special Commemorative Card - what do they care, now?

So naturally, since they already have your money, they can go right ahead and give you a Special Uniform + Nickname card and show you exactly neither one: 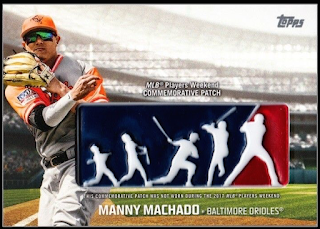 And I just wanted to note that I don't really care for the Player's Weekend patch, to start with. Not just the pointless little plastic thing Topps 'manus' for us, but even the actual patch player's wear on their right sleeve, as modeled by Manny here. I just don't get the patch, really. Are we supposed to remember back to the way humans evolved from some other kind of hominid? Why does the player swing backwards as he evolved? Will this be on the test? Did baseball players evolve differently? But then given the model shown here, there might be something to that last question. Is he about to flip the bird to the photog? (Full disclosure: I don't purposely collect Manny Machado cards, except when I want to Complete The Set, and I am left with little choice in the matter. So that last image also came from, somewhere. How about if Topps trades out Manny for Madison Bumgarner? Do we have any objections?)

Fortunately, for big fans of cool baseball cards everywhere, kids are far more discerning customers than high end baseball card collectors. If you promise a kid a special nickname card in his pack of baseball cards, you had better show them the nickname.

And so here in Big League, Topps delivers: 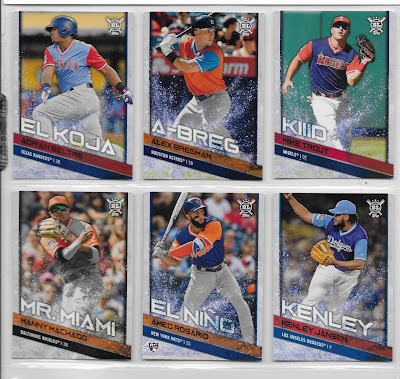 Though probably the kids don't care if they get to see Mr. Miami's special uniform. They already know it's dirty, too. That's what happens when the players splash around in mud puddles, like on these cards.

So yah, eh, I liked these cards when I first found dem, way up dere in da U.P., eh. Even in the back backwoods Topps makes sure the children, the children can get some fun new baseball cards to collect - and trade - I've got just one double so far - the Jansen card shown here. "Kenley" - who knew that one?

Those are the only 6 I have so far; 24 more insert-parallels to go. But fortunately, there seem to be several dozen copies of each for sale online, for just spare nickels, dimes, and quarters from my allowance, but none of them cost an actual paper George Washington. Which for my love of fun little baseball cards, is just exactly perfect.
Posted by BaseSetCalling at 8:56 PM
Email ThisBlogThis!Share to TwitterShare to FacebookShare to Pinterest
Labels: 18 Big League, 18 Heritage, 18 S1, Alternate Uniform, Binder Worthy