These can't possibly mix, can they? I mean, we are normally cooing over cardboard captures of the Boys of Summer - not Winter. But then this coming summer, Winter will finally arrive (on HBO at least) in Westeros, after years and years and seasons and seasons of warnings about it in Game of Thrones.

But I digress. I am actually quite pleased with the forecast for this weekend, though I suspect many of you will not be. I am snug as a bug, well north of the big storm system. And it will drop up to a whole foot of snow on one of my jobsites for the coming Spring, in northern Ohio, which should significantly help flatten all the vegetation on it, making it quite a bit easier for me to plant 7,000 some trees on it.

However, all is not icy frolicking fun up here. This crazy government shutdown is becoming more challenging for me by the day, as I am largely a contractor for the Federal government. Their employees will ultimately draw their pay for this month; I will not. Blogging about my worthless baseball cards is one of the few things helping hold sanity together, right now.

Topps, that's who. They can't really let a month go, buy without a new baseball card product for us to go oogly-googly over, can they?

I know I certainly can't, no way. Though with Series 1 purchases on my horizon quite likely to be quite limited, it has been nice to be working on my gonzo collections and sharing my google-oogle results with you.

So while I enjoy the last rays of sunshine today and you are settling in for a home-bound weekend with a snow-covered driveway and an Internet connection, let's see what I found in a 2018 Topps Holiday Box.

This guarantees One Hit Per Box, junkies! I confess, I kind of like that. Lottery Tickets are the ultimate low rent, past-Midnight-on-Christmas-Eve-after-liquor-sales last minute Christmas gift, aren't they? But this was a Christmas present for myself, purchased somewhere closer to Turkey Day than Santa Claus Day. Oops. But even early on, a 1/1 Gold Snowflake Shohei Ohtani Autograph card would certainly create a long month of Christmas cheer, now wouldn't it?

I Got: Dustin Pedroia Game-Used Relic. I guess it's a good thing Topps stockpiles those game-used jerseys well before a player sits out almost an entire year.

And we can't have baseball cards without parallels, can we? This set includes special "Metallic Snowflake" parallels, with embossed Snowflakes. I kind of like those, too.

I Got: Miguel Cabrera. Which was a good thing, as that was one partial point of this goofy exercise. I wanted a Miggy card with the Snowflakes on it, and I even got the good, special Limited Edition, hurry on down to the Big Box before they all run out, sometime next whenever version. There is still very good supplies of this stuff for sale, in case you missed out. Pro Tip: watch for the "Extra Value Now $5.98" stickers, coming soon, I expect.

Though I didn't scan any of the glittery cards for you before they left for COMC today, and Miggy is now already locked away in the big box of Miggy cards I have, what I (naturally) really wanted was the base cards. And I didn't know which ones I would actually want until I saw them in hand.

So let's take a look, and for lack of any other way to organize these somewhat absurd baseball cards, let's go with my keeper selections in alphabetical order - 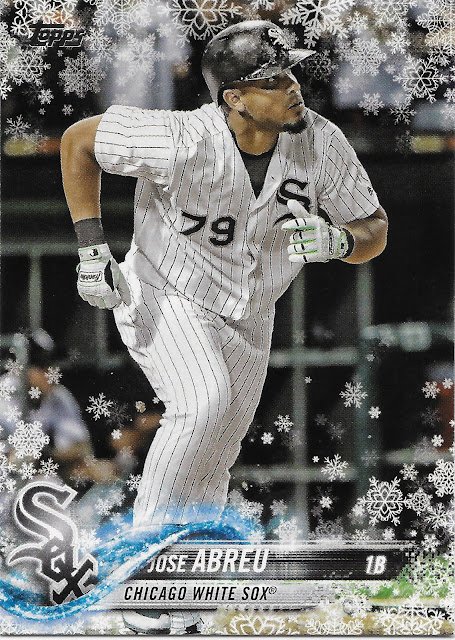 I would have guessed a Cuban would want to wear long sleeves on a chilly Opening Day game in Chicago. Abreu seems a little skeptical of this whole thing, but knows he has to run to first base whether the snow is falling or not, so he better get going.

And you thought these cards made no sense? Well, that really is a live action shot from a live action baseball game, played last April between my Detroit Tigers and the South Siders in Chicago. You would think the other stadium in Chicago would have the snow problems.

Don't believe me? Here is an actually real live action shot from the game, kindly stolen from https://southsideshowdown.com/2018/04/07/white-sox-freezing-in-the-10th-with-a-9-7-loss-to-the-detroit-tigers/ 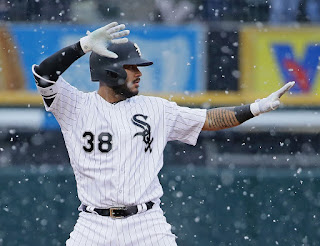 Catcher Omar Nárvaez seems to like the snowflakes, or maybe is trying to touch one, dunno.

But Topps could hardly get so lucky with all of their source imagery for a 200 card checklist. 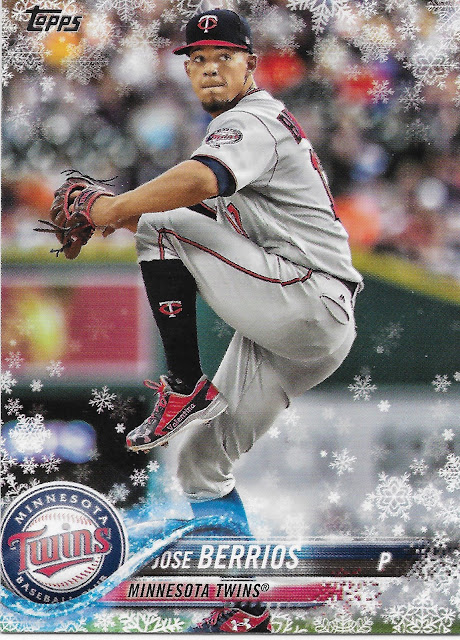 And would any team need an indoor stadium in April more than the one in Minnesota? Pay attention here people - Jose has his road grey Uniform on. No telling where the snowflakes are afalling, here. I just liked this one cuz of the way Jose's bad-ass shoes and his left foot leg kick seemed to pull the light fluffy snowflakes on off the surface of the Water Slide. That's how light fluffy snowflakes work in the 3D world, for all you readers in southern California.

Meanwhile, isn't it always sunny in Philadelphia? Perhaps not for a night game - 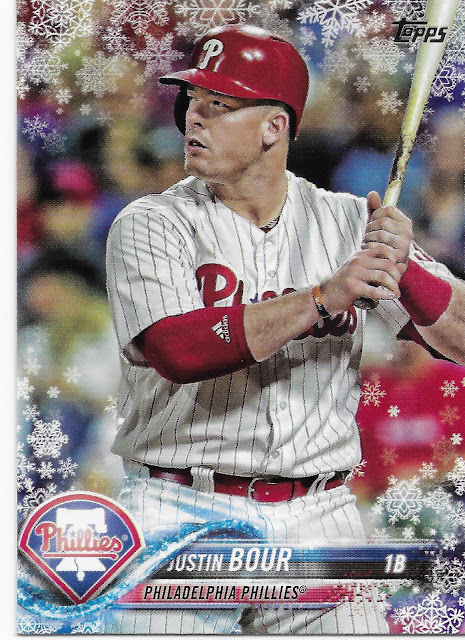 Justin's not quite sure what he is seeing there in the stadium lights. And neither am I - all my Topps baseball cards this year told me Justin Bour plays for the Miami Marlins. On lots of cards, with a special card in Opening Day and even in a set of Water Slides issued with New Era baseball caps. And Update never told he moved laterally in the NL East, neither.

But that's what happens when you get traded on August 10th, past the famous Update Set New Card Deadline of July 31st every year. Topps always has your back with new baseball cards though, and never stops issuing them, ever. This card certainly made me wonder how many other brand new Water Slides might exist in these Holiday Boxes. An intriguing question that I don't have the cash, or quite sufficient curious bored energy, to figure out. If anyone else did, I would certainly take a look though.

Someone mentioned sunny days though, isn't that when baseball is best? 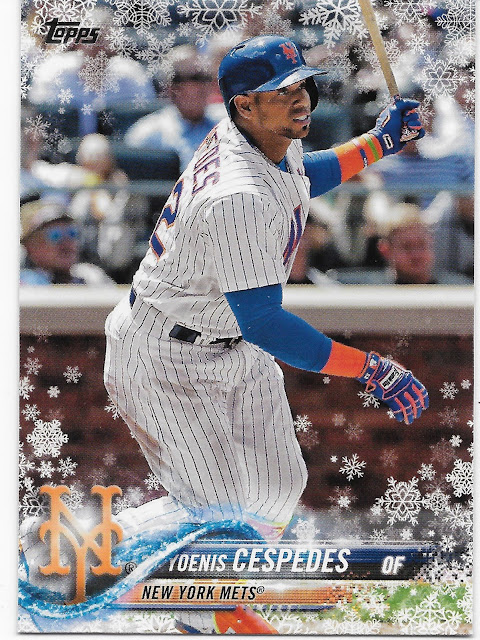 The Latin players aren't seeming very thrilled to be playing on a Snow Day. Particularly in blazing sunshine.

But what can a baseball player do, in the face of such adversity? 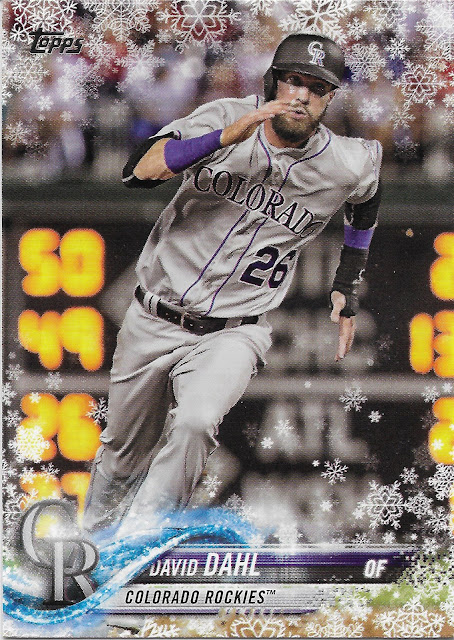 David Dahl knows what to do - run faster than the Snowflakes! Playing near the Front Range, one learns these things I guess, as long as you make it Home before the slipping and falling all over the place starts up. Too bad that card wasn't enough experience for their Playoff elimination game vs. the Brewers this just past bitter cold October had in store for them. Never bet against boys from Wisconsin when it comes to athletic activities in the cold. A pity I didn't set aside any Brewers from this product to test that notion with you.

I would expect the Dutch are used to some outdoor activity in the snow on occasion: 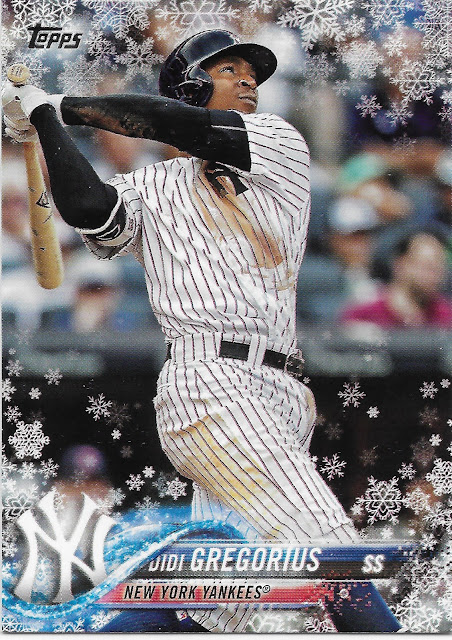 But Didi seems a little dubious.

Can the Dominicans handle a little frozen water flying through the air? 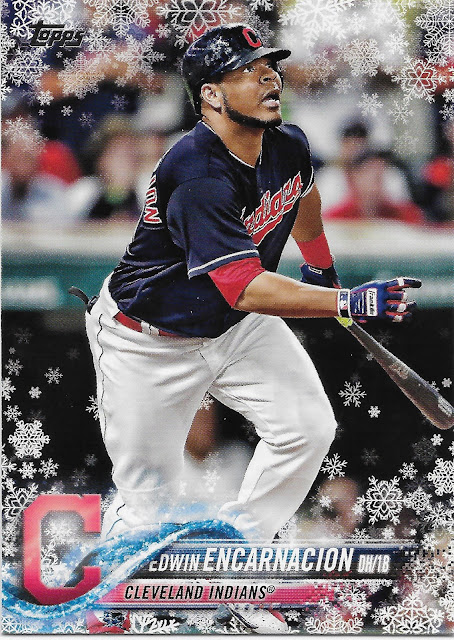 I'm not sure I'm allowed to reprint Edwin's thoughts here. Google might have a policy on that.

How about one of the fine MLB Outfielders the state of Georgia produces regularly? I have seen it snow in Georgia. Once. Has Dexter? 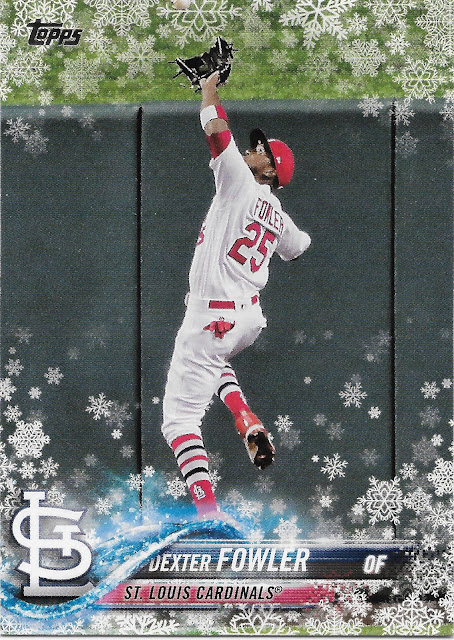 "I got it! I got it!" Oh, wait. Which one is the ball again? This Snowball game looks challenging.

Pitchers are almost always unhappy on their baseball cards these days. 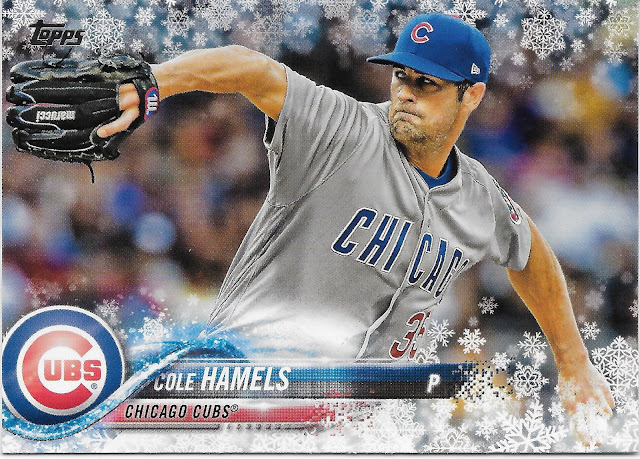 I guess you would be too if you grew up in always sunny San Diego and ended up pitching yet another away game in the snow. Where did Topps shoot all these match-ups anyway?

I think the players are starting to get a little ornery on these cards. 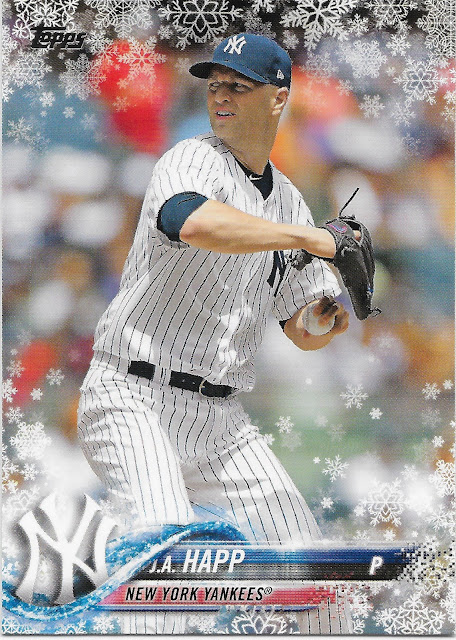 See, James Anthony is sayin', I told you I didn't want to leave Toronto. They have a sensible indoor stadium, when they need it, there in Canada, where it snows a lot. Even on sunny days.

How about the many Venezuelans in MLB today? They actually have a tiny bit of snow in their country, too. Though all the oil they sold everyone heated up the planet so much that their last glacier is soon going to be on life support. Maybe Odubel Herrera has seen it though - 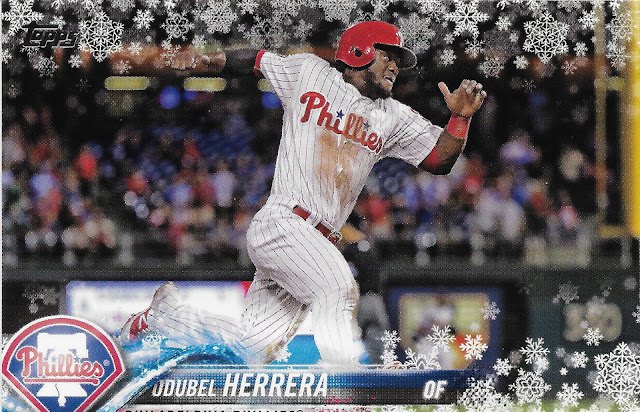 He sure seems to know what to do. Make like David Dahl and get Home before the Umps call this game.

And baseball cards have generally promised me that nowhere in the game is sunnier than San Diego. 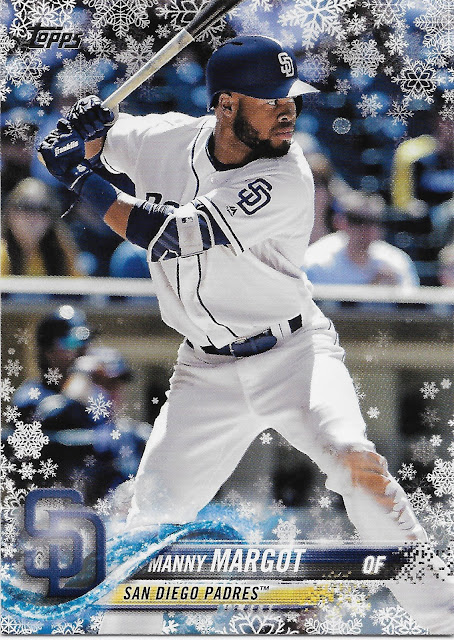 I think Manny is trying to remember that classic rock song he heard in a minor league park all the time when he got to the States, whenever there was a weather delay. Something about if anyone has ever seen the snow, comin' down, on a sunny day. In San Diego? 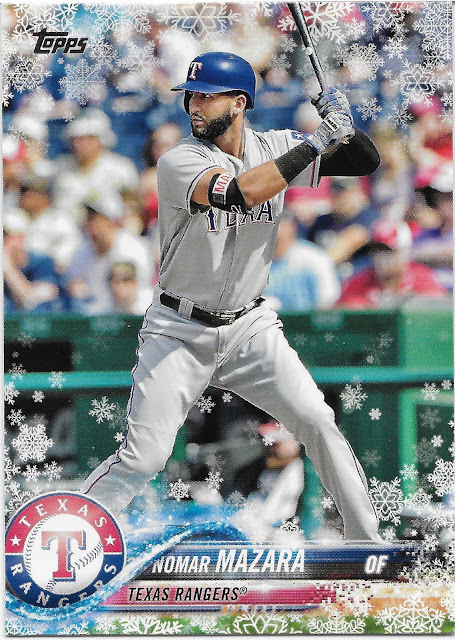 Hardly seems fair for a player used to playing in one of the hottest stadiums in the Leagues. 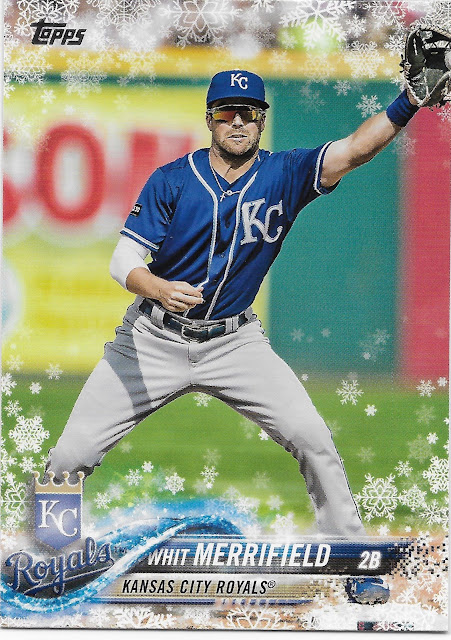 Or one of the other hottest stadiums. I guess blizzards blowing in off the Great Plains can strike Kansas City any ole time, like today, or baseball season. Maybe Whit knows the key to figuring out which one is the ball, and which one is the snowflake, is proper eye-wear for all that glare that comes off snow and bright sunshine. I just hope he doesn't slip on that icy looking base there at the bottom. It's not often you get to see a Base on a Baseball card any more.

Probably though, these outbreaks of flurries are the worst, among the Americans at least, for the players from Florida, where it never ever never snows, right Chris? 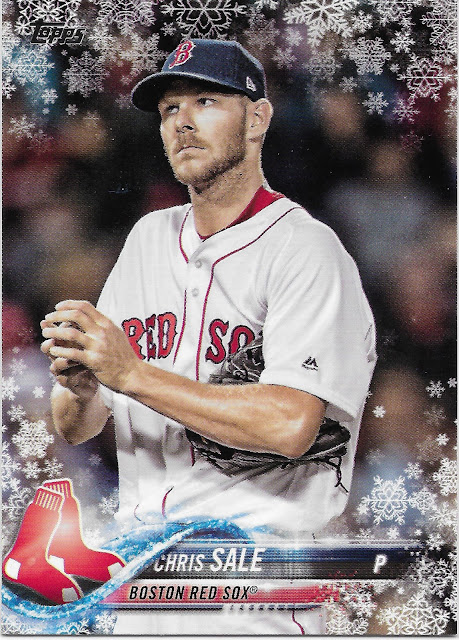 Another keeper for my Chris Sale PC. Though it would be awesome if Topps could print some captions on some sort of children's set of baseball cards, if such were to still exist. They could title this one "Grumpy Cat unimpressed by Boston weather."

Meanwhile it still seems unlucky to get traded to the Yankees for the 2018 season. 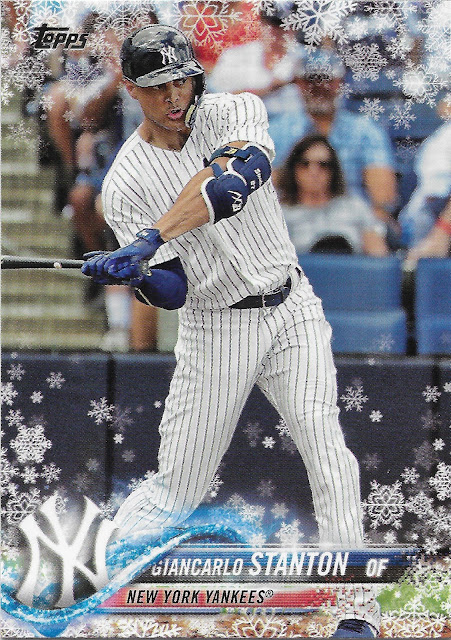 Just another SoCal sourced baseball hero not quite sure just what he is seeing in this crazy game played with a white ball in the middle of all these huge white snowflakes.

But ultimately, as in pretty much all packages of Topps baseball cards, I can usually always find a graphical arts baseball card creation that I enjoy just for its graphicy-ness. 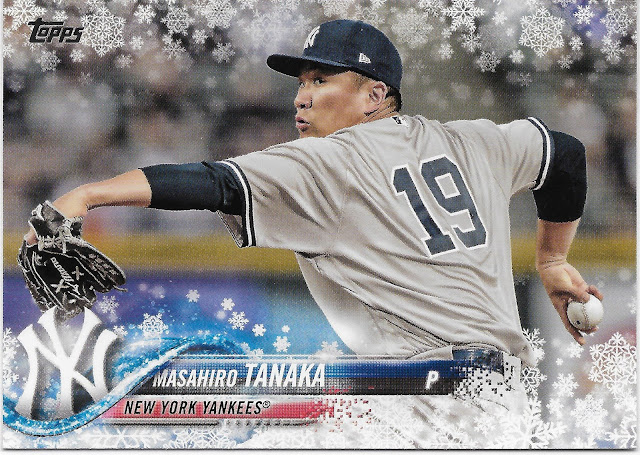 And that one there is just about exactly perfect. Tanaka's front arm motion swirls up the snow flakes for us to go for a ride down the Water Slide and off to Home Plate, though with his fastball about to possibly not fool the guy at the plate, since he can see it so easily. But it will be a fun ride - frozen Water Slides are fast. Did you notice yet that the Water Slide is always blue on these cards? Uhh-huhh, sure you did. My blog readers are sharp like that, like Topps is, with their carefully prepared seasonal products, like this one.

I don't think the Tanaka card is my #1 favorite from this box of baseball cards though. We often admire a player's final, "sunset" card, when we figure out which one it is. And though I know Topps has a new contract with Ichiro for signatures on baseball cards and there will be brand new Ichiro baseball cards for years to come, I also just today read the checklist for 2019 Series One - and Ichiro is not on it, on the #1-350 portion, anyway. So perhaps this card 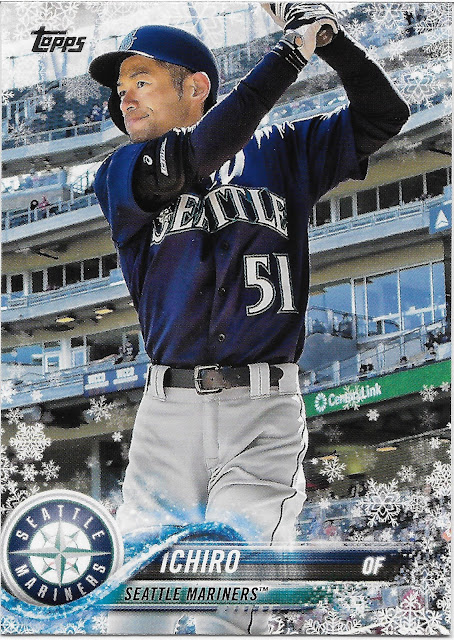 could become, technically, Ichiro Suzuki's final sorta-regular issue Topps baseball card. And it all just kinda fits. The whole card is icy, with the blue colors all over, and what even almost looks like ice starting to grip Ichiro's torso. A bit of a chilly reminder, as with the spooky protagonists on Game of Thrones, that Winter comes for everyone, even one of the all-time greats of the Boys of Summer.

Posted by BaseSetCalling at 7:35 PM
Email ThisBlogThis!Share to TwitterShare to FacebookShare to Pinterest