Is that a picture of a baseball player? 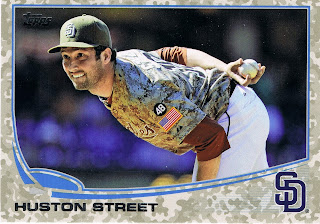 A "Camo-Camo." I knew when I first heard of the Camo parallel I would want one of a Padre in their Sunday best. And I knew I would have to resort to the drudgery of simply buying one. So I finally threw in the towel and made an eBay account, cuz I kind of doubt anyone would trade one of these away. Sure, there are probably better Camo-Camos out there where the Friar pictured has more Camo on display, but I like the horizontal television-like cards with the more unique parallels. The E. Cabrera card has the Camo uniform on too, but shows so little uniform you would just get lost on Tatooine. Come to think of it, that would make an outstanding Camo-Camo too.

I just happened to run across this one first, so here it is. And here's the back. You know, you buy the baseball cards with the pretty pictures for the article of reading material on the back, right? 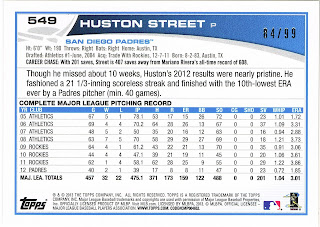 The Parallel Project moves along. I finished posting the 2012 parallels I have available. That is mostly the end of what I can put on the trading block. I have a stack of the 2011 Cognac / Liquorfractor cards on reserve for a blogger, but if you have a want list of those I could check that stack. I haven't listed my 2011 diamonds because I really like the occasional "Beam me up, Scotty" bonus peeps in the background that have been diamond-ized. And I might chase a set of them when this crazy project is complete. I have to find good homes for all my extra cute little baseball cards somehow. Let's Trade!

Still to go is to putting together a want list for Series 2. The base set called me and told me it was time to get cracking on putting the binder pages together, so I could then put together the pages for the parallel cards on visual criteria, and I got that done last night. A random lot of Blue Sparkle crack is winding it's way towards me as I type. Once that arrives, I can assemble them along with the dozen.5 golds I have from Series 2 and put together the first Series 2 want list for the project.

Why I think I will start binder-izing those Series 2 parallels right now with this nifty Huston Street card. Hey, wait, where did it go? I can't seem to find it. It was just here a second go, right on the scanner. Oh-nooooooo Mr. Bill, it has escaped into the wilds of the card table of baseball cards. This could be a long Chase.
Posted by BaseSetCalling at 1:15 PM
Email ThisBlogThis!Share to TwitterShare to FacebookShare to Pinterest
Labels: Baseball on the TV, Camo, Parallel Problem