In the deluge that is 21st Century baseball cards, I know I can't collect everything I like. Even with cheap 'low end' cards produced in mass quantities and assembled somewhat affordably, I can't keep 'em all, even if they were free.

Perhaps if I were a little more content with completing a project and filing it away in a dark closet in a long skinny cardboard box, very rarely to be ever seen again, I could keep more cards.

I collect cards largely on the visual appeal -- so I want to see these delightful little pieces of cardboard now and again, and a bit more often than is realistically possible once the cards are all entombed in those long skinny graves.

Which is of course where binder pages come in. Aside from dramatically improving the eye appeal of the horizontal cards, as I was babbling about just yesterday, they obviously greatly facilitate actually gazing upon all of one's baseball cards. Which is much better than just admiring the latest calculation of RC quantities held cross-indexed with hourly eBay bid results to give an update of the current value of a bunch of cards all stashed away in a long skinny column on a spreadsheet.

Seems apropos for the 200th post on this blog.

I have a lot of these all half-ready to go, lined up in a long skinny cardboard box, where a Bubble Gum Card rests comfortably next to a Salvador Perez card next to a So.....Thirsty card next to a The Pitcher Is Smiling At Me card next to an eventual Nifty Nine - Donruss 88 next to a Honus Wagner.

Yes, I have slowly come around to the idea of Player Collecting. But rather than obsessively accumulate 999 baseball cards of the same player over and over again, my baseball cards will perpetually be starring on Survivor: Ultra•Pro. If a card doesn't make the cut as one of the 9 best ever made (or, OK, sometimes 18), it will be voted out of the baseball card binder, by a single judge - Me. This will also work for sets - even 1988 Donruss has 9 most excellent baseball cards, I am quite sure. And for whatever goofy themes come out of my warped mind.

Some Nifty 9 efforts in that long skinny cardboard box only have 1 card designated for the final checklist, so far. Others are already overdue for a bit of curating action. I could probably survive being shut-in by a solid month of Arctic blasts if someone would just give me 25 pounds of Junk Wax ahead of time. Actually, I think I already have a whole month's worth of playing with worth-less baseball cards, all ready to go, if someone would just give me a month's worth of the most expensive thing on our collectively hallucinated planet - Time.

Speaking of which, it has been a long time now since you have seen any baseball cards on this here baseball card blog. Let's get wax crackin' 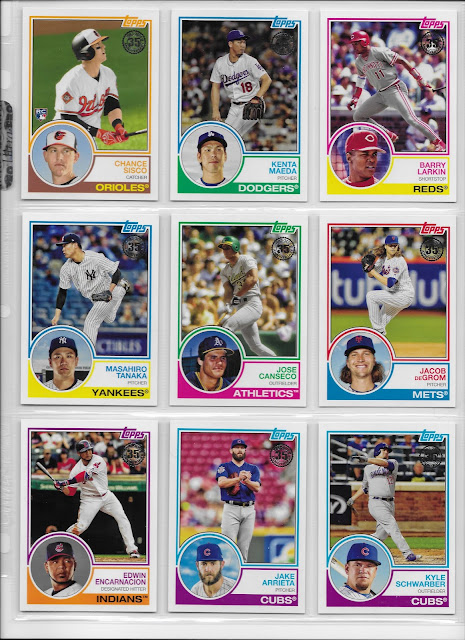 I like 1983. I would like to collect all the 1983 style cards Topps made this year. Just the basic version pictured above would include 250 cards. But would exclude hundreds more created for the "Silver Packs" cards given out with purchases of boxes and cases of Hobby/Jumbo boxes, printed with the "Mojo" refractor pattern on a checklist running to 150 cards. I just wrote 'hundreds' more because I don't know how many players might be on several Autograph checklists with yet another 1983 style card, but possibly a different image than the other 2 checklists, or are not on either of the 2 checklists to start with but do hang out on the Autograph checklist. And then there are a set of these style cards in 2018 Topps Chrome on a short 25 card checklist, with an even shorter autograph checklist, possibly with yet more unique varieties to be discovered, dunno.

That would be a fun collecting project, chasing all of those down. But it would not come all that cheap; though some cards might be had for 50¢, a handful of them trend north of $5 because we now live in the age of Rookie Card cards - why collect just one Rookie Card when you can acquire dozens of Rookie Cards all of the same Rookie? Plus, Hall-of-Famers & famous Veterans beloved by baseball card collectors can also be hard to track down. Player collectors who focus on a retired player only get a new card every now and again, so when they appear on a checklist like this, those singles sell pretty well and supplies dwindle quickly.

I did just read a thought from one of the biggest case breakers in the 'business', who mentioned that the recent 100 card 'retro' checklists can sell for up toward almost $1/card in a complete set. If I were to assemble these fun little cards via that route, I would probably not have been able to buy any other baseball cards at all this year.

And what I would really, really enjoy doing is collecting the black-bordered versions of these cards, which have a print run of /299. Those look sharp, from what I have seen of them online. Oh, to have 9 of _those_. I did not pull any in my random retail efforts this year, though I did pull a nice /50 Gold version of Anthony Rizzo; already on its way to COMC as I type however. Maybe that can turn into 9 of the black cards, from the inevitable RCs who become a FAIL because they didn't finish in the top 3 of the MVP vote for each of their first 3 seasons, or from amongst all the other washed up has-beens nobody cares about in the world of baseball cards. Those /299 cards will eventually be available for a fair bit less than $2.99, if you let some dust build up on them first and shop carefully. I think I can already see Nifty Nine #99 on the horizon, now that I think about it.

So I am left with picking my favorite 9 of the pert-near 2 dozen that I started with. I am happy with how it worked out. I've got a Rookie, 2 1980s stars, 2 recent Cy Young winners, some 2018 MLB regulars, some sluggers, some Aces. About similar to how Topps puts together one of these checklists. If I had a big pile of them it would be fun to assemble a colorful starting 9 team, one player for each position. Alas.

My favorite is probably the Canseco card - Pink always looks good on a baseball card as it reminds me of the bubble gum. But Jose basically disappears in the action portion of his card, so on other glances at this Nifty Nine, the De Grom card is my favorite, with his cheerful profile shot just before his excellent 2018 season. The next time I flip to this page in the binder, maybe the Schwarber card will be my favorite cuz it somehow reminds me of that kid Big Al, who likes to hit dingers - why doesn't he have a baseball card yet? Anyhow, such is the nifty-ness of cherry picking 9 cards to enjoy, rather than mixing them in with cards you enjoy a bit less.

You may notice one subset style I did not include in my permanent exhibit of 2018 1983 Topps - the All-Star cards. That design has been used at least twice already in the 2010s decadal run of 'Archives' look-back checklists of varying lengths from Topps. I didn't keep any of those, either. Though I like big stars on my baseball cards, the 83 is a bit too big for my taste, I prefer the inset profile photo, and I would rather just have the real 1983 All-Stars assembled all together, some day, in my unlimited time and money baseball card fantasies.

I also noticed that many of the '83 All-Star versions, 75 of which are included only in Series 2, were in short supply on COMC. Which is more common for cards from Series 2 on a long checklist, and also for most retired players in a general sense, when considering inserts in brand new sets. S2 is the release in the S1/S2/Update Topps Trinity line every year which has the lowest print run. Even the Trouts and Harpers from S1 and Chrome insert checklists can barely be given away, something a bit less of a problem for S2 inserts and parallels. This is making me like the partially 'whatevered' Series 2 product a little more all the time. The half-dozen S2 '83 AS cards of 70s-90s stars I pulled will probably turn into a similar # of retail parallels I need for my 2013 project - thanks, Topps (& COMC, too). Or maybe some of those black cards I was just dream-blogging about, we'll see.

There was also one problem card I found on that '18 '83 All-Star checklist, which I lucked into pulling twice. If I kept all of them in their glossy binder page zoo cages for all eternity, I would have to look at this card whenever I flipped those pages - 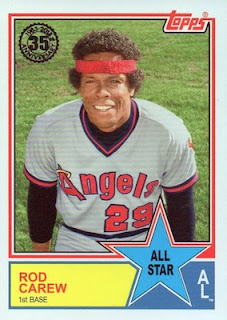 Now, before you click away to some other favorite corner of the Internet, scroll back up to the first Nifty 9 I brought you and make that your take-away image from this post, and be glad you have a thoroughly professional baseball card curator looking out for you, always.

Posted by BaseSetCalling at 10:23 PM
Email ThisBlogThis!Share to TwitterShare to FacebookShare to Pinterest
Labels: Nifty Nine