Does the person writing the back...

...look at the picture on the front?

This would seem to be an elementary step in the creation of a baseball card. 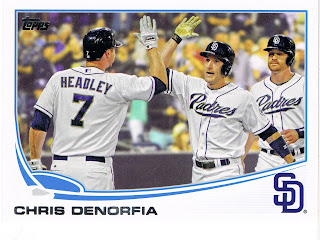 When we flip this card over, we learn that Denorfia hit the 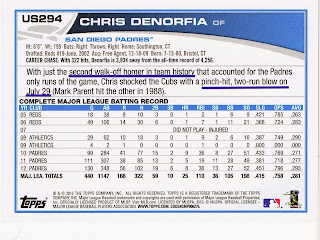 and the game logs confirm this.

Then when we flip the card back over it does appear we are treated to a picture of this Walk-Off Home Run, and ever so tastefully, without one of those pile-up-at-home-plate shots that are becoming a bit overdone, particularly if you picked up the Opening Day insert set "Superstar Celebrations" earlier this year. The Home Run in question was a two run shot which also scored Yonder Alonso, who is returning to the dug-out just behind Denorfia there. Nicely done, Topps.

Topps also frequently likes to show off what a player is known for at times, be it their glove work in the field, or slugging prowess at the plate. Apparently they are somewhat fond of an increasingly rare type of player in the game today, a base-stealing threat: 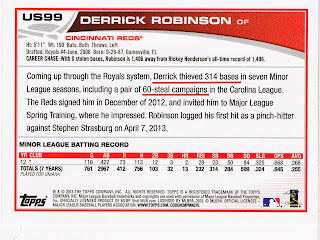 Flipping this card over visually reinforces the point: 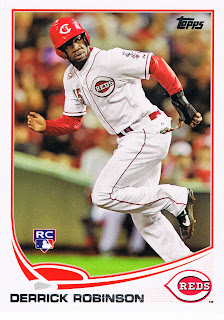 Unfortunately Robinson couldn't get any Topps Voodoo to help him here, as he only managed to steal successfully 4 times in 9 tries, despite 113 SBOs, or Stolen Base Opportunites. Dusty Baker at the helm, makes sense to me. Now if only Topps had chosen to elevate Billy Hamilton to the Update set instead....but then maybe with next year's cards having the position on the front again, we can finally get a second "Pinch Runner" card out of Topps. It's been 38 years now after all.

Another great base running Rookie Card is this one: 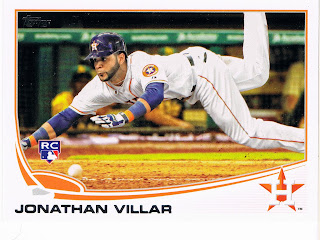 And sure enough, the Topps card-back writer is on the case once again: 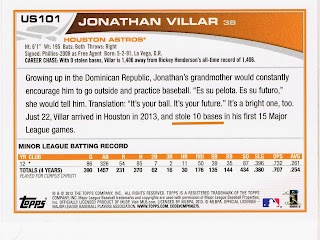 Perhaps that is only a marginal connection to the front of the card, though Villar did have one successful steal of Home this year.

More often though, the back of the card fails to connect with the front of the card: 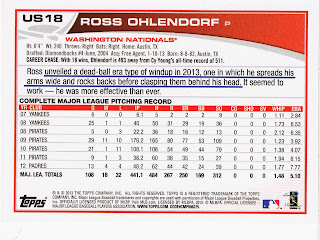 which sounds like something that would make for a great baseball card,
particularly in a set that almost always features a pitcher in the actual motion of pitching and generally ignores the classic baseball image of a pitcher holding his glove in a set position just before starting his wind-up. At least we do get to see that on the great Jon Lester card in Series 2.

Will we get to see Ohlendorf's unique new, old wind-up? 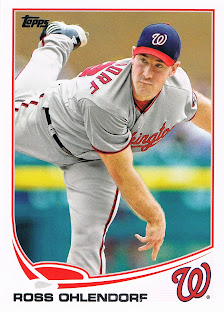 Just as on this card: 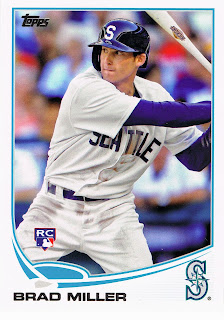 Which is also a perfectly fine baseball card. We get a throwback uniform, and a sweet shot of the HICKORY there too. Pretty nice lines as well, but they lead straight to the problem — the back of the card holds the disappointment with what we could have seen on the front, if it hadn't been cropped in so tight like so many of the Sea Turtle cards: 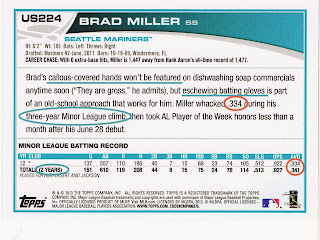 And apparently Topps isn't too careful with reading those minor league statistics either.

As much as the information on the back of that card disappointed anyone who enjoys unique baseball images, this next card is much more of an oh-what-could-have-been: 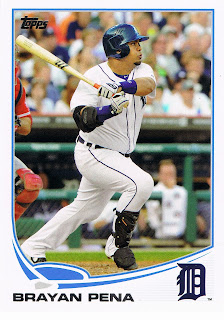 This card starts out nicely enough; Pena is a journeyman back-up catcher known to be better standing at the plate than sitting behind the plate. In other words, he is a decent enough hitter but not so good on the defensive side, and likely to remain a journeyman back-up as a result. The Tigers released him a few days after their season ended and he quickly signed a 2 year deal with the Reds, where I'm sure we'll see him on an Update card again, after next season is over.

Or maybe not. Journeyman back-up catcher Gerald Laird was let go by the Tigers after last season and immediately signed a 2 year deal with the Braves. But apparently more useless Home-Run Derby cards were more worthy of printing than a new baseball card of a Major Leaguer on a 25-man roster for the entire season, as Laird did not receive any Topps cards at all this year.

Be that as it all may, it is the back of Pena's 2013 card that holds the real let-down: 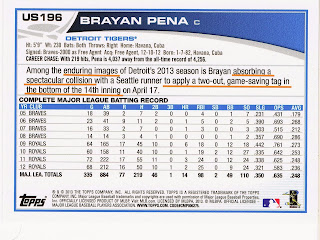 Now, reading all that, don't you just want to see it all happen? I heard the call of that play on the radio, and it was one of the few times I used the video highlights feature of the MLB '13 app on my phone, which was well worth the effort.

This is one of those rare times where I wish there was more than one licensed baseball card manufacturer. Though I am content with collecting one main set per year, I think a scrappier card manufacturer could likely have exploited this much better. I'm sure Nick @ Dime Boxes could tell us exactly which former baseball card company would have jumped at a chance to put the following image on a baseball card. Although I am not generally a fan of cards that obscure a player's face, after all that build-up on the back this could have been a simply epic play-at-the-plate baseball card: 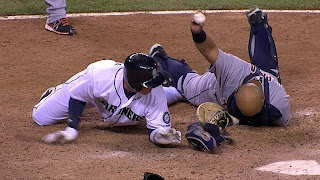 Posted by BaseSetCalling at 2:07 AM
Email ThisBlogThis!Share to TwitterShare to FacebookShare to Pinterest
Labels: 13 Update, MLB At Bat App '13, Topps Voodoo, Yeah I Read The Backs