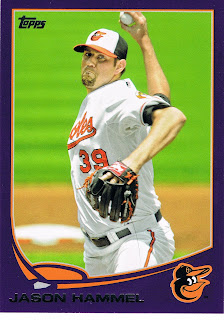 I think I purchased my last cards at Toys-R-Us. I had a good run, it was fun, we had seasons in the ...

Well, one season anyway. I really liked these purple parallels this year. Some teams looked just outstanding on these, when you see the cards. Sight unseen, hearing the description "It's a Purple-Orange card" doesn't exactly whisper 'sign me up' very well.

The red teams can really pop - 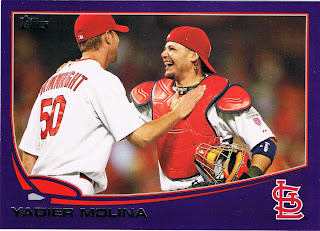 At first I thought to try for a team set of them on purple. The Purple Pirates. ARRRR! But I thought of a much better team set for these. A glance at my want list at the end of this post will probably reveal what that small side project is.

I will kind of miss Geoffrey though. He's the big giraffe that is the Toys-R-Us mascot, in case you forgot. Show me a grown-up who says they totally hate being inside one of their stores and I'll show you someone who needs to loosen up a little and let their inner child crack a smile for a few minutes.

I mean a lot of toys are fairly timeless, and the ones you liked might likely still be in there, grinning at you on your way through the toy maze towards wherever that particular store keeps their baseball cards. And then there is all the candy.....I try and move a little faster before the Swedish Fish can reel me in, again.

All the teams do very well on the purple parallel though, even the blue teams: 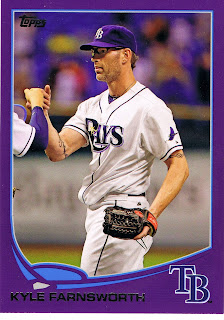 I noticed courtesy of Night Owl's thoughts on logos tonight that the Rays got the ho-hum effort from Topps there, with just their "TB" cap logo, rather than their sweet shoulder patch, an actual Ray. I mean several teams got a graphic logo, not lettering, on their cards, like the Red Sox with their red socks on every card. See what that did for them? Now you see what it takes to win a Championship there Tampa Bay? I suggest stopping down to 1 Whitehall Street in NYC with a suitcase full of bubblegum, or something. I don't see a red bird on that Redbirds card up there either, come to think of it.

But I was surprised at how the blue teams fared on the giraffe cards. I tend to use them for the  Rangers in my parallel set: 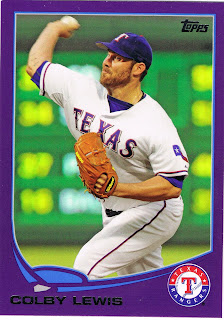 Because were the rather pedestrian Texas "logo" to sire the card border color, this would be the obvious result. Obvious? Yeah, silly, Red + Blue = Purple. Every actual recipient of products sold at Toys-R-Us knows that. I'm not sure what Red/Blue/Purple/Yellow/Green makes though. A single card rainbow? Where's Roy G. Biv when you need him? Hiding in the factory set perhaps.

I went to see the goofy ole giraffe again a week or so back. I wanted to verify for myself that Geoffrey wouldn't hook me up with more of these purple baseball cards for the Update series. They weren't showing up on my new baseball card master, eBay, and I kept hoping maybe Topps was running late on their deliveries to the toy syndicate.

But it was not to be. Instead I bought my first "Mega-Box" (post coming soon), which of course turned out to cost $5 more than at the Big Box store just two doors down, where I immediately went to seek out more parallels. I was starting to feel a little edgy and nervous. I guess I should have been happy they did do up the purple for Series 2, which was new this year I believe.

Maybe next year they will do all 3 Series in the royal color. I won't know, or care. My parallel project this year will be a one-time deal, I know that. I have an excellent new project dreamed up to start on for next year that is totally different.

Now there is one team that doesn't fare so well taking a stand down in toy-land: 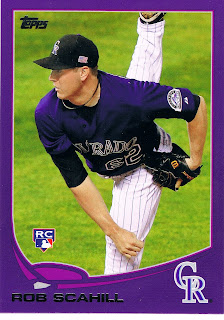 So with no more new purple cards to chase and it otherwise being the most expensive retail baseball cards of any possible place to purchase said item, I knew it was my last ride on the Giraffe. I surely won't miss their interrogation session at the cash register. They are way into their reward card deal, and I hate those things. My usual experience in such stores runs something like this:

"Do You Have Our Rewards Card?"

I'd rather not have a pound of plastic cards in my wallet.

"Here, the application is free."

I just want to buy this.

You don't need it for this.

"But if you have to return it, we'll have to have a record of it."

You mean if I don't get any cards I need, I can bring them back?

I gave at the office.

"Oh, would you like to donate a dollar to our Toys-for-Tots charity drive?"

Why don't you just donate the extra toys you don't sell?

"Just click Yes on the screen there, and then you can write your name on this shamrock giraffe here."

[hands me pen and little paper dealie to sign. Entire store deathly quiet by this point, all staring at the middle-aged guy buying baseball cards but not getting with the program....]

No, I won't miss that. I will miss these cards though. The White Sox cards can always use a parallel: 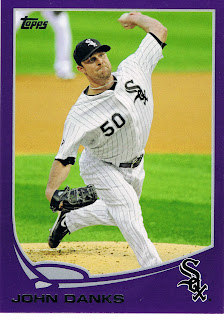 And sometimes, their cards really pop: 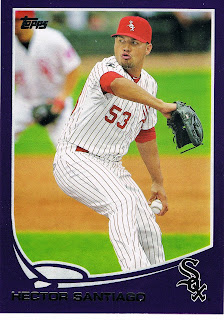 That really is a purple Hector Santiago card, not another contestant on the What Does It Mean? rainbow contest. I think the printers forgot to change the White Sox into the Grey Sox that day, and they also poured a little extra purple in the hopper that day too. These things happen in the Parallel World I live in. Surprises.

I put Hector in my project on a Target Red edition for obvious reasons, though that still didn't help the White Sox escape from last place this year. Only Topps has that kind of power, not me. I'm not sure we want to see a graphical pair of white socks on a baseball card though. Sorry Chicago, Boston just has so much more mojo in that department no matter how much you try to get it to rub off on you with special red uniforms. Trying to crib mojo from the Yankees never works either - just ask those guys up in Minnesota.

So if Hector Santiago there is already accounted for in my Parallel Project with a Bullseye card, does that mean it is up for trade?

It sure does. All the cards in this post are available, except for the Kyle Farnsworth. He's on my 40-card roster, just in case, as I never know how the cards might fall on a binder page. I need a good amount of these wonderful purple baseball cards. I also have a good amount of them I could trade to ... You.

It's that time of the year, folks. We can't have half-finished rainbows languishing around our collections now can we?

I know you meant well when you started that rainbow. It seemed so simple. You got a parallel card of your favorite player/team/league/whole set. You thought that would sure look nice with some more identical-but-different copies of that card sitting right next to it. But no matter how many times you stopped at that Big Box store with all the pretty young things inside, you just couldn't pull another segment of that rainbow.

So now the Hot Stove is warming up. You can go for that rainbow you've always wanted ... but you have to give up on that promising rainbow that just isn't going to make it. You'll have to trade:

I need these purple cards:

I have these to trade: