Flipping through the binder tonight, pulling cards for a subset I collect and share with y'all, an entirely different card elbowed those cards out of the way with this post-title's usual burning question. 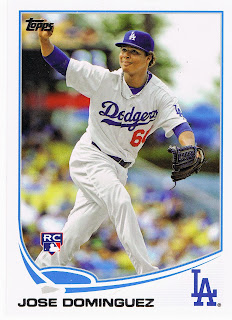 What IS that, off beyond Jose's left shoulder there? That big ole white space full of nothin'.

A map of Illinois; i.e. Topps suggesting L.A. should trade this young fireballer to Chicago?

The vortex created by a triple digit Dominguez fastball? (I think this card will enter the Dizzy Collection I started recently. It almost looks to be a The Pitcher Isn't Pitching card, but when you realize he did just let one fly, you wonder where the ball is....then the room starts to spin....I think I need to lie down now.)

An attempt by Topps at placing a giant asterisk on a card of player who briefly reached the Major Leagues after two PED busts in the minors, which had to be hurriedly airbrushed away when it was vetoed by MLB at the last minute due to all the impending circus-like "litigation" this off-season?

The baseball gods tapping Dominguez on the shoulder to suggest there should only be one "Little Pedro" in the game at a time? (He was shut down for the season with a quad strain after only 8 innings of work in June).

A hole in the Space-Time Continuum?

All of the above?

Posted by BaseSetCalling at 1:55 AM
Email ThisBlogThis!Share to TwitterShare to FacebookShare to Pinterest
Labels: 13 Update, Topps Voodoo, What IS that?