Meanwhile, out in the Bullpen

We get a baseball card there too. But just one, in S1/S2/Update at least. 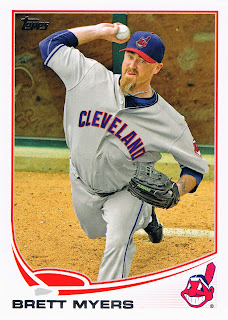 It's not all that exciting to get this Bullpen Card, but that's more because Topps likes to zoom in so much and obliterate almost all baseball context from every card now, so I like the cards that bring the set some variety, somehow. (I'm sure you've noticed this by now).

I am fairly intrigued to know what is happening on that back wall of the Bullpen though. 52?

This is likely to be Myers' sunset card, as he made it off the DL for all of 4 games this year, and was released in August. There is one big clue to this on the card - once you see a gray hair on a player's card, well, you do the math. Baseball General Managers certainly will.

I do have a hard time understanding the set this year in regards to the zoom, zoom, zoom. Zoom zoom. Who doesn't like to say the word Zoom? Anyhow, it seems markedly different than the 2011 set in this regard. I have realized I need to do a better job of figuring this out via more homework, and I have a plan. Unfortunately you won't see the results until next summer, because I will have to get my 2011 and 2012 cards nicely tucked away in a binder, and I have been too busy with those durn parallels to do that.

I often wonder what experienced card-collecting kids thought in the early 70s when the first live action shots appeared on baseball cards. I know in my first set (1975), I much preferred the action cards. They were almost more likely to be seen on the playoffs cards, and even the highlights cards, it felt like, but I treasured the ones I did find, and this remained true throughout my youthful collecting days. Playoff cards today are just dumb, usually. If Topps had any smarts about those they will put an image of Justin Verlander, In Action, on the Tigers' ALDS card next year, after 2 straight years of winning a Game 5 in dramatic fashion. But instead we'll get a bunch of Tigers mobbing together in the general vicinity of the pitcher's mound, maybe with Verlander visible, maybe not. And I've wandered a long way from the Bullpen. This is a bull session however...

Now here in the 20-10s, I think Topps probably has access to the best sports action photography of all the decades they've been in business. And we do get to see that on the cards, frequently. In fact, a posed shot in S1/S2/Update is a very rare item these days. The ball player photos on the picture cards are nearly all from a live baseball game, but are then zoomed in so far they effectively look like a posed card anyway. I just don't get it. Probably, a live action photo is cheaper than a portrait shot, as less photographer and ball-player time is involved to a huge degree. But I just wish we could keep a little more of the baseball atmosphere all around the player image. Many of the posed cards in Vintage sets did let you see a Stadium or Spring Training setting behind the player. This is now very rare any more in the baseball card standard known as The Topps Set.

Anyhow, that's my final on that, until next year sometime, when I can compare this across 4 sets at that point.

But, hey, it's past time to see another card. I did discover one other Bullpen Card this year: 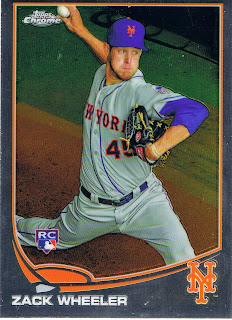 Which can only be discerned by the loops of cable up against the wall of the Bullpen, seen at the top of the card.

Most Rookies get a separate card in Chrome, and some collectors even consider the Chrome Rookie to be a player's True Rookie card. Whatever. I've never understood the attraction to Rookie Cards anyway, aside from the fact that I know it's not wise to just leave them piled in with the rest of the base card commons for ever and ever, just in case.

I recently finished binder-izing the '13 Chrome set (I just bought it, cheap), and will have several of those cards to show you, and too many thoughts on Rookie Cards. But this Wheeler card is the only one I can think of right now with any interesting context, and even this one is zoomed in so far that this isn't a very striking card, from a baseball atmosphere regard. I do like the harmony of all the parallel lines, and though they lead the gaze down somewhat, at least they flow off the side of the card, rather than straight to the ground.

I will give this card one bonus point though - you don't often see a Starting Pitcher in the bullpen, except in the Postseason at times. Makes you wonder just what Topps is suggesting here, though only an odd little baseball card blog would ask that question, and probably the Topps photo editor won't be answering it either.

Posted by BaseSetCalling at 1:22 AM
Email ThisBlogThis!Share to TwitterShare to FacebookShare to Pinterest
Labels: 13 Chrome, 13 Series 2, Bullpen Card