Tonight I ignored all the odd little oddities I've discovered on baseball cards the last few days and got back to work on a baseball card collection: Patch Cards. The thin kind, without any swatches on them: 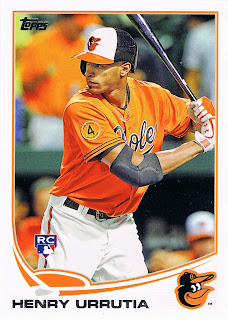 I happily discovered this year that the Update set has the first examples of all the patches seen around Major League Baseball this season. Who would have thought...the Series of baseball cards updating the 2013 sets would use pictures from ... 2013? I could have had a V-8 for a snack this afternoon too I guess, though I would prefer a Doh! nut. I love how the automatic spelling checker doesn't balk at the word 'Doh!' any more.

That "4" there is the memorial patch for Earl Weaver that the O's wore this year. For all of these, I'm sure we'll see more examples late next January when Series 1 arrives, and I will have to make permanent binder selections then, as I only want to keep one example of each patch I find.

I also realized this fall that I should pay a little more attention to the photos on the insert sets sometimes, as I discovered the Update minis include some 2013 images too: 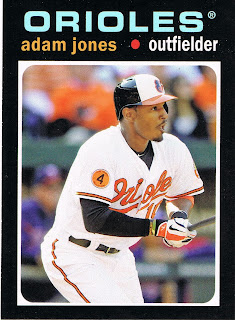 I know I will prefer a permanent keeper copy of that patch on the home white uniform, but mixing minis into a subset collection ... dunno how I feel about that. I'll probably just hope to see this patch again on some 2014 cards.

The '71 minis somewhat surprised me, in terms of image selection. I guess I was somewhat scarred by the Series 1 '72 minis. Even though I love 1972 Topps baseball cards and dutifully collected every little set of them Topps made this year with the design (S1/S2 minis, Archives, Day-Glow Archives, and the Chrome inserts), those first ones I discovered last winter included the Mark Teixeira which was a repeat image of his base card. If I had pulled that base and the mini insert in the same pack I would have probably been so mad I would have skipped baseball cards this year. That card kind of led me to assume the photos on the minis were mainly just a 'photo-dump' on the part of Topps, re-using any old photo they had lying around, such as for some of the vintage stars in the set. Perhaps right now you were just looking at Adam Jones' 2014 base card photo - we'll see.

However checking the '71 minis I do have for patches led to a few nice discoveries. Fans of throwback unis will see a few when I get around to assembling those for their fun binder pages; I haven't got that done for Series 2 yet and here I am already pondering next year's baseball cards. I also got more acquainted with this darn good, but not perfect, baseball card: 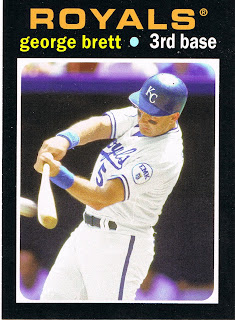 I just love that image capture there, showing the physics of hitting a baseball. But what is not perfect about this card, you ask? Well, doing my homework on this card led me to discover that the 'EMK' patch Brett is sporting there is a memorial for former Royals owner Ewing M. Kauffman, yes the namesake of their stadium now. The Royals wore that patch in the 1993 season, which was Brett's last. This led me to thinking about how nice it would be to have a baseball card of George Brett, with an awesome action photo from his final year of play, and his complete career stats. A perfect 'sunset' card, even if issued post-career. But this card just isn't that. The 1971 cards use the abbreviated previous year + Life style stats, so this card just has Brett's career stat line. Impressive as that is, I like looking at them year-by-year. But then that isn't all that feasible on the minis anyway. So this is probably the first baseball card I've ever acquired where I actually hope to see the photo repeated on another card eventually. The photo is that good.

The '71 minis also showed me another new patch, and the whole check-the-patches also revealed Topps using some dated photos on these cards as well. The Miguel Cabrera '71 mini shows a portion of the 'Sparky' patch the Tigers wore in 2011, for example. Anyhow, the Shelby Miller card displays another memorial patch this year, for Stan Musial: 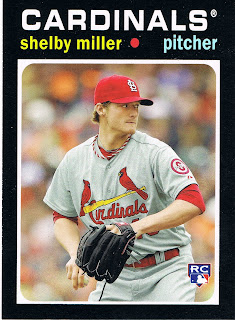 When I first saw this card, I briefly thought it might be a reversed image somehow, which I've never fully understood on baseball cards, because it looks like Miller is sporting a backwards "3" on his sleeve. But the actual red birds are looking correct, so that hunch was obviously wrong.

Fortunately, one of the base cards has a somewhat better view of this patch: 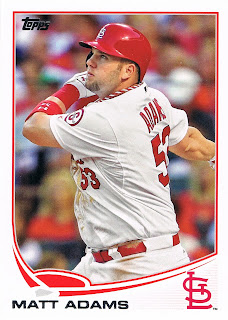 Though I suspect I will be hoping for a better shot of this one in 2014 Heritage.

I discovered one final uni-# memorial on 2013 Topps baseball image products while sorting some stickers for a trade: 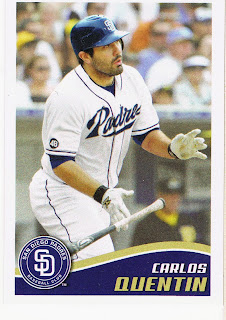 I recall that one on the Huston Street card, which I will use in my binder page for these. Another nice find on the Topps stickers; once in a while you can get shown these things in the strangest of places if you look at them right. Researching that #48 there (worn as a tribute to their former Bullpen coach Darrel Akerfelds) led me to a handy website listing uniform memorials maintained by the actual Baseball Hall of Fame, though they admit their list is not complete. Perhaps they should collect more baseball cards.

The base Update cards included one more with a traditional seeming, basic number - 19: 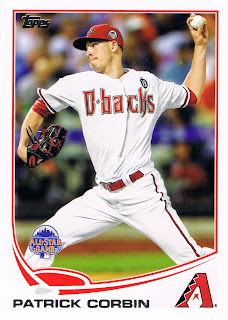 However that one is not for a baseball player; rather it pays tribute to the 19 members of a US Forest Service "Hotshot" crew killed fighting a forest fire in late June in Arizona. My father fought forest fires in his career. Thank you, Arizona Diamondbacks.

Aside from baseball's long tradition of wearing memorial patches, there are a few other varieties: 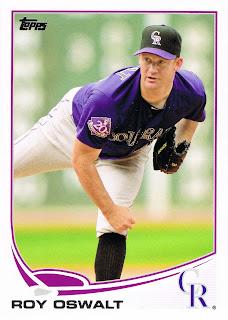 Going forward, I think I might use my editorial prerogative to just reject anniversary patches that are simply too boring.

I will have a tougher time considering this patch worn by one team per year: 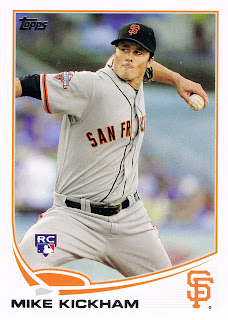 The 2012 World Series isn't one I'm very excited to memorialize, though I find it a touch ironic to see a Rookie sporting this one. I'll probably just get over it and replace it with a better example next year, should I find one.

I can't always decide what to do with a basic team logo appearing on player's shoulders for this collection. But I do like seeing new patches, and the main (only?) new team shoulder patch in MLB this year was worn by the Houston Astros. The Astros had probably the fewest cards of any team in S1/S2/Update, at 23 or 24 cards not even reaching a full roster. For their Series 2 cards Topps dutifully rolled out their new duds, though generally with that tell-tale satiny sheen their software wizards just can't hide. So this might be one of the first "real" on-card appearances of their new, old, logo (their old, new logo?) - 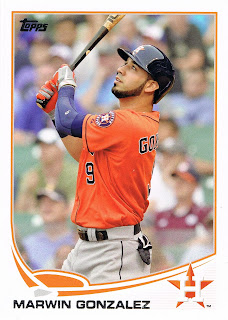 That logo is almost saying "there's a new sheriff in town" ... except, of course, there wasn't.

Now there is one team icon - it's not their logo - that I love every time I find it, and I hope to assemble a whole binder page just of variations of this one. I have a real gem example of it I found that I plan to show you next year. But meanwhile, this new Ben Zobrist All-Star card will definitely help move such a Ray page to completion: 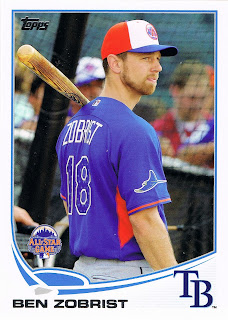 OK, so all the Ray patches are blue actually. And even though utility reserve Ben Zobrist didn't actually appear in the All-Star game, I think that sweet Ray sailing the American League blue uni seas there scored Zobrist this bonus baseball card appearance. Which is way cooler than the card for your 2013 Houston Astro American League All Star Jason Castro, which doesn't even exist.
Posted by BaseSetCalling at 3:00 AM
Email ThisBlogThis!Share to TwitterShare to FacebookShare to Pinterest
Labels: 13 Update, Patch Card