A Card That Really Confuses Me 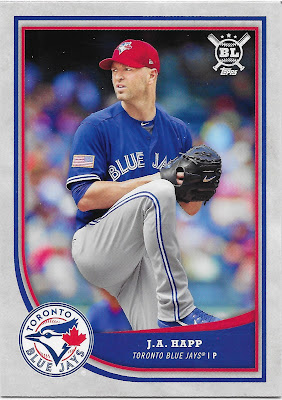 I am only partially sure that this is a card from a Canada Day game in Toronto. That would perhaps explain the rarely seen, on-card, red Alternate Cap. One of the only other cards to show one this year is .... J.A. Happ, on his Series One card. But that card shows the red cap more as I would expect on Canada Day,  paired with the red Alternate Home Uniform. ?

And possibly, the Jays allow their American players to display an American flag patch on that day. ?

But why is the flag flying wrong? Sure, lately our country is pretty much the biggest example ever conceived of what is called a "Black Comedy" - is J.A. Happ trying to signal his distress? He didn't want to be traded back to The States, once again?

Or is this a super rare Reverse Negative card, a nearly impossible pull that accidentally slipped out of the Topps printing plant during a secret test run, unknown to everyone until an eagle eye collector pulled it from a pack? No, that never happens these days - there is a special checklist for such things, now.

Later this year, the Rookie Card Flood is sure to wash up upon our card stacks a deluge of cards from some kid named Vlad, Jr., playing in Toronto. What flag will he have on his sleeve? Russia?

Wait a minute, it's coming to me - I should have saved this post for June 14th. Flag Day! That must be what day this card is from. Oh, wait. Does Canada have a Flag Day? I suspect possibly not; I mean, they eat Maple flavored everything all day, every day - why would they need a special day to remember their really cool flag?

Not all that long ago, at least in terms of posts on this sadly neglected blog, I wondered how another set of baseball cards would handle the conundrum of using a national flag icon amidst America's national pastime, for a team technically from a foreign country. Bitch and ye shall receive, is one of my mottoes, and in my very next re-pack my question on a now basically obscure 16 year old set was answered. 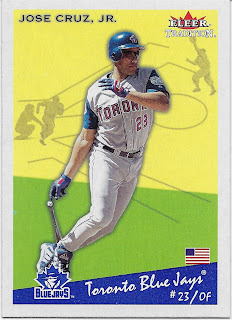 Now I will have to find a 2002 Fleer Traditions card for a native born Canadian player, playing for Montreal or Toronto, to see if the set designer was as nit-picky about baseball card details as I am (seems highly unlikely). Jose Cruz Jr. is from Puerto Rico, so probably he is entitled to an American flag on his Canadian baseball card, I mean, I guess. But really I will need a card from these cats on the Expos back then, with names like Colon, Galarraga, or Guerrero - what flag will they get?

I think that might take awhile, but then I have been feeling the itch to buy some $1 packs of recycled baseball cards. Ah well, let's get back to the year 2018...
Posted by BaseSetCalling at 11:19 PM
Email ThisBlogThis!Share to TwitterShare to FacebookShare to Pinterest