The cards everyone loves to hate....until one appears of their favorite player. Gimmicks. Set-breakers. You have to have them. You didn't even know you pulled one. You could care less. They make you rip packs like that mayor in Blue Jay town seeing what he can find down on the corner after work.

You gaze at them wistfully on eBay. You just can't decide what to think about Short Prints. Or what to do with them when you get one. Sure, you could send them to your favorite trading partner who collects That One Guy you pulled. But what does he send back? What is equal in trading value for a Short Print? We don't even get to know how "Short" the Print is.

So they sit there. They're a Short Print. You can't just put them in the binder with your other cards. They don't fit on the page right. You don't collect that team. You don't know what to think about them, or what to do with them. So they sit there, over in the corner of your card desk in their lonely little stack, on that box of base cards from 3 years ago that you don't know what to do with either, where you hope nothing will bother those weird little Short Prints.

And sit there. You don't want to open an eBay account. You can't throw one out. You're not really up for just adding it to the pile you're shipping off to that one trader. It's a Short Print. That's gotta be worth something, isn't it? I mean, you think you saw one on TV once, or maybe just on a non-baseball-card webpage. How often does that ever happen? People must love and desire these things somewhere.

But where? What do you do with the darn things when you pull one? You don't even understand how they play baseball in That League. And now you have a Short Print from it.

I have the answer you've been looking for. Trade it to ME!

But what can I give you back? What else but a Short Print. Check 'em out: 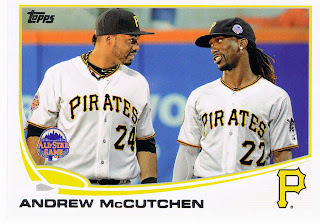 Cutch! MVP! Lovin' It there all googly-eyed with Pedro! If this card wasn't a short-print, there would be vandalized meme quotes drawn on this one everywhere you look. 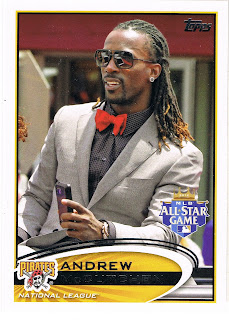 Cutch again! A Cell-Phone Card! I bet you don't have one of those yet! And a Bow-Tie Card. Now there's a Two-Fer for ya. Good luck ever finding this combo on a baseball card ever again. And ... an Earring! It's a Trifecta! 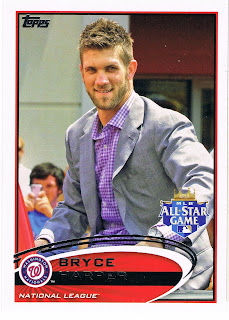 These silly dress-up cards just don't do it for me. Does that guy even play baseball? I never see him in the MVP voting everyone is always arguing about. He must be a League Official or something, the fan in the back there is more into his cellphone. Hey, it's a 2nd Cell-Phone card! Trade for these cards and you're on your way to a whole binder page! I can even hook you up with more sartorial baseball wonderment, check it out: 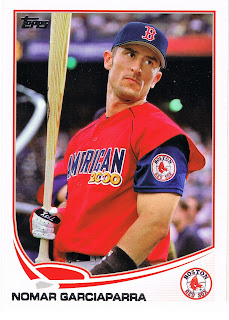 Good Lord. I'm thinking all the smart baseball players told the League they weren't feeling too good before "warm-ups" at the 2000 All-Star game. They'd be OK by game time in their regular uniform, but for now it would be ahh-ite if the the 2nd place vote-getter went out there and represented for them. Yeah, that's the ticket. Nomar forgot this option. He is not impressed. 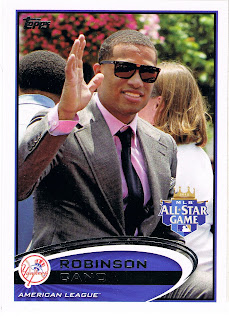 Now that's impressive. You have to be pretty frickin' cool to wear pink. I bet you don't ever wear pink. Robinson Cano though, he can Man-Up and wear pink whenever he wants. Even on a baseball card. Maybe he put on shades so no one could see him rolling his eyes all the time during the Fan Parade. I'm not sure just what is going on with all these fans who refuse to even watch the thing though. But Shades Cards are certainly cool. 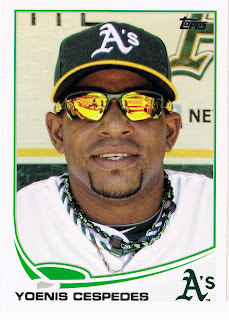 Topps certainly thinks so. They made a bunch of them this year. If you look closely enough, I think you can see my scanner in there, cuz this year's batch sure scans up nice. Go ahead, click on it for a better view. Careful though, you might need your shades first.  His necklace is even glowing a little bit, just extra coolness dripping off there. 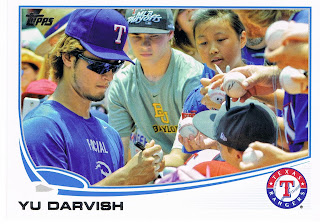 You know what else is cool? Signing autographs for kids. That really is cool. Maybe wearing cool Shades explains an autograph that looks like this: 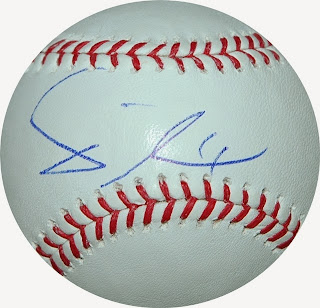 That's not a Short-Print! Nope. Wrong blog for that kind of thing, sorry. Let's get back to the baseball cards: 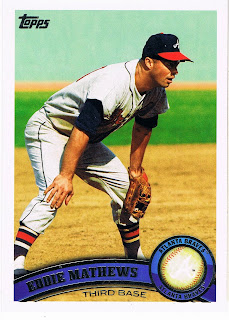 Now we're talking. Classic lines, classic player, classic socks. The spare, popular 2011 design, classic "topps" up there in the corner. What's not to like? Not sure what happened to the classic "A" logo on the baseball there though. Maybe it got rubbed off in all that great infield dirt on this card. Or maybe it's an uncorrected error card. A UER SP. Boom! Now that would be a card to chase. 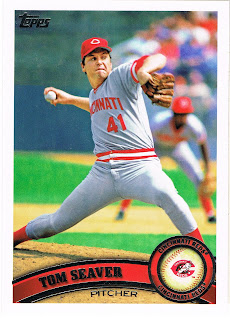 Hmmm. That picture sure looks familiar. Where did I see that one before? Was it here?

No, no, that's not quite it. That one is a print too though; it's hanging on walls these days in the Topps Wall Art Set that is to die for. That is one hell of a stretch Seaver had. I just know I've seen that same picture, hmmmmm....
I knew I had seen it somewhere — it was right there in the same box of cards with the _short_ print. Some Short Prints are shorter than others I guess. I don't know what to do with all those Topps 60 cards I have either. Can't see 'em too well in a room with those new light bulbs these days, can't burn 'em. Hmmmmm. Let's see some more Short Prints. 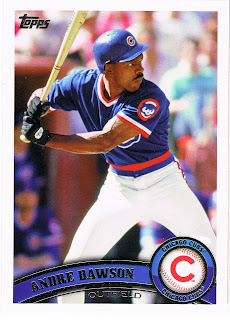 Everywhere I wander on the baseball related Internet, I see quotes from old Vintage pitchers about how they hated the batter when they pitched. Looks like The Hawk can give it right back to 'em. That poor little Cubbie there on his shoulder seems like he wants to keep his distance from that bi-cep. Damn. Keep your distance, I think it might explode. 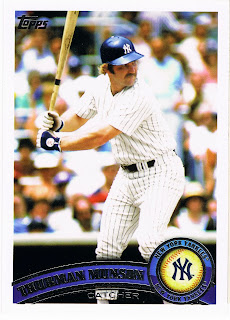 There's more cutting-edge Vintage classic retro-ness, or something. Hard to get more "baseball" than Pinstripes at the plate.

We all love to pull Short-Prints. They take you back to that first time Topps told you softly "first hit's free, kid" and you believed them, because scrounging up some loose change for a pack of baseball cards is about the same as free isn't it? Just like swiping your debit card these days ... you don't even have to take cash out of your wallet to get you some more baseball cards. That's kinda like free too, isn't it? Cuz when you get that Short Print Hit, yeah, 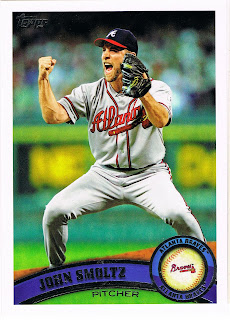 So how can you get one of these sweet Short Prints for yourself? Well that will cost you a Short Print. But which ones? You can't even read a Checklist without tripping over the Short Prints and the Super Short Prints these days, and why can't I just call them Variations like a professional baseball card critic? People slap "short print" on every other card on eBay these days.

In particular, I want some more of these Short Prints: 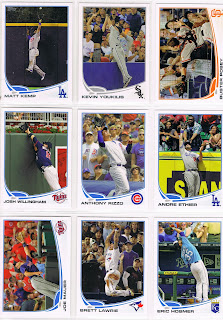 There's some others I'm interested in. I have a few more I didn't scan, like last year's Update SPs of the last 2 AL MVP winners, Miguel Cabrera and Justin Verlander. Yep, more MVP SP cards up on the block.

Cuz I love those Short Prints. I need new ones. Like the Cabrera autograph signing one from Series 2, and the Scherzer one where he's posed along with his awesome power slugging third baseman you may have heard of. Oh, and of course, your choicest Parallels can pry one of these away from me too. So as always, hook me up with your Camos, your Blacks, and your Pinks. Those new Sapphires are crazy-cool looking too. Trust me, you don't want them laying around near all your spare Short Prints for too long. You don't want to end up like that Mayor up there in Ontario, eh?