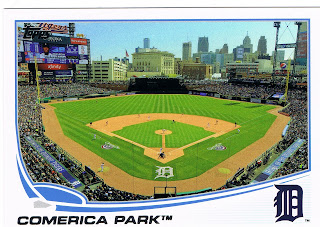 OK, I've actually had this one for a while, courtesy of a not quite 'local' FLCS, that actually barely had any cards for sale any more, like several I have been to this year. Not their fault, I know; and they did have this nifty product. The real news here is that I finally have a working scanner hooked up to my laptop. So now I can hook you up with my favorite cards without using a cell-phone camera. Hooray!

'cept of course I will probably still frequently just crib images from the web, cuz I'm lazy, and the whole scanning thing is a little bit of a PITA. You can look it up.

I wasn't completely clear on the concept when I read a few blog posts about these items, back when they hit the streets a month or so ago. One of the Cubs bloggers and one for the Nationals typed up the details for us - I'd love to read more about these sets. I was glad to learn these team sets could contain image variations (such as the Verlander shown here) from the Base Set, and exclusive cards, such as the Comerica card I did scan in (such great Lines on it). Doesn't the Sea Turtle look nice, swimming away from it's mama diamond?

You might find Stadium Cards boring. I don't. Send them to me....

So who is in the Tigers Team Set this year? I'll just borrow an image once more:

So only 5 of the 8 current Tigers in Series One make the Team Set. (2 Series One Tigers, Raburn & Young, were released last fall and are now with the Indians and Phillies). Ramon Santiago, Avisail Garcia, and Octavio Dotel are scratched.

Minus those 5 and the Comerica card and we could see 11 more Tigers in Series Two....or will one of those 11 be elusively exclusive in this special blister pack? This is the first Team Set I have ever purchased, so I am intrigued. Cabrera, Jackson, Martinez and Hunter (along with a Press Conference short-print = zzzz) are in Opening Day, and all of them should definitely be in Series Two and will most likely remain the same images. Austin Jackson sports a sweet uni variation for the Motowners, and Cabrera's great sliding-into-Home card is on the sell sheet for Series Two. We could see a variation out of the other two I guess, but I doubt it. Also intriguing is some pre-release checklist info that has a member of the Tigers' 40 man roster on a Series Two card that is not one of the 11 listed above. I will only share one more scan from these 17 cards; I wouldn't want to take away your fun ripping packs looking for new Tigers cards, now would I?

But I had to get this last one out to the blogosphere: 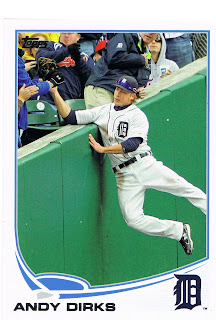 It makes me wonder if there is a bit of controversy on the horizon with this one. No, not over the Tigers fairly solid left fielder there, casually climbing up the wall and robbing someone of a Home Run with his eyes closed. He had a rough April, but he's had two minor injuries this year, one limiting his playing time in Spring Training. While Austin Jackson has been on the DL he has been batting lead-off a fair amount and has been slowly raising his batting average through May, which was a much better month for him. I'm sure callers to sports nutz radio shows and online post-article commenters probably say he should be killed because he's not hitting .300, but I can only laugh at all the armchair quarterbacks of the world (takes one to know one, I know). I can never remember his well-known negative - his drastic splits vs left or right handed pitching, but that's why I buy baseball cards. He bats left, this card tells me.

But what confuses me about this card is whether it qualifies as part of the Out Of Bounds series of Short Prints. Of course, that very name is a bit goofy - one would think only catching a Foul Ball would be a true out-of-bounds fielding chance, but several of the cards clearly feature fielders chasing fly balls in the field of play. Not that Topps would ever let nitpicky details like that get in the way of a marketing gimmick. Anyhow, I like the cards quite a bit, though I only have four of them so far. And yeah, I would be glad to take the goofy things off your hands, by the way.

Will this great Andy Dirks card then be a part of that short-printed batch of cards in Series Two, with a more ordinary batting or fielding shot as his Base card? I pretty much doubt that, but one never knows what Topps is up to (and I prefer it that way). Several cards in Series One were labeled as Out Of Bounds cards very early in it's release, such as the wonderful Jon Jay card and the also outstanding Ryan Raburn card.

I think this card will give others that same thought....or maybe I have found a great way to pick up those tricky Out Of Bounds cards....as if Topps would have such mercy on us. We'll see.

What's in your favorite Team Set this year?
Posted by BaseSetCalling at 1:14 AM
Email ThisBlogThis!Share to TwitterShare to FacebookShare to Pinterest
Labels: 2013, Comerica, Lines, Opening Day, Out Of Bounds, Short Prints