These baseball cards all feature the player wearing their team's "alternate" uniform... 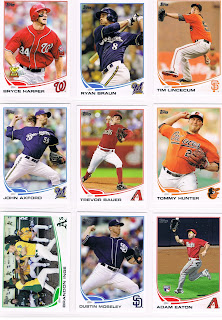 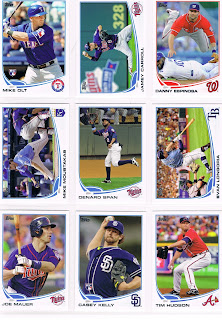 Washington leads this stat, at 7 this year. I think Topps has a thing for that team. There's that one player I heard about. 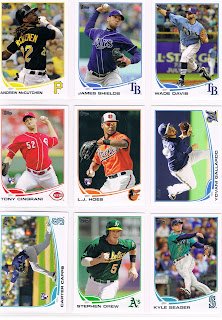 They are worn on a certain day of the week generally, though I don't obsess over which day. 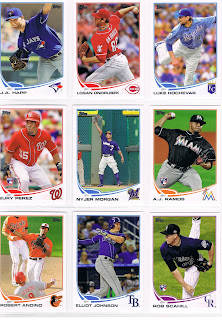 Rookies certainly get to show off their team pride via colorful uniforms. 14 of 32 RC-designated cards feature alternate unis, or 43.8%, a bit more than double the rate of veterans. But I wouldn't want to look at this stuff too obsessively. 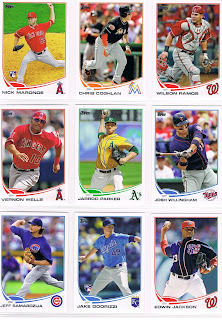 I do like the idea of the alternate road uniform the best. What I like thinking about that is ... who picks when those are worn? Only on the last game of the series, AKA the 'get-away-day'? Only when the home team is wearing theirs? Or can a team just pull their alternate road unis out for a surprise, like to break a team slump or something? From the cards here, we see only 11 or so in road uniforms, of 61 cards, or 18%. It's hard to be sure about the San Diego uniform, and I counted the blue Washington uni as their alternate on the road; just guessing. Nobody knows where the Angels play, on baseball cards at least, where they are always just the Angels®. I don't think they play in Heaven, given their franchise history and how things are going for them this year. And it's hard to be sure about Home/Away on some other cards too, like the suave Manny Machado down there. I'm not obsessed about it. 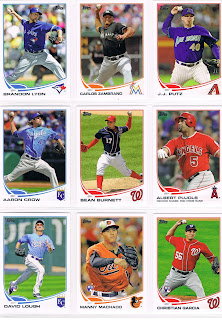 There are 61 cards here, featuring 60 players. Out of 310 single player cards in Series One, or 19.3%. I included the Baltimore Wild Card Card because they are wearing an alternate road uniform, their black one. Maybe they pulled that out for luck. That worked out well for them. 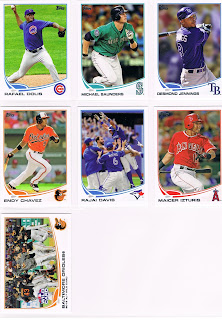 A favorite? Uniform, or card? I like the Orioles. Vibrant. Intense. You tell me that uniform didn't get them one of their one run "Buckyball" victories last year. At some point in some inning in some game, an opposing player caught that orange in his eye unexpectedly, and it slowed down his reaction time to do something important, and he screwed that up, cuz his eye was still catching trails off all that orange. Maybe it was giving him a flashback to hunting season, when he missed a nice buck.

Team runner-up? Probably the Seattle road uni on the Carter Capps card, though we don't get to see much of it. Not sure why, it just strikes me. I like their teal home uniforms and how they fit with the turtle's back - perhaps the best of all the Sea Turtles. Classy. And their road uni screws that up, so I like it.

Favorite single card of these 61? L.J. Hoes. I think that one will be in the running for Psychedelic Card of the Year, but I won't pick one of those till Update comes out. 2012 had a definite heavyweight champion card in that department. L.J.'s card looks like a night card, but was shot in the daytime. Matching shades too. Bad-ass. We'll need more imagery to tide you over as we go along, so here it is all by itself: 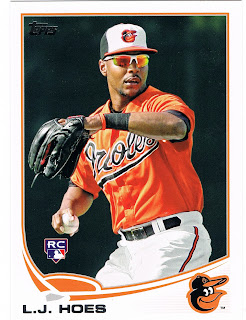 Card runner-up? I'll go with the Sean Burnett. You'll see that one again too; I'll liberate it from it's bindings for that post. Maybe scan at 1200 dpi too, instead of 600. What the hey.

Card second runner-up? All of the rest of them. I like all of these better than the other 269 cards in the Series. So I gave them their own binder pages. What else am I going to do with all the doubles I get? And I actually need a card pictured above, way back at the beginning. I need another copy of Ryan Braun's card #8. Oh joy. I told you it was tempting to leave him out of a binder page somewhere. But I wouldn't want to show you less than a Complete Set here.

I'm not sure if I will do this for each Series going forward. I do have a set of these from '12 Update. Haven't put one together for '12 Series 1 & 2 nor any from 2011, and I'm not going to collect Topps base cards before 2011, except for a very few partials sets I already have. In the long run I will probably build a set of cards of each alternate uniform for each team, though it will be hard to pick just one for that. Like the Sean Burnett card is a great card, but it doesn't show off the uniform as good as the Edwin Jackson card. Such hard decisions in collecting baseball cards.

I like color in baseball, and Topps got the colors in the design just right, imo, this year, so it's the perfect year to enjoy the alternate uniforms.

The whole exercise, which I have been fooling with since early February, has lead me to a key baseball question. It hadn't really solidified in my thinking until a post on Night Owl's blog happened to mention that many teams used a black uniform for a while, probably mostly when I was strictly enjoying baseball on the radio, without baseball cards. (Don't ask me why no cards, I don't know. I'll try and weasel around that question some other night). Now, there seems to be only Pittsburgh and Miami still using a black uniform.

OK, now I am going to veer off into a story from real / "3D" life. I don't have any pictures to sprinkle through here, so if you're getting sleepy you might just want to close this browser window now.

My work is very athletic, though it has nothing to do with sports. I am a tree-planting contractor, and by that I mean I plant tree seedlings on a bulk scale. Not landscaping, where you do this, then do that, half in the shade at times, moving around a yard with that tool, then this tool. My work involves planting a seedling, then planting another one. Anywhere from 2 to 8 per minute. Yes, per minute. It is very, very physical, and it is almost always done in full sunlight. If there was any shade, we wouldn't need to plant any trees, would we?

I have long understood that wearing dark colors during physical exertion will make you warmer. This is fine on a cold day. But on a sunny day above 55º, that is a mistake. Dark colors absorb heat, and that is the last thing you need when your body is trying to shed heat via sweat.

But I can rarely convince people working for me that this is true. Some of them just don't care, they aren't going to work as hard as they can anyway. So a little extra heat won't bother them, they will just work slower. They probably won't be around working for me very long anyway.

Others do care about giving their employer a solid effort, but are just pig-headead about some things, such as wearing black. One day this spring, we were working on a reclamation project, planting on bare sand. No soil type feels hotter than bare white-ish sand. It was already about 65º when we arrived early at the jobsite, on it's way up into the 80s that day (tough day). One of the guys with me that day had shown up wearing a black long-sleeve thermal shirt, black overalls, and a big puffy black hat with no venting. I kidded him that I had my black hoodie sweatshirt available if he was a little cold. He assured me that he would be fine, as my knock on his outfit sailed clear over his big puffy hat. I was sensibly wearing shorts, a wide straw hat, and a white T-shirt.

I let it all slide, but I knew what would happen, and I wanted him to learn something, as well as knowing this was the only way he ever would learn this. We set off across the sand, working steadily. It took about 20 minutes. "Can I go back to the truck?" He was completely drenched, huffing-and-puffing, and possibly about to fall out from heat exhaustion (smokers get hit by this even worse, and he is a smoker). Luckily, he had alternate clothes on hand as we work on the road, far away from home usually. "I don't know what I was thinking." Yeah, me neither. I gently explain the virtues of wearing white, but so it goes. When I return to hiring a large crew someday, I will make a very few mandatory "uniform" rules.

Perhaps this is what ended the black uniform craze in Major League Baseball. Baseball is played under some extra-warm conditions at times. And this is what I am wondering now about the Alternate uniforms pictured so far above now. Do the players like them? I know I wouldn't want to wear a black uniform in July & August. Even at night; I'm pretty sure the physics of heat absorption are the same regardless of light conditions actually.

And given all of the advanced sabremetric math results calculated about baseball these days, I have to wonder if anyone has ever looked into won-loss records with Alternate Uniforms on, and how that compares to that team's Home Whites and Road Greys. And even how the different colors match up. Powder-blue on the Royals must work better than dark purple on the Rockies.

Perhaps the folks at Uni-Watch already know (High Heat Stats, are you reading this?), but I just don't have time to wander around Googling things like this. I'm not someone that obsesses over things.
Posted by BaseSetCalling at 2:26 AM
Email ThisBlogThis!Share to TwitterShare to FacebookShare to Pinterest
Labels: 2013, Alternate Uniform, Psychedelic, Shades