Patches are an integral part of uniforms. I know this from my baseball cards. There are lots of different kinds of patches....here are those I found in 2013 Series One: 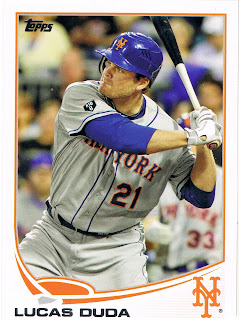 Generally the right shoulder is for a 'limited edition' patch which is only to be worn for one season. Tributes generally show up here, though not always. In 2012, the Mets wore this patch at home games as a memorial for Gary Carter. 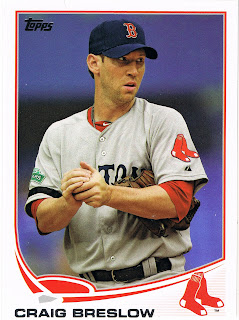 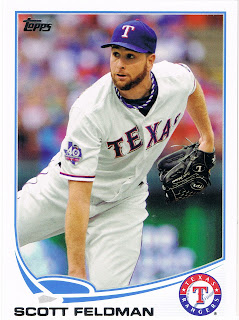 A common right shoulder patch is an anniversary patch. The Rangers celebrated their 40th anniversary in 2012.

Right at this point I would note that I am skipping over the Anthony Rizzo card, which has a good depiction of the great Chicago Cubs left shoulder patch. I like that patch, but I want a perfect example of it. 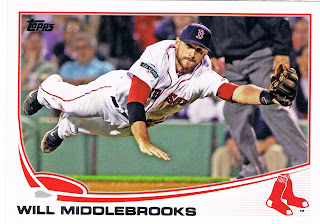 Another anniversary patch, for Fenway's 100th season. Great patch, great card. I would like to get a photo with a bigger example of the patch, but it would be hard to replace this card. 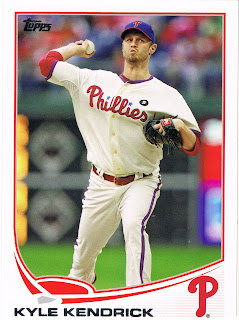 Patches aren't always on the shoulder; this one is another memorial patch. I'll quote Wikipedia here: "In 2011, the Phillies added a black circular patch with a 'B' in honor of minority owners Alexander and John Buck, who died in late 2010." OK. But, Topps, this is a 2013 set of baseball cards. I also just learned that my set of alternate uniform cards I posted yesterday will have to be increased, as this is the Phillies' alternate home jersey (missed a Throwback jersey too). The pinstripe uniform is their everyday home uniform. 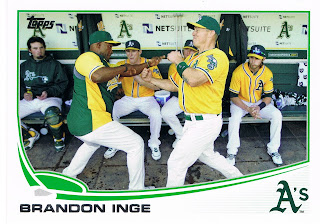 In the long run, this will probably not be the all-time greatest example of the famous A's elephant patch, as the patch's portion of the photo is a bit small. Sure enough, the Uni-Watch website has an FAQ question on this patch. I'd hook you up with a link that explains it, but that link is broken today. Which is a drag, because I want to read that story.

I should have rambled about this card yesterday, but I was sticking to generalities, posting 61 cards at once. How many baseball cards feature 2 different team uniforms, and a warm-up jacket? Where I live, a lot of people still like Brandon Inge, because he clearly played hard all the way through the Tigers' terrible 2003 season when they racked up 119 losses. He is at that point in his career now where his bat speed is decreasing, and he has always struck out too much. Haters are gonna hate, and he experienced plenty of that by the end of his time with the Tigers. But he is still in the game, serving as a pinch-hitter and super-utility man for the Pirates, as Inge can play any position. I would expect to see a card of him in the '13 Update set with the Pirates, and I expect that will be his final card. I hope it's a good one. But then I thought his card last year was his final card... 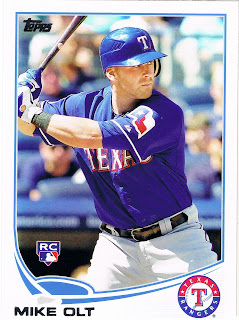 Another well-known patch, the Texas state flag. There are lots of examples of it on baseball cards. This was the first one I encountered sequentially in this set that is a good shot of it, and I will probably stay with it for a long-term collection. Especially if Olt lives up to expectations. 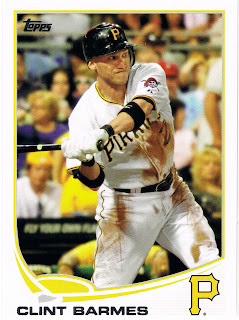 Also a well-known patch. I expect I'll find a better (bigger) example before too long. But I like cards showing a player that went for it earlier in the game, either fielding in the infield or a head-first slide. So I picked this one for now. 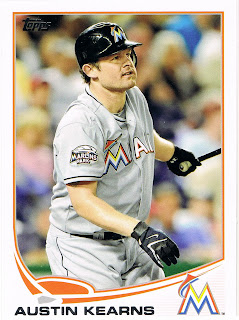 This patch is just ... sad, somehow? I wish I had more time to follow the Marlins this year. Total rebuilding projects always fascinate me. But those Marlins fans.....the taxpayers of Florida help pay for a new ballpark, and the owner guts the team (again), and can't keep professional front office help around — but hey we'll wear a neat patch to celebrate our empty ballpark! I'm looking for a certain card to use in conjunction with another post on this topic. 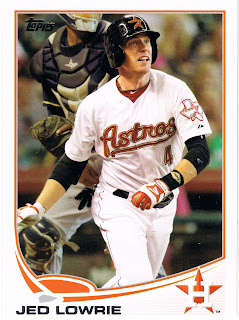 Hey, we play in Texas too. Last time you'll see this one on a baseball card, as they pushed the reset button on their uniforms for the move to the American League. Unless of course Topps were to use a 2012 photo on a 2014 card...would that ever happen? 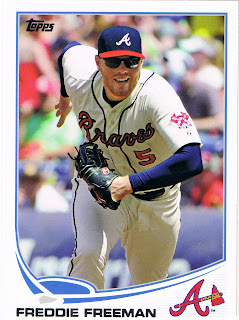 Another great patch, great card combo. I expect to find a better replacement for this eventually, patch-wise. 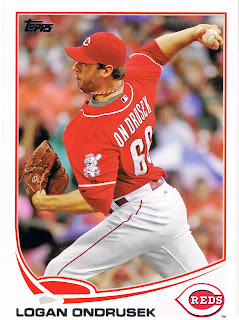 Good ole Mr. Redlegs. Can't have a set of patch cards without him, could we? 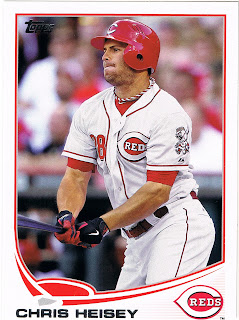 Indeed, he is so iconic I picked out an example on their home white uniform too. I will probably do that for some other patches as well. The 20 cards posted here will be the nucleus for a permanent set of pages across all teams, sets, manufacturers, and years, as I find great patch cards. 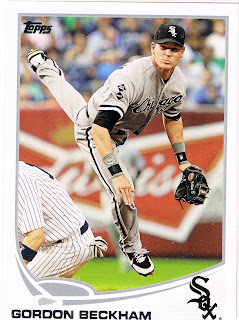 The "Bend-It" card. I'm always tempted to just start bending this card when I have it in my hands. Again from Wikipedia: "The double diamond patches pay tribute to Bill “Moose” Skowron, with the initials “BMS”, and Kevin Hickey with his nickname “HIC MAN”. They were both former White Sox players who went on to work for the club for a long time. I expect there could be a better example of these out there, but this is another card I would be loath to replace. There are slight variants of these patches on their other uniforms, but I won't be Chasing picture cards of those. I'm not a White Sox fan at all, and one is enough. I do admire their new manager though. 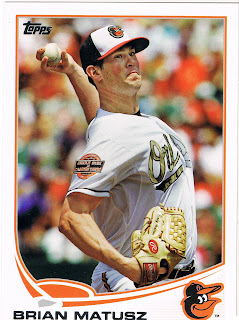 This one says "Oriole Park at Camden Yards" I believe, and I believe I will find a sharper focused example of it eventually. Not sure if the Orioles will always wear this patch now, but I guess so. 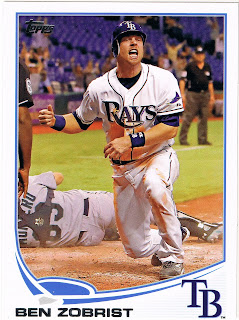 The patches sure do tend to show up on some good cards, eh? I love the Rays patch, but I have already found a better example on a card released after this one. Sorry Ben, though you will always get a lot of glory from this card, even if it seems there are almost as many umpires watching the game as paid customers. 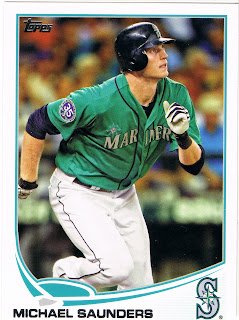 Another anniversary patch. Teal on a white-edged card. Classy. 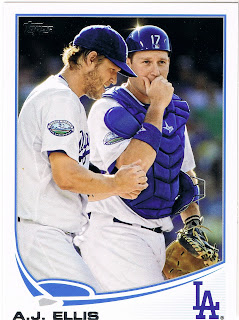 And the patch doesn't even have to be on the player named on the card. Dodger Stadium anniversary patch. 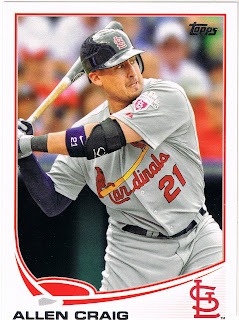 You win the World Series, you get to wear a patch to remind everybody. Seems fair enough. The Cardinals pick the left shoulder, where they don't normally have a patch. 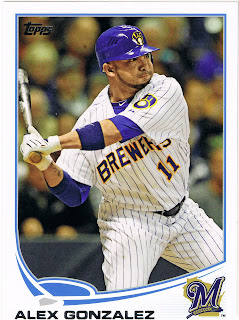 Yeah, I typed that I wouldn't use patches that just repeat what is on the player's head. I lied. I will definitely never get too concerned about it if that logo on the card ever appears on a patch, however.

So there ya go. Your next new patch fix arrives in just a few more days. Hang in there.

In other news, I've made a little progress on typing in all these numbers from the backs of all these baseball cards just inches from this keyboard. I have a long way to go, but don't forget those parallels. I wants them. Also, I will soon be putting up a trade report. So some of you'll get to see your old cards you sent me, one last time. Unless, of course, you sent me your double cards. I am perhaps more likely to only send out only triple or > triple cards. That way I get to make binder pages like this one.
Posted by BaseSetCalling at 2:25 AM
Email ThisBlogThis!Share to TwitterShare to FacebookShare to Pinterest
Labels: 2013, Alternate Uniform, Patch Card