My favorite in Series 2 so far

So do I have some friends down at the Social Club who know a guy who knows a guy who does deliveries to big box store distribution centers, a guy who likes to take his lunch hour down at the Bada Bing club and leave his trailer unlocked?

No, this card was in the Opening Day set: 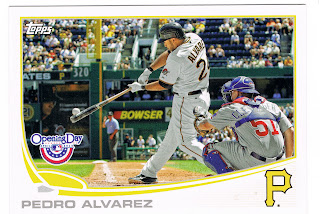 I am looking forward to new cards of course, but I thought I would share one with you. I'll be looking for a card to knock this one off it's pre-season ranking of #1. But I'm not sure I'll find one.

I love horizontal cards. I'll have some stats on those from Series One for you soon. So many great elements to this card...I don't even need to tease them out for you, they are all right there for everyone to admire in broad daylight. I'll just point out one: not many cards have two examples of the great Pirate shoulder patch on Pittsburgh uniforms, and definitely none have one on their home whites AND home alternate uni, the black one. A lurking patch.

I think a lot of you reading this have probably seen more cards than I have. So perhaps seeing a bat on a live ball is just another baseball card. I'm pretty sure this is the first card like this I have ever seen.

It is fun in the 21st Century to use these computer things to figure out exactly when and where a baseball card picture was taken. Someone, I think Nick @ DimeBoxes, suggested that someone should keep a list of such determinations, which is a great idea but not something I'll ever be able to take time away from sorting baseball cards to accomplish.

But I will contribute the date and situation for this one, actually a super-easy one as we have the Cubs @ Pittsburgh, using their back-up catcher for a day game. Only one game fits: July 25, 2012, a 3-2 Pirates victory.

There is a definite down-side to this ability though. That awesome baseball picture there makes it look like Alvarez is about to crush one to the right field seats. Perhaps it is better to just believe that.

'cuz that is definitely not what happened. Alvarez was up 3 times that day, and this shot could have come from any of his at-bats. Of course, with any long-ball batter photo except a few pics of a definitive home run shot, there is the possibility that the ball went foul. So this shot could have even come from Pedro's first at-bat, when he struck out.

Even worse is his second at-bat, when he grounded-out ..... to the Pitcher, Ryan Dempster.

The best we can pick from is his third at-bat, when he grounded-out again, but at least the ball went all the way to ... the second baseman. Which is where this ball looks to be headed. Especially with the barrel not on the ball that just exactly perfectly. Perhaps a little of that good ole 'late movement' on the pitch from Dempster, or his replacement Scott Maine in the bottom of the 7th, kept this great photo from being the great outcome one instantly wants to imagine for it.

Enjoying baseball cards in the 21st century is certainly a little different than previous decades. The information at our fingertips generally adds to the experience, but sometimes it's a little better to let the baseball card cast it's spell all by itself.
Posted by BaseSetCalling at 1:40 AM
Email ThisBlogThis!Share to TwitterShare to FacebookShare to Pinterest
Labels: 2013, Horizontal, Lurker, Patch Card, There's A Baseball On My Baseball Card