Everybody knows there is more than one way to organize baseball cards. You can do it by card #, or team..........or you can put them in a binder page any way you want. My binder pages might be a little different. But I like to look at my baseball cards and ponder what I see.

So I'm going to start a series of posts mostly of binder pages. I'll probably just keep on posting them till I get home from my delayed trip to my Friendly somewhat Local Card Shop for my first Series 2 fix on Wednesday, though I probably have a couple more Series One single cards to discuss as well.

One thing I really like on baseball cards is the not-everyday uniforms found on just some cards. I rarely get a chance to watch TV with baseball on it. Worked straight through yet another Saturday afternoon of MLB on Fox again today; don't have Fox Sports Detroit, nor ESPN either. I do hope to someday be lucky enough to watch some of a game featuring throwback uniforms, or even just a game with a team in their solid color "alternate" units, which I'll examine here tomorrow, without calling the waaaaaambulance. I don't miss deluxe cable TV in the slightest....baseball is great on the radio, and when I wonder what the game looks like, I crack open a binder: 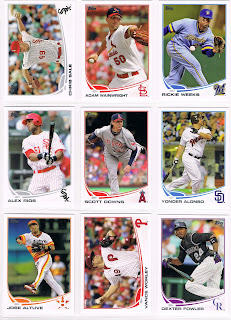 On those last 3, I have to wonder if Topps plays Tic-Tac-Toe with their binders up at Topps HQ, something I alluded to yesterday in my I-need-your-parallels post. If you were to leave a blank spot at #7 this year, those three cards would make a diagonal on a binder page.

Now on any of these posts, if you think I missed a card or added a wrong card, please pipe up. I especially struggle with some of the white uniforms - without watching baseball players on TV all the time, I don't always know for sure when a white uni is some variant of the team's every day home uniform. Particularly when they used to sport pinstripes, but now they don't, or vice-versa (Astros?). But then I've never been a big fan of the pinstripes anyhow.

A favorite? Probably Altuve, easy choice. All the bonus details on his card certainly don't hurt — the casual toss to first, great lines, the blurred lurking orange-man...the best leg stripe ever makes the whole thing work even with his glove covering lotsa the glory on his torso. Topps gets it right for a change too with the orange framing of the card.

I also like the straight-up 70s-ness of the Worley card (even if I'm wrong on that), Adam Wainwright's single Cardinal black hat, and pretty much everything about the Maybin card. It's great to see the old Brewers logo, though I would always be up for seeing it done more prominently. Their block-M-grain-Wisco on every card just makes me think the Brewers deserve the year they're having with that boring, risk-free logo they use now. I mean, would you want to wear that? "Hi, I'm a boring Brewers baseball guy." And of course it is cool to see some powder blue action; Rickie Weeks has that all to himself in Series 1. Rickie could use anything of singular distinction the way his career has been turning lately.

A case could be made that Wainwright is just sporting an alternate uni look, as the web informs me that the Cardinals wear that hat every Sunday at Home. But it is a throwback hat. I'll probably put him on my Alternate Hat page too, which otherwise has too many Rangers to post for Series 1 only. Similarly, I'm not sure if I want to count a card as a Throwback Uni card if the main "old time" element is just special striped socks as on the Sergio Romo, Daniel Descalso, and Wade Davis cards. And I can't really say the Rays are eligible to even have a throwback uniform yet, unless perhaps the word Devil appears.

The Michael Young card makes me giggle. If I were to ever buy a mini bobble-head or a little plastic baseball player figurine or were to watch MLB anime, if such a thing ever exists, I am positive that is how the Texas Ranger uniforms would look. And then I would giggle even harder. I just wish some Rangers players would go the extra few yards and sport red-white-and-blue wristbands just like my favorite bass player, but that would probably only ever happen in San Francisco, a team which has nothing whatsoever to do with red-white-and-blue.

And finally, the Chris Sale card is just simply a great card. You can rarely go wrong with a horizontal card; it doesn't matter what uniform he would be wearing. Same for Worley, though Sale would probably win a matchup every time. Especially with Worley being probably the only 2013 Opening Day starter currently at AAA.

The not-so-good? It's unfortunate that we can barely see the old school halo on the the Scott Downs card. Otherwise, this question is a no-brainer with a one word answer - "vest". Black, no less. Sad on an otherwise pretty good card that will be part of another post soon. I'll ponder the black uniform in general tonight....tune in then for more baseball television, via baseball cards.
Posted by BaseSetCalling at 11:42 AM
Email ThisBlogThis!Share to TwitterShare to FacebookShare to Pinterest
Labels: 2013, Throwback