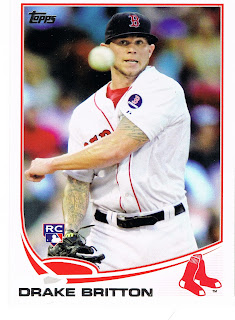 Perhaps, I deliberately fooled you with that title there. That is just how I think of a "Patch Card" - not one of those goofy 'Manufactured Patch' cards, which is a name required to differentiate them from the cards most collectors associate with the word 'Patch.' Those are all in high-end sets that both bore me and amuse me, and make me feel sad all at the same time. The word 'high' seems fitting at times.

Anyhow, this Drake Britton card from Update shows a nice example of the Boston Strong patch the Red Sox players wore this year. Going forward there will be a lot of cards in all sets featuring an image or pieces of this patch, or replicas of it, and fakes, too.

I like the Britton card even though he was not part of their postseason run. It looks like we have another The Pitcher Isn't Pitching card, though that can only be about 99% confirmed with the usual zoom-to-just-the-torso approach. But I don't think he is standing on the mound and this is a fielding shot. I had no idea who Britton was (promising rookie southpaw reliever it turns out) until I pulled this card, which is of course why I buy baseball cards, particularly these worthless 'low-end' ones. Of course I had to flip the card over to figure out what position he plays, though I am always happy to find a card of a pitcher not in the act of pitching, since 99% of them are the opposite of this one.

There is one more card with this patch in Update: 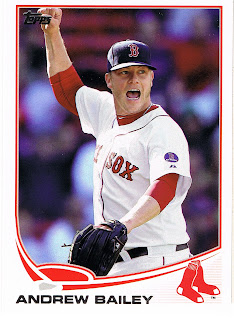 That's obviously a Closer's card, since they are the only players shown celebrating anything, aside from the Walk-Off cards for the hitters. I do like that theme Topps has developed with that well enough I guess. But such things shouldn't run forever in the world of baseball cards, methinks.

Bailey was also not on the playoff roster, as he is on the 60-day DL. The Red Sox had to use several players as their Closer this year, before moving middle reliever Koji Uehara into the job with spectacular results (check out his 2013 pitching stats - 0.565 WHIP, 11.22 K:BB ratio). As a Tigers fan and general Baseball fan, I can only wonder how much luck will continue and even increase to determine team results, in this power pitching era. The Tiger's chose to attempt to move a rookie into the closer 'role', which didn't work out in that as a rookie, Bruce Rondon wasn't quite ready for the Major Leagues until late in the season, after several call-up attempts, and then finished the season on the Disabled List. Just as Bailey did, who was a player-type all teams desire now: a "Proven Closer." With pitching injuries at all-time levels, will the random chance of when ligaments stretch too far begin to determine the standings in each Leauge? Do they already? The old adage "You can never have too much Pitching" seems more true than ever.

Collating the Update set, I have discovered that Topps is partially on the case here, and I'll have some more to share with you on the topic, straight from my baseball cards.

And regarding the end of the World Series last night: Worst-to-Champion, one helluva feat, Congratulations Red Sox! I think my favorite part is from last March, when sports commentators are required to do something I know they don't like: predict the outcome of a season of professional sports. And really what the Red Sox accomplished this year is very good for Baseball as a whole because, as we all know: There's always next year.
Posted by BaseSetCalling at 11:35 AM
Email ThisBlogThis!Share to TwitterShare to FacebookShare to Pinterest
Labels: 13 Update, Patch Card, The Pitcher Isn't PItching