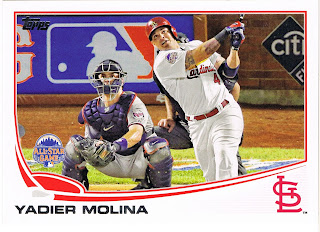 Kind of went with a Rip Challenge for tonight. Rip some packs and blog about the first worthy thing found. I wanted to rip a little for the near-to-last time while listening to live baseball.

I have always liked that official MLB logo in the background there; it's been around for my entire life of course. For a long time I have wondered which came first, that logo or the nearly-as-iconic NBA logo. So for tonight's post I finally answered that question. Major League Baseball came first, FTW.

This card is perhaps the best shot of it I have seen on a card in a while. It used to be more common when teams wore it as a patch on their uniforms. Now it is quite a bit more rare.

Aside from the great logo, this is the way to do a 2 player card. Both 2013 All-Star starting catchers, In Action. Horizontal action. The best.

Also excellent are the colors and lines, all harmonious. The line of Molin's torso flowing into the line of the bat on the logo; even Mauer's torso agreeing with the line, that leads us up, up, towards the now departed baseball. It's important on a card that the lines go up. And the colors - the red team on the right, vs the blue team on the left.

Perhaps this is the best example of the MLB logo on the All-Star cards in Update; it can be seen on a bunch of them. I initially praised these cards for being a bit more unique this year. Frequently Topps uses photos from the exact same vantage point for these. 2011 featured a whole lot obviously shot from the media pit near the visiting team's dugout. Even of left-handed batters, with their faces completely obscured.

So these straight-on-the-batter shots are quite an improvement. Maybe I'll figure out how many of them there are (several), as compared to repeat angles from previous sets. But I have a growing pile of cards to blabble about, so you might not ever see that.

I also like that the All-Star cards this year feature a fair amount of fielding action. I found an amusing one on that angle. I can't recall the result of Molina's At-Bat here, nor did I look it up. The National League was shut-out of course, and now the World Series is headed back to Boston. I like that connection between the Mid-Summer Classic and the Fall Classic, though in the All-Whine Internet age, people like to complain about linking them. I think they do that just to complain, not for any sound reason I've ever heard.

Also, if the fly ball Molina had hit on this card had dropped in for a hit, the back of the card would have told me this year, which is a nice touch.

One thing that doesn't match up with the game action here is that logo, since of course Molina made contact. Didja ever notice the ball on that logo? I bet you haven't thought about this. The MLB logo at first glance is 100% pro-pitcher. There is no possible way that hitter is going to make contact with that ball when it is already just 2 feet away and the bat hasn't left his shoulder.