Or maybe Qubi you. Guess which ball player is connected to a stamping in the photo and I'll send it to you if you want it. 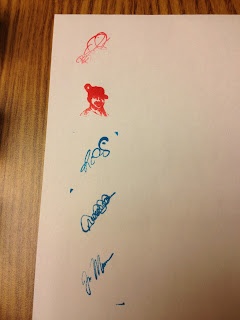 You might want to save out the photo and tell your computer to blow it up a little bit. Go ahead, cheat a little. I'm too lazy to do it for you.

I do want one Qubi - the one of Miguel Cabrera, which stamps a Detroit Tigers olde English "D". I would probably use it to stamp an olde English "D" on things. That would be fun.

That is what I presumed would be on these goofy stamper things. All 30 team logos, for a start.

Oh, I knew there would be some autograph stampers. I thought they would be the rare ones, for people to "chase".

Instead the autograph stampers are the base set essentially. And instead of just the Houston Astros getting the shaft, some 15 teams are left out of the logo set.

And there is an Ichiro stamper. His only appearance on 2013 Topps products.

I just don't get it. Of course, I don't get autograph mania either. I did like autographs on the front of my baseball cards, but that was kind of a back-in-the-day thing I guess. The day when people actually cared what their signature looked like, like that one at the bottom of the picture that will be easy to guess.

But why would anyone want to stamp a 21st century ball-player's illegible scrawl on something? Does Topps think we are really that obsessed with psuedo stalking our favorite baseball players that we would desire such a thing? Probably Topps does think that, because perhaps we are that obsessed.

So why did I buy these anyway? Well, it had something to do with Major League Baseball, and Topps. So just as I have been doing all of my life, I bought some to check it out. Bored I guess. And I want that olde English "D" stamper. So I chased it.

Sure, I could just buy one on eBay. But that is so boring. And also fairly difficult for me when I'm out on a job overrun with bear hunting bikers camped next to me. (Really). Nice folks. Not much into baseball cards though.

So I bought a couple-three or six of the dumb things over the last month. Unlike the ridiculously silly "hits" they keep inserting in all the packs of cards these days, fifty years from now a set of Qubi stampers will have not-yet-born Topps addicts drooling over the warehouse find of several cases of them in a dusty corner of some Chinese freight depot, where the little plastic doo-hickeys are made actually.

Just like the various old Topps test products sold only at that one store in Brooklyn do today.

Perhaps. Or maybe humanity will be melting down poly-acrylic-whatevers to fuel their levitating footware to get to work on time. Who knows. I don't.

I just know that when it says "Topps" on it, I'm probably gonna buy a little bit of whatever it is, just to see what it is. Anyone need a Topps 'Baseball Coin' of Steve Kemp? I thought not. I've got like a dozen of those goofy things too. They're starting to rust. But I can't throw them away. They came from Topps.
Posted by BaseSetCalling at 2:00 AM
Email ThisBlogThis!Share to TwitterShare to FacebookShare to Pinterest
Labels: Qubi