I liked this card a lot when I first saw it. It has a baseball on it. Those always catch my eye when I look at baseball cards.

It will be very hard to see when I finally show you the front of the card, but the card features a Special Uniform night. Not a Throwback Uni, but a special Uni some teams wear occasionally for Hispanic Heritage night, or however that team might phrase that certain theme night.

And I like cards where the player has at least a positive expression on their face, even if not actually smiling, though a player's demeanor isn't actually under their control during live ball game action.

I actually also like how Topps tries to show a player's position via what picture they pick out for them, though obviously they can't show only fielding images of the position players. And I really wish they would back off this idea for all the pitchers.

So I'll show you the back of this card first. 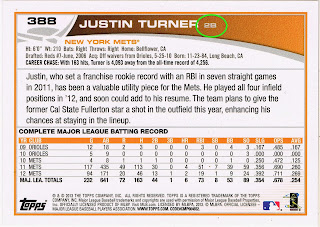 Keep this player's circled position in mind (2B for you squinters)...may I present Justin Turner: 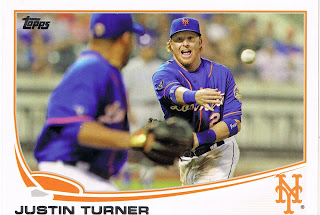 What is Justin doing here? At first glance, he is demonstrating his perfect-for-an-infielder last name and I could triumphantly declare Aww Topps, You're So Punny! again. Launch a series of such posts even.

But upon the dreaded further review....

...we have no base runner trying to interfere with Justin's seemingly routine handling of a routine ground ball. Instead we have a blurry, lurking opposing player holding on second base behind Justin, waiting for the fielder to make his choice. No turning of any double play here. Although Justin has his eyes squarely focused on the photographer, err, the first baseman, his throw looks like it will sail off towards the pretty ball girl along the right field fence, unless Justin has a truly wicked curve ball. And this card collapses in a heap like an over-eager rookie swinging for the fences.

It does appear that Turner will stick around in the major leagues, after a decent enough season this year, improving his batting average 31 points in an around-the-infield utility role. Topps did miss the expected move to the outfield, where he only appeared in one game, so the Topps scouts were a little off there, as they were on several elements of a great baseball card. A great Special Uni ("Los Mets") - wasted. Great horizontal fielding shot - of a probable error. Possible visual pun of the entire set - nope.

But I'm sure he'll play second base again. There's always next year, Topps.
Posted by BaseSetCalling at 1:17 AM
Email ThisBlogThis!Share to TwitterShare to FacebookShare to Pinterest
Labels: 13 Series 2, Horizontal, How Not To Do It, There's A Baseball On My Baseball Card, Yeah I Read The Backs