Joy of a Completed Binder Page

Well I've been wanting to type that post title for a long time now. A title I borrowed from the always entertaining Card Junk blog.

I have been buying packs, single cards, lots of cards and have sorted them and typed out their numbers and re-sorted them and have finally completed the first page of my Parallel Project. 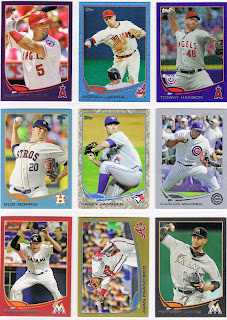 I have had several pages stuck at 8 cards for quite a while now. Henderson Alvarez no-Hit the Tigers on the last game of the regular season, and now he was no-hitting this project....until a lot of Series 2 Gold cards came in, and I decided to re-check each page in the binder. I had a /62 Black border card of Alvarez, but I also had one of Juan Francisco, and I was giving preference to the horizontal card on a slot for a Black card — my favorite of the parallels this year. Probably it was the Greg Dobbs card that became the keystone of completing the page. I had him in several colors ... I sorted the stacks .... I discovered a new /2013 Gold of Francisco ... but I already had Dobbs on the page for Gold ... I found a Target Red of Dobbs ... Get Down! Page Complete!

I especially like this page because it doesn't use any Emerald (my least favorite), thanks mostly to the /10 "Silver Slate" parallel I picked up on eBay. It also helps that I could use a card from the /2013 Blue Foil parallels from Opening Day, which is true on most pages in Series 1 & 2, but not quite all of them.

Along the way I discovered how tough it can be make a nice-looking page with these cards. As the difficult cards (Pink, Black, or Camo) on a page arrive, I can start placing the more easily acquired parallels. I realized I would have to buy the low /x parallels of common players and use the most printed parallels (Emerald, Wal•Mart Blue, Target Red) for the stars. I got lucky and pulled the Pujols card from a blister pack at Toys•R•Us. (Thanks Geoffrey!)

However when I can place the Red & Blue parallels I was surprised to learn I couldn't bring myself to just use any parallel I had laying around. I couldn't use a Target Red parallel of Asdrubal Cabrera up there....red-on-red does not a good parallel make. I also realized that the team colors and card border parallels are a bit like being able to make your own baseball cards, at least in terms of the color scheme. 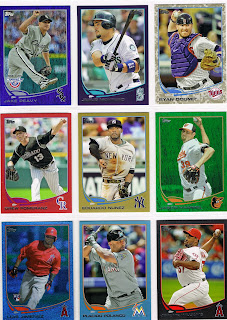 I might re-do parts of that page as I'm not sold on the Purple-on-Red of the Pomeranz card, which is actually one of the worst in either Series with print lines in the background. The Emerald would hide that perfectly; I like Orange-on-Emerald for the Orioles but I might order Hammel and Pomeranz to switch, we'll see.

Don't forget you can click on an embedded picture in a blog for a better view of it. I scanned these in their brand new binder pages where they will live for all eternity, but the upload process shrinks everything considerably. 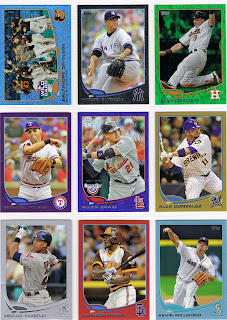 I still can't believe I finally have some pages done. Only 71 pages to go ... then 37 more for Update, and for that one I won't have access to 4 possible colors: Silver Slate, Blue Sparkle, Toys•R•Us Purple, and Topps Factory Set Orange. I'll probably have to cave in a little and use one white Base Card per page for that one.

So blow the dust off that PC Rainbow, Team Rainbow, Master Team Rainbow, whatever partially completed collecting project you lost interest in with these cards, and let's trade some parallels!
Posted by BaseSetCalling at 4:57 AM
Email ThisBlogThis!Share to TwitterShare to FacebookShare to Pinterest
Labels: 13 Series 1, 13 Series 2, Beguiling Binder Page, Let's Trade, Parallel Problem