It's World Series Day. I want to rip some new baseball cards. I keep hitting up the Big Box stores, and they still don't have them. It's like they think it's football season or something. I'll return to that shortly in another post.

I am going to satisfy my itch by participating in a Box Break of an Update Jumbo over at the Andrew's Baseball Cards blog: link. 2 Teams, $10. 18 Teams left to pick. You're sure to get some fun baseball cards. If you still agree that baseball cards are fun, like Andrew does, rather than just worthless hit-delivery systems, like most grouchy baseball card collectors. I am also sure Andrew will get some packs ripped for me while the Series is still in progress, unlike a bunch of slack truck drivers lost somewhere on their way to northern Michigan.

Words words words. No one clicks a blog link for the words. Here's a picture: 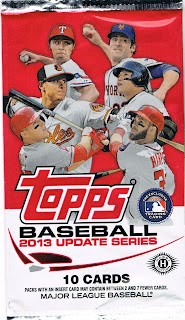 I think Miggy is going to lose this battle. Trout and Machado are gonna take him out for blocking them at the All-Star Game and the MVP awards banquet, and Miggy is just standing there admiring another Home Run, oblivious. Harper will try and get in the struggle, but he's not all that great at making contact consistently. Harvey is cocked and loaded, but everybody knows he can't throw right now.

That leaves Darvish. He looks pissed. Not a good look for a card wrapper there Topps, displaying a player showing an unflattering Game Face in the heat of battle. Does Grumpy Cat sell products?

But cards man, we need cards to look at. OK, OK...You sharpies may notice the special little H on the pack there. I did well with this pack; I pulled this card out of it, though I am too lazy to take it back out of the top-loader for you: 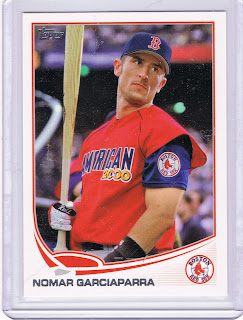 Nomar is not impressed. What is this set, the Grumpy Tween Gymnast edition? All those ballplayers looking up in the air rather than at a not even Barely Legal Twitter feed?

Oh, yeah, baseball cards. I'm sure you will enjoy ripping a Jumbo with Andrew. I bought one at my Friendly Local Card Shop, along with a couple packs just for good measure. Yeah, I collect the wrappers too. I'll show those off some day. The sweet slippery feel just won't translate across the wireless internet wires, but I'm sure you will remember it on your own.

I did pretty good on my Jumbo. I pulled one of the /25 Sapphires I am lusting after, a 1/1 printing plate, a Silk Collection, another short-print (McCutchen) and an All-Star Stitches I have already traded for a Camo. And this mammer-jammer: 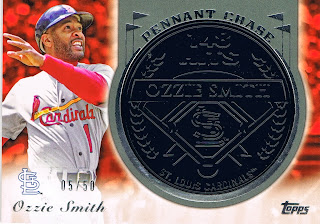 I'm thinking I'll trade that one to Andrew when he pulls the /62 HTA-only Black Border edition of the best Black&White card I've seen in about forever, the DeWayne Wise card. That will make a sweet 2 card rainbow. I hope he hits the White Sox on the random for his second team. Or, maybe I will, though with my first pick I couldn't pass up a shot at the sweet Scherzer/Cabrera short-print from the team I wish was playing tonight (and it stands to reason that I pull hits from the LCS winners). It's random. I have a little pile going for a White Sox trader....

What are you hoping Andrew will pull from these cards? Try out a Group Break and see what happens. You don't want Yu to throw that ball at you, do you?

Hey, maybe I can get him to launch that one at the front window of the next Big Box store too slack to stock their shelves on time...
Posted by BaseSetCalling at 3:20 PM
Email ThisBlogThis!Share to TwitterShare to FacebookShare to Pinterest
Labels: 13 Update, yeah I save the wrappers