It's taken me awhile to find another one of these cards. I know a great one in the 2012 set that will go in with this one, and the only one I found in Series 1.

Come to think of it here at the Update time of the year, there is an awesome such card in 2012 Update, easily one of my favorite cards last year. Few can match that one, I'll put 'er up near the end of the year and some Best-of-2013 lists. I'm still pinching myself over picking up a definite entry on that list yesterday, for 1/6 of what it was going for during the regular season. It's whale hunting season, amigos.

I'm happily collating my Update set, and happily discovering blog subjects. I really like the Update set. I learn a lot about Major League Baseball with it. It updates me. And I am interested in the middle relievers. Really. Yes, really. Not sarcastic "Really", a word that will be over and done by this time next year. Really. Seriously? Sigh.

I also like bonus cards of all the stars in the game, courtesy of the set of All-Star Game cards: 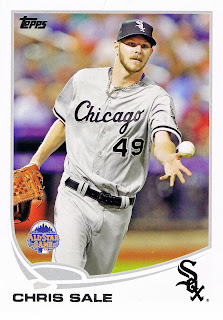 These have really improved some this year I think, with less of the pictures all taken from the same vantage point. I'll delve into that some other time perhaps.

Not a lot to add on this card. I just like any card of a pitcher not actually pitching, especially in the Torso Era, as I am starting to think of contemporary baseball card pictures. There are only so many positions that can be possibly captured when you take an "In Action" picture of a pitcher of course, but with so many cards all zoomed-in / cropped to above the player's knee, the repetition becomes yet more repetitive.

And the more standard, hey, look, the-Pitcher-isn't-pitching selection is a Pitcher doing something with a bat. A popular baseball card meme that I enjoy as well.

For this Pitcher Isn't Pitching Card it was rather too simple to track down the game details, seeing as the front of the card tells me what game it is from and all. So to share my special knowledge here and save you the 2 clicks-and-some-scrolling it takes to discover such things these days, that is Chris Sale carefully tossing the ball to 1st Baseman Chris Davis, getting an assist on a put-out of Michael Cuddyer's weak grounder in the bottom of the 3rd inning.

As Sale was the pitcher of record when Miguel Cabrera scored the 1st, 'go-ahead' run for the AL in the top of the 4th before an eventual 3-0 AL victory, Chris Sale is your All-Star Winning Pitcher for 2013. That makes me think he might have received a more dramatic All-Star card, but I'm very pleased with this one.
Posted by BaseSetCalling at 8:30 PM
Email ThisBlogThis!Share to TwitterShare to FacebookShare to Pinterest
Labels: 13 Update, The Pitcher Isn't PItching