I'm having a hard time recalling any 2-player cards I've actually liked very much. Aside from my favorites — the old "Father/Son" cards that I haven't seen in quite a long time, though professional baseball is often still a family tradition. There were probably some others over the years; if I could get at all of my collection perhaps I would find some more. 2-player Leader Cards can be OK as well.

This year Archives had the "Dual Fan Favorites", which at least dispensed with the convoluted statistical connections of the 2011 "Dynamic Duos" inserts, and simply puts two popular players from one team on the same card. In the age of massive player collecting, Topps gets one card desired by possibly two different player collectors.

Now in the 2013 Update set we have a fairly similar insert subset called "Franchise Forerunners," with 2 players from one team; one recent rookie, as if we don't get to see those players enough, and a somewhat older player. Let's check out the results: 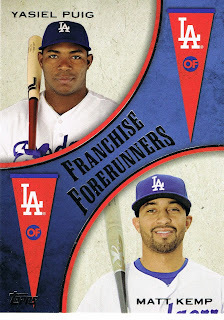 Hey, look, He poses for pictures now too. I'd wager pretty heavily that we'll see these exact mug shots again, possibly as soon as March when Heritage appears.

I like the colors. A baseball card can't go wrong with Red and Blue, especially for a Dodger card. Not too sure about the faux-concrete background there. And I like the idea of a pennant on a baseball card at least. But the result feels a little weak.

So we've got 2 profile pictures and a bit of graphic-ness. For once on a recent insert set, I'm not completely sure where the relics and autos go, though I am sure there are "hit" versions. But I don't really care.

Now many people consider baseball cards to be strictly one-sided products. But of course, I read the backs: 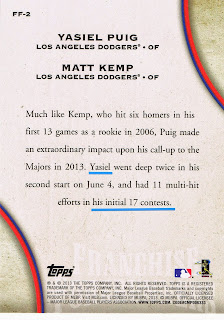 Pretty minimal, with more of that faux-concrete whatever to help you fall asleep faster. I only noted that  bit there about Puig's first 17 games to start getting my own estimate of the production schedule for these cards for future reference. I do like the nearly painterly use of Puig's first name for the second reference to him by the card-back-writer, which is used consistently on the other cards I have pulled so far. Yasiel, Yasiel, say it with me ... crib notes from Vin Scully if you have to.

I pulled 5 of these so far. The Puig/Kemp already has a destination, but I also pulled 4 - Cole/McCutchen; 5 - Myers/Longoria; 7 - Harvey/Wright; 9 - Cespedes/Henderson, if you need them. I do not.

This was my first baseball card to feature Wil Myers: 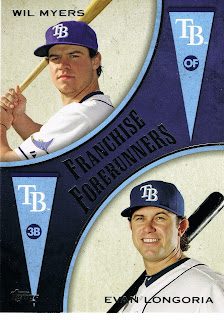 And led me to an education from another famous Will when I read the back: 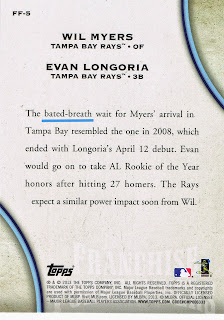 That card back initially made me mad. Surely bated would be spelled "baited", I thought, but it turns out to be a derivative of "abated", coined by Shakespeare. Baited breath makes no sense. Abated breath does. Oh, the places you'll go...

This next card really did make me mad however: 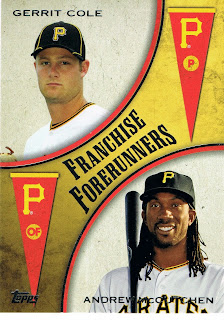 I'm not sure why Topps went with any use of the color Red on a Pittsburgh Pirates card. Maybe they thought the Pirates actually play across the parking lots at Heinz Field. Dunno.

What I do know is, this is just another useless insert set taking up space in the packs I purchase. I just can't warm up to this one after a pretty likable run of inserts this year. Perhaps, neither could Topps: 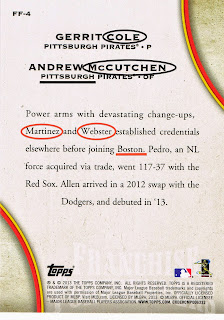 Posted by BaseSetCalling at 1:38 AM
Email ThisBlogThis!Share to TwitterShare to FacebookShare to Pinterest
Labels: 13 Update, inserts, Topps English, Yeah I Read The Backs